Invertebrates, or animals without a spine, are the masters of regeneration. Many animals are able to regrow missing or damaged body parts and some can even regrow an entirely new animal from just a small segment of tissue. If you cut sponges, planarian worms, and hydra into pieces, they will regrow complete and normal animals from most, if not all, of the pieces. Chop certain kinds of sea stars or hemichordates in two and both halves will grow into complete animals.

Nearly all annelid worms can regenerate tail segments and some can even regenerate their head. Some species of ctenophores, also known as comb jellies, can heal wounds and regrow new structures without generating any scar tissue. Some crickets and spiders can regrow missing legs and even some hard-shelled invertebrates, like crabs and lobsters, will regenerate missing appendages during molting. Nearly every animal phyla has members that are able to regenerate to some degree.

The vast regenerative abilities found throughout the different animal lineages suggest an ancient and ancestral mechanism for this trait. It is likely that the common ancestor of all animals was able to regenerate and this remarkable characteristic has been highly conserved in many groups. As humans, we have lost most of our regenerative abilities, and our research lab is interested in whether we still have the genes that are important for regeneration, as we share many developmental genes with all invertebrates. 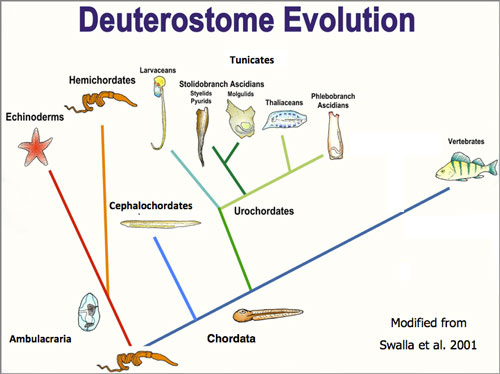 Fig. 2: Deuterostome phylogeny. Humans are vertebrates, to the right. Hemichordates are a sister group to the well known echinoderms.

Arguably, one of the most impressive regenerating animals is Ptychodera flava. This animal, also known as a hemichordate or acorn worm, is able to regenerate every body part. All acorn worms are marine animals that have a tripartite body plan with an anterior proboscis that they use for digging in the sand and mud, a middle collar region, and a long posterior trunk (Figure 1). Why is this animal exceptional when so many other animals also undergo whole body regeneration? For starters, P. flava is a deuterostome, in the same group of animals as chordates, which includes humans (Figure 2). Furthermore, P. flava shares numerous developmental and morphological traits with the chordates, including a hollow, dorsal neural tube in the collar region. Our lab has shown this structure develops in a very similar fashion to the chordate neural tube. In humans, the neural tube becomes the brain and spinal cord. Ptychodera flava is able to regenerate this structure after complete amputation.

Millions of people suffer from neurodegenerative diseases, spinal cord injuries, and limb amputations. Furthermore, aging and age-related diseases affect every person on the planet. Regeneration may slow the aging process and regenerative stem cells present feasible ways to combat a multitude of diseases and injuries. If regeneration is a conserved ancestral trait, it is likely that humans possess many, if not all, of the genetic switches controlling regeneration, but those switches have been modified or inactivated in some way over evolutionary time. It may therefore be possible to re-activate those pathways in humans using genetic models made from animals with extensive regenerative capabilities. Understanding the morphological and genetic mechanisms for regeneration in P. flava may yield clues to unlocking more extensive neural regeneration in humans. 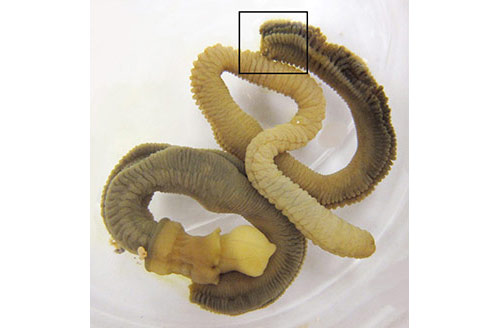 The boxed area indicates the regeneration site of the posterior half of the animal. To help reveal the genetic pathways controlling regeneration in P. flava, I am working with Dr. Billie J. Swalla at FHL, in collaboration with Dr. Alejandro Sánchez Alvarado of the Stowers Institute for Medical Research in Kansas City, to sequence, assemble, and analyze the regeneration transcriptome of P. flava. This shows all of the genes that are being turned on and off during regeneration. This is part of an overarching transcriptome project across numerous animal phyla to determine whether there is a common gene or set of genes expressed across all species during regeneration.

For this project, we collected P. flava from Paiko Bay in Honolulu, Hawaii or on the atoll of Tetiaroa, French Polynesia (Figure 3). I bisected healthy animals in the trunk region (Figure 4) and let the posterior piece regenerate (Figure 5). I extracted tissue from the regeneration site at nine different time points and isolated RNA, which we used for our transcriptome. We have completed the hemichordate portion of this project and our manuscript that details hundreds of up- and down-regulated genes, as well as the associated morphological events, is currently under review for publication. With these transcriptome data, we can directly compare regeneration of the neural tube to early development of the neural tube and ascertain whether regeneration is a morphological and genetic recapitulation of development. 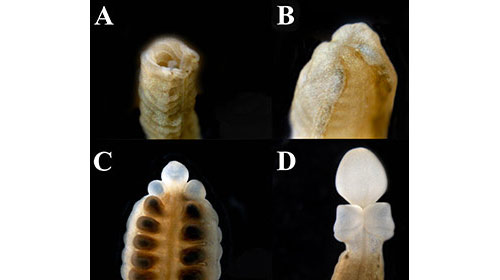 Our data thus far show that hemichordate regeneration employs some pathways that are not invoked during early development. This result is exciting because it means there are multiple ways to achieve the same biological structure and demonstrates developmental plasticity during regeneration. We are currently using these data to make probes to study expression patterns of neural genes during regeneration. We are also working to determine whether regenerative cells are originating from bona fide stem cells or whether existing somatic cells are taking on new fates in the regenerating tissue.

Shawn Luttrell is a 4th year Ph.D. candidate in the Swalla Lab in the University of Washington’s Department of Biology. Her dissertation research at Friday Harbor Laboratories is funded by a prestigious National Science Foundation Graduate Research Fellowship and investigates central nervous system regeneration in the deuterostomes. Her studies are focused on gene networks regulating anterior head and neural tube regeneration in the solitary hemichordate, Ptychodera flava.