The tides in the San Juan Islands are a remarkable feature of the landscape. Regularly reaching current speeds of 5 miles per hour, the twice-daily ebb and flood of water are an integral part of life here. They add an element of complexity to planning SCUBA dives or kayak trips, and even provide the propulsion for an occasional ‘float trip’ along a rugged shoreline. The tides fuel the rich biodiversity of this marine ecosystem that attracts scientists and tourists from around the world. The tourists are drawn to the marine life (the kelp forests, Orcas, salmon et al.) that benefit from the food and water replenished by the tides. The scientists also come for the biodiversity, and the diversity of researchers mirrors the richness of the surrounding marine environment. Our recent paper in Limnology and Oceanography1 represents the intersection of these phenomena: the tidal mixing of water masses and the mixing of researchers at UW Friday Harbor Labs. Fig. 1: A young couple admires the dynamic tidal mixing in Haro Strait from the westside Landbank. Labels highlight some of the features of the water motion.

The Friday Harbor Labs have a long history of research on the development and ecology of the local marine flora and animals. The NSF-funded Spatial Subsidy Lab, led by Dr. David Duggins and Dr. Megan Dethier, continued this ecological tradition by studying the origin, fate and influence of the many food sources available to animals living below the lowest tides in the San Juan Islands. I worked in the Subsidy Lab prior to becoming a PhD student in the Biology Department at UW. During that time, I led a study on the food sources available to suspension feeders (like barnacles and mussels) that are the subject of our recent paper. In an earlier paper2, Dr. Aaron Galloway — a fatty acid Maestro and then-grad student who is now an Assistant Professor at the Oregon Institute of Marine Biology — and our team determined that phytoplankton dynamics are an important driver of food quality and the most important source of essential fatty acids available to suspension feeders in the San Juans. The phytoplankton stood out from the mix of particulate organic matter (POM) from land, rivers and local kelp beds. But what factors control how much of these phytoplankton, or the other types of detritus, are available to be eaten? Trying to answer this question marked the beginning of a journey into the best aspects of FHL culture. 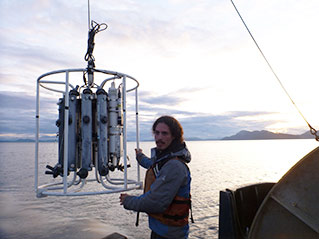 Among my favorite things about working at FHL are the many opportunities to BS (that’s Brainstorm, for the record) with students and researchers studying everything from earwig sex rituals to the effect of pH on the ability of a mussel to attach to a rock. On the same day that you can catch Dr. Richard Strathmann contemplating non-feeding larvae in the library, you can find research apprentices debating experimental design in the dining hall. In the Subsidy Lab, we involved students from many courses in our research that contributed to breakthroughs in our understanding of the system. In particular, a research project involving Elliott Jacobsen-Watts, a student in the 2012 Nearshore Ecological Research Experience, helped hone in on the salinity threshold that was so critical to this study. On a chilly spring day, Elliott and a team of Zoobots anchored the R/V Centennial (Captained by David Duggins, NOT the Zoobots) north of Waldron Island and collected samples during the incoming and outgoing tides for 24 hours. In these samples we watched the POM composition change from phytoplankton bloom-like conditions to sparse, detritus-dominated samples resembling the POM from the dead of winter — all over the span of one day. Upon further analysis we realized that the change in the POM coincided with a change in salinity from above to below about 30. Looking back through our seasonal data and many other data sources from the region, we found that a small salinity gradient consistently differentiated high and low phytoplankton abundance. Water temperature, fatty acid concentration and the ratio of phytoplankton to detritus were also higher at lower salinity — suggesting this salinity change had many important ecosystem consequences. 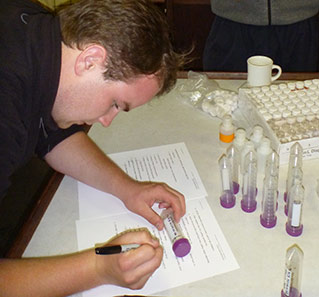 The change in salinity is driven by the mixing of water masses in the San Juans. Water from the Pacific Ocean (high salinity) comes in the Strait of Juan de Fuca and meets the fresher water influenced by runoff from the Salish Sea rivers, dominated by the Fraser River in British Columbia (e.g. Fig. 4). These waters are mixed by the strong tides in the San Juans. Under normal San Juan conditions (Salinity > 30), the deep channels (>100m) and intense mixing means that phytoplankton are rarely at the surface, close to sunlight, for long enough to take advantage of the abundant nutrients (Fig. 4, left panel). This limits the overall productivity of phytoplankton. Under these conditions, phytoplankton abundance is low relative to detritus and results in limited availability of high quality food and essential fatty acids. But when pulses of river water enter the San Juans and mix with the oceanic water, it reduces the density of the surface water just enough to resist tidal mixing. This creates a distinct layer of lower salinity water (24-30 ppt) at the surface that limits how deep phytoplankton can mix (Fig. 4, right panel). The phytoplankton in the newly stratified layer get very happy as they bask in the sunlight, soak up nutrients, and multiply. The salinity doesn’t influence the phytoplankton directly, but we found it is a useful indicator of the changing environmental conditions that boost phytoplankton growth. It also has the potential to be a good indicator of other ecological changes in the region, and we found that the frequency of these important low salinity events has increased significantly (by 12.5 days per decade) in recent years. 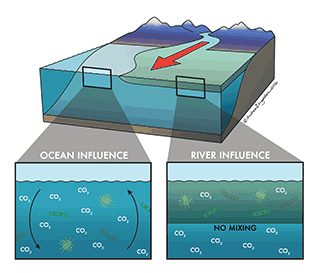 Fortunately for me, many other people at FHL were thinking about salinity as well. This work catalyzed conversations with Dr. Sophie George and Dr. Emily Carrington’s group about the potential influences of salinity changes on the benthic organisms living in the San Juan Islands. Aaron and I observed greater food availability and quality in lower salinity waters, but this environmental change results in direct physiological stress on many benthic animals, including osmotic and, potentially, pH stress. A conversation with Molly Roberts, then a technician for Dr. Carrington and the Ocean Acidification Environmental Laboratory (now a PhD student at UW), led us to explore observations of seawater pH in relation to salinity. The San Juans had recently been described as a naturally low pH environment3, where the average pH can be as low as 7.7. These conditions regularly occur in estuaries, owing to a combination of the breakdown of organic matter (respiration adds CO2 to the water, driving down pH) and freshwater input (that reduces the buffering capacity of seawater, driving down pH), but the observation of such low pH in a predominantly marine ecosystem was surprising. Ocean acidification, or the change of seawater chemistry resulting from absorption of anthropogenic CO2 from the atmosphere, shouldn’t drive pH that low in the ocean for more than a century (based on current Intergovernmental Panel on Climate Change predictions). When Molly and I started looking at the patterns of pH change, we were very surprised to find that 1) pH was extremely variable and 2) the only time a pH of 8.0 or higher (near the open ocean average) was observed was at lower salinities (Fig. 5)! Something weird was going on. 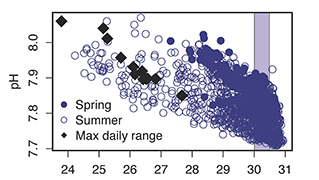 The paper detailing these observations is available open access through Limnology and Oceanography1. This novel perspective on the interplay between pelagic particulate organic matter dynamics and the physical environment is a direct product of the collaborative culture at FHL, and could not have been accomplished without the continued support of FHL throughout every stage of research. These observations mirrored the collaborations of researchers at FHL by highlighting the connectivity of elements of the San Juan Island ecosystem. The amount of rain, snow and sun as far away as the Canadian Rockies impacts the amount of freshwater coming from the Fraser River. This river water then alters the food and physical environment of the San Juans as it's mixed into the ocean water by the tides. The change in salinity provides us with an indicator of this ecosystem connectivity over time, and a way to understand how long-term changes might influence this diverse ecosystem. During my PhD, I will continue studying the interplay between primary productivity and pH dynamics in Washington’s coastal waters, and how these dynamics influence benthic suspension feeders. Specifically, I study our tastiest bivalves, the Pacific and Olympia oysters.

Alex Lowe is a PhD candidate in the Biology Department at the University of Washington attempting to integrate oceanography and marine community ecology. His #lifegoals of being on a boat everyday have led to a range of studies on coastal marine and freshwater ecosystems. He uses natural environmental gradients and manipulations to study the the influence of environmental variability on species interactions. His current work investigates the influence of eelgrass on native Olympia and commercial Pacific oysters across a range of environmental conditions. You can read more about him at www.alexander-lowe.com/.