“Sylvia, I think we caught one!” Craig Staude shouted excitedly as he and his team of volunteers opened a baited trap in a tidal channel near the sculpture park at Roche Harbor on August 30th. Sure enough, the 74-millimeter-wide male was the first live European green crab ever caught in Washington's Salish Sea! Why is the discovery of this green crab specimen such an important find? 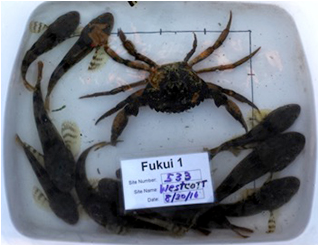 A green crab and numerous staghorn sculpins from the catch of a Fukui-type trap. Photo credit: C. Staude.

The European green crab (Carcinus maenas) has invaded temperate marine communities around the world since the time of sailing ships. When abundant, green crabs are voracious predators on native species including clams, oysters, and crabs. They are also ecological engineers, causing damage to valuable eelgrass beds by ripping up the plants in search of food. The potential for such damage is precisely why the discovery of green crabs in the Salish Sea is of such concern to biologists and aquaculturists on both sides of the border. 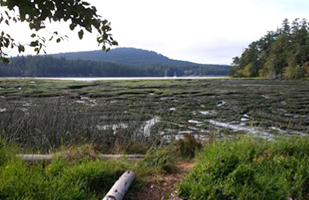 Green crabs first arrived on the U.S. west coast in San Francisco Bay in the 1980s, as transplants from the east coast. Most likely, they hitchhiked in the algal packing material used to keep lobsters and baitworms moist during transit from Maine. Subsequent range expansion to the coastal estuaries of Oregon and Washington and the west coast of Vancouver Island can be traced in the northward transport of larvae by prevailing ocean currents during the strong 1997/1998 winter El Niño event. Since then, scientists have feared that green crabs would eventually enter the Salish Sea. Once a population is established in these protected waters, green crabs would thrive on abundant prey and their larvae would establish satellite populations throughout our inland sea. For the past 19 years, no green crabs had been discovered here despite various sampling programs by Department of Fisheries and Oceans Canada, Washington Sea Grant, and other agencies. 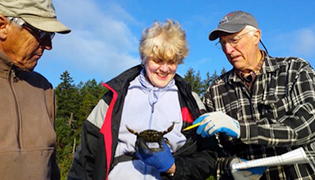 Dr. Sylvia Yamada, a research associate at Oregon State University and frequent visiting scientist at FHL, has spent many years studying the biology of Pacific coast crabs and has spearheaded green crab monitoring in Oregon. Sylvia happened to join Craig and Jack’s team on the eventful day this August. 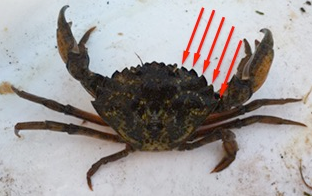 Craig: "Our team members at first were a little hesitant. We had seen several photos of this notorious crab, but had never seen a live one. We were glad that Sylvia was nearby to confirm our identification. Her enthusiasm was apparent, and she joked 'You guys are famous!'"

Why were no green crabs detected in the U.S. Salish Sea for 19 years, when there have been source populations in Oregon and Washington coastal estuaries and some inlets of Vancouver Island? Why now? The Strait of Juan de Fuca acts as a semi-permeable barrier that helps prevent green crab larvae from entering the central Salish Sea. Two factors work against the larvae: currents and temperature. The surface currents in the Strait, driven by the discharge of fresh water from the Fraser and Skagit rivers, flow out of the Strait most of the time. Likewise, the surface water of the Strait is typically colder than 10°C; too cold for green crab larvae to develop. However, there can be reversals in the surface current, especially during major storms, and temperatures can be unusually warm, as during the recent El Niño. The size of this specimen, 74 mm in carapace width, suggests that it most likely settled during the winter or spring of 2015. Storms during winter and early spring, combined with anomalously warm water, could have provided a window of favorability for larval transport to inland waters. 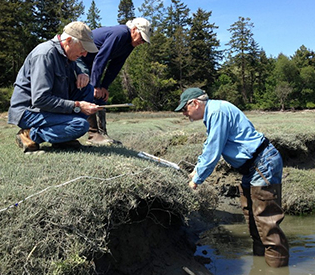 Following the discovery of the first green crab, biologists from Washington Sea Grant and Washington Department of Fish and Wildlife came to San Juan Island to conduct intensive trapping. Yet, not a single green crab was found in nearly 200 trap sets in and around Westcott Bay. One partial molt was found, which likely came from a second individual. This suggests that green crabs are still extremely rare in the Salish Sea and may not yet constitute a breeding population. As El Niño conditions dissipate, we might get a temporary reprieve from further green crab range expansion.

Craig and Jack’s team are making one last trapping survey at the end of September. Monthly surveys will start again next spring, when it is hoped that additional sites can be added. More volunteers are needed, both here and around Puget Sound. If you are interested, contact Craig (staude@uw.edu) or Emily Grason (crabteam@uw.edu). 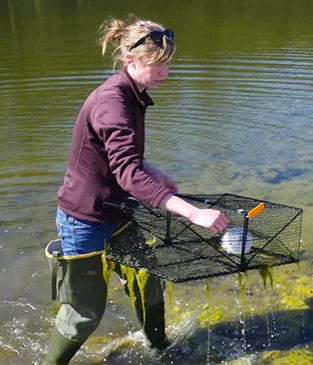 Will green crabs eventually spread throughout our inland sea? Time will tell. We need “eyes on the beach and boots in the mud” for early detection.*

To learn more about this invader and how to identify it, visit the Washington Sea Grant Crab Team website: https://wsg.washington.edu/crabteam.

If you should find a green crab, it must be released alive. This may sound counterintuitive, but in order to prevent unwanted transferring around the state it is illegal to catch a green crab without a permit.

Then, as soon as possible, send several photos and the detailed location information or geographic coordinates to crabteam@uw.edu. The Rapid Response Crab Team will come to the site of any confirmed sighting and do their trapping. 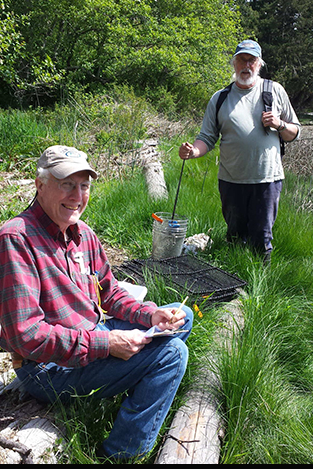 *As Tide BItes went to press, additional green crabs have been discovered at the Padilla Bay National Estuarine Research Reserve.