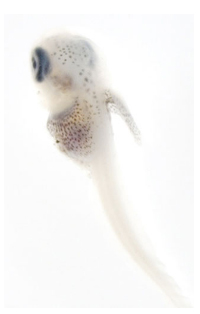 Marine fishes usually start life with a larval phase, during which they are known as ichthyoplankton. Tiny and typically transparent, these animals experience an alien world and often bear little resemblance to their parents (Figure 1).

With survival rates around 1%, being a larval fish is anything but easy. Born without skeletons, they are poor swimmers and worse hunters. Drifting in open water, unable to swim against tides and currents, their fates are often dictated by luck. The standard fishy solution to the survival problem is to lay huge numbers of eggs (tens of thousands to tens of millions), increasing the odds that a handful of offspring will pass through the larval phase. Those that survive become juvenile fishes, capable of powerful swimming and effective feeding. They exit open water, moving to their adult habitat. For most fishes this transition is rapid, the larval stage lasting only a few weeks. Our study focused on development in two species of sculpin, linking morphological changes with behavioral shifts.

Our study organisms (Figure 2), the Soft Sculpin (Psychrolutes sigalutes) and the Tadpole Sculpin (Psychrolutes paradoxus), are closely related and both species are found in the water column in springtime. They each have maximum adult lengths of approximately 80 mm. As larvae, they are indistinguishable without a microscope. Both species lay abnormally few eggs, perhaps 120 at a time. Like most sculpins, adults live as bottom-dwelling ambush predators. The ends of their larval phases are typically marked by settlement on the seabed. Psychrolutes paradoxus follows this model, settling within a month of hatching, at a size of approximately 20 mm. Psychrolutes sigalutes, however, follows a different path. This Soft Sculpin remains in the plankton, growing far larger (~40 mm) than cohabitant species. Descending out of sight during the day, P. sigalutes swims to the surface at night to feed, often for three months or more. This struck us as bizarre, as the Soft Sculpin is terribly suited to life in open water. They are painfully slow-swimming fish with blobs for bodies, sinking the moment they stop beating their tails. It would surely be easier to remain on the bottom. Why, then, does this little fish persevere as a clumsy, awkward holdout, while its well-adjusted cousin (P. paradoxus) settles into a normal fish lifestyle? We turned to morphology for clues to their biological priorities. 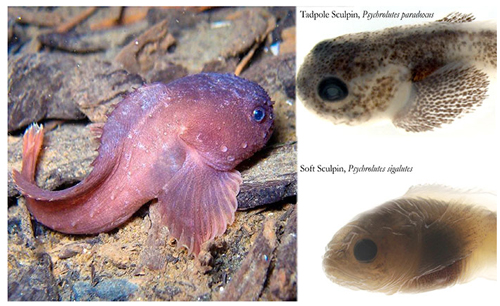 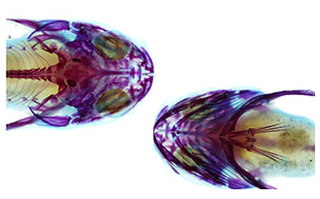 Skeletal development is likely the most critical process in the life of a larval fish. With bones come a stiffer, hydrodynamic body, strong jaws for feeding, and hardened protective bits that make them more difficult meals for predators. The advantages conferred by a skeleton dramatically increase the odds of surviving the larval phase. To track bone development in our sculpins, we used a technique known as clearing and staining. With a combination of chemicals we dissolved away the tissues of preserved specimens, leaving behind only collagen (a connective tissue), cartilage, and skeleton. We then applied two dyes to our specimens, turning bones red and cartilage blue. The end product is an intact, cleared animal with a highly visible, articulated skeleton with fine details readily observable (Figure 3). We prepared 110 individuals, 72 of which (42 P. sigalutes, 30 P. paradoxus) were used to build a developmental timeline that showcases the transition from larva to adult in each species (Figure 4). With our growth series constructed, we could track the development of specific bones within our fishes. We divided up bits of the skeleton based on its purpose for the fish: specifically, we categorized structures as being related to feeding, swimming, or structure/protection. From the order and rates of development in bones, we inferred the relative importance of various functions to the fish through early life. 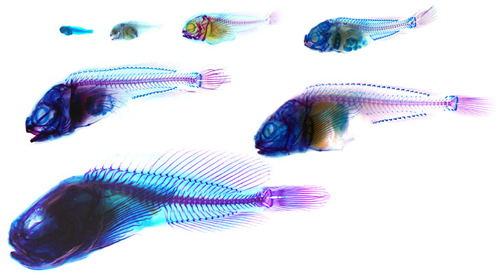 Fig. 4: A handful of specimens from the development series of P. sigalutes, ranging from 6.0 mm to 54 mm.

Our results showed a singular, overwhelming priority amongst our youngest, smallest animals: dinner! Mouth parts were the first visible bones on all of our larvae. This isn’t surprising; growth cannot happen unless the fishes get a meal. Locomotion structures were next to see significant development, followed by the structural/protective components. Though the broad goals of both species were similar, they unfolded on hugely different timescales and at very different sizes. While P. paradoxus has a complete skeleton at 20 mm, a size which it can achieve within a few weeks, P. sigalutes retains an incomplete skeleton for far longer (Figure 5). We did not observe a totally complete skeleton in the Soft Sculpin until it had reached 47 mm — the cusp of adulthood and more than twice the size of a similarly-developed Tadpole Sculpin. Moreover, structures useful to bottom-dwelling fish which harden quickly in P. paradoxus remained incomplete in the Soft Sculpin for much of early life. Bone development in the Soft Sculpin follows a meandering path, consistent with its lengthy stay in open water. The drawn-out articulation processes of basic structures like the backbone are likely culprits for their poor swimming abilities. 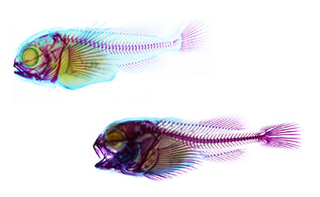 Fig. 5: The relative skeletal development of a 14.0 mm P. sigalutes (top) and a 16.0 mm P. paradoxus (bottom). Note the disarticulated backbone and relative lack of mineralization (marked by red dye) in P. sigalutes.

With a half-mineralized, disarticulated skeleton, the Soft Sculpin is little more than a clumsy, squishy bubble with fins, every bit as laughably out-of-place in open water as appearances suggest. However, despite their disadvantages, they are bafflingly successful. Juvenile P. sigalutes are ubiquitous in the spring plankton, and the specimens we collected had near-universally full stomachs. How does this little fish do it? The answer likely lies in rearranged biological priorities. 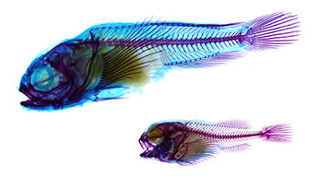 We believe the Soft Sculpin “cheats” the normal course of early life, getting as large as possible as quickly as possible. Its underdeveloped bones are an indicator of this shift. Operating with an energetically cut-rate skeleton capable of only bare necessities, P. sigalutes frees up the resources to grow larger than every other predator in the plankton (Figure 6). This confers massive advantages — figuratively and literally. Tiny creatures (such as fish larvae) lack the inertia to glide through the water, making swimming difficult. Larger animals glide through the water better by virtue of their bulk, irrespective of poor propulsion techniques and hydrodynamic profiles. While the Soft Sculpin is slow and awkward relative to similarly-sized fishes, there are no such contenders in its juvenile stomping grounds. Eschewing the pressures of adult life, P. sigalutes lives as an unstoppable giant amongst struggling zooplankton and fish larvae. Bigger, faster, and hungrier than its pelagic compatriots, the Soft Sculpin bumbles about with impunity, devouring everything in sight. Growth and development are not rigid processes. Even closely-related species can have wildly different paths to adulthood. The story of the Soft Sculpin is an example of developmental plasticity granting an exciting role to an unexpected creature.

Daniel recently finished his undergraduate studies at the University of Washington’s School of Aquatic & Fishery Sciences. He attended Autumn quarter 2014 at FHL, and continued his research there through 2015. He visits the Labs regularly, most recently this August for the scientific diver training program. Though engrossed by all marine life, he is most commonly found in Lab 8, pursuing knowledge of all things fishy.