When you are trying to find your way home from a new place, you probably reach for your phone or GPS to ask for directions. Other animals don’t have the option of technology, but they do manage some extraordinary navigation. Birds, sea turtles, termites, and many other animals have a magnetic "sixth sense" that allows them to detect the Earth’s magnetic field, and align their direction on a migration path. This ability to sense magnetic fields, or having an "internal compass," is termed magnetoreception. 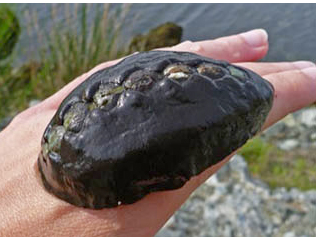 Pioneering work on animal magnetoreception was done at Friday Harbor Labs starting in the 1980s using the seaslug Tochuina tetraquetra (formerly called Tritonia diomedea). Special equipment at FHL called a Merritt coil can manipulate electric currents to determine the force and direction of the magnetic field inside a cube that measures 6 ft on each side. This way, we can change which direction is "north" inside the experimental cube. Two members of our team, Drs Shaun Cain and Jim Murray, use this equipment for their research and for teaching a summer Neuroethology course (which will be offered again in summer 2017). In these experiments, we aimed to test for a magnetic sense in other, more primitive molluscs. 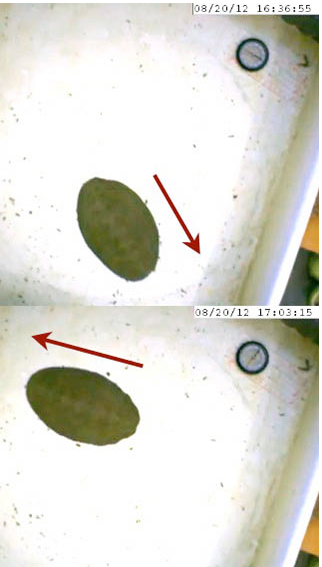 Chitons are familiar animals on rocky shores, with eight overlapping shell plates. They are often called “living fossils” due to their close resemblance to ancestors from 300 million years ago. But these animals have some astonishing abilities: all chitons grow a tooth ribbon, or radula, reinforced with iron magnetite and hardened to efficiently scrape food off rocks. Magnetite is an iron oxide mineral that is naturally attracted to magnets. The magnetite in chiton teeth led scientists to speculate that these animals may be able to sense magnetic fields. This idea had become a sort of intertidal urban legend that fascinated scientists young and old. Students at FHL and other labs on the west coast have devised experiments to test this ability, including two of my students in the FHL summer invertebrates course. One published paper even suggested that a chiton on a floating piece of wood would spin to face north! (We did try this, it doesn’t work.) But this speculation had never been tested in a rigorous way.

We set out to complete a thorough experimental series, being careful to use techniques that would minimize bias (assumptions) about whether chitons could sense magnetic fields or not. We used four separate species of chitons to test their potential sensitivity to magnetism. Chitons prefer to use environmental cues for orientation, including water flow and surface features like cracks and edges. We discovered that without those waymarks, in normal magnetic conditions most chitons started moving toward Northwest. We exposed another set of animals from all four species to a changed magnetic field, so that North appeared to be rotated clockwise (natural magnetic East). In those groups, the chitons travelled in random directions with no apparent preference. This random behavior is strong evidence that the chitons were using the ambient magnetic field to chart their course, but became confused when it suddenly changed. Why didn’t they just change course by 90° to accommodate the new "north" in their experimental conditions? Try putting yourself in the mind of a chiton. If gravity suddenly stopped coming out of the ground, and came out of a wall instead, we would be justified in feeling a bit disoriented, at least for a little while. 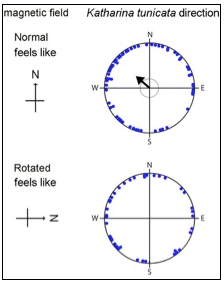 Orientation of chitons in normal (top) and experimental (bottom) magnetic fields, in one of four experimental chiton species. Blue dots show the orientation of individual chitons (with the natural, unaltered compass directions shown on the plot). The inner circle indicates a statistically significant threshold for clustering, with the arrow indicating the mean direction toward northwest. Under an artificially rotated magnetic field, animals went in all directions with no preference.

Many aspects of magnetoreception still remain elusive — how many animals have this sense, and can it possibly be a subconscious ability even in humans? The idea that some people, and animals just “know” which way is north has fascinated people for generations. The source of this sense still remains elusive and controversial in neurobiology. Proteins called cryptochromes, or magnetite particles in special receptor cells, are two possible mechanisms. With this new evidence of magnetic navigation, chitons provide a new "model organism" that we can use to study this phenomenon in more detail. In fact, the iron teeth of chitons are unlikely to have any direct function in their magnetic sense — if you swallowed a magnet, or had iron fillings in your teeth, you still probably wouldn’t be able to give up your GPS for good.

Time-lapse video of chitons can be viewed here (Katharina tunicata) exploring their individual dishes in the FHL Merritt coil.

The study described here was published as: Sumner-Rooney L.H., Murray J.A., Cain S.D., and J.D. Sigwart. 2014. Do chitons have a compass? Evidence for magnetic sensitivity in Polyplacophora. Journal of Natural History: 48, 3033–3045.

Apply now to study neuroethology at FHL next summer and find out more! depts.washington.edu/fhl/studentSummer2017.html

Dr. Julia Sigwart is an Associate Professor and the Associate Director of the Queen's University Marine Laboratory in Northern Ireland. She is currently back home on the west coast on an extended research sabbatical at University of California, Berkeley, funded by the European Commission. Her research on the evolution of chitons and other marine creatures covers many different aspects, from fossils to neurobiology, which provides a good reason to do all sorts of fun experiments all over the world.