When you have a question about something you see in nature, a research scientist provides you with an answer in words. My explanation, on the other hand, comes in the form of an image. My name is Andrea Dingeldein, and when people ask me what I do for a living, I respond, “I’m a science illustrator.” That usually elicits a rather confused look and the question, “Well, what is that?” My simple response is: “It’s a visual explanation of science.” Science illustration communicates scientific research to broader audiences, which in turn boosts scientific literacy and thus improves the effectiveness of conservation efforts around the world. 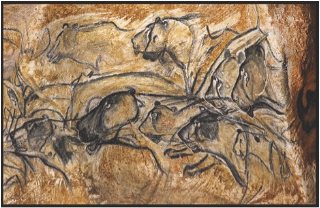 Most people think that science illustration is a relatively modern concept, and in some ways, it is. With modern advancements in science, technology, and engineering, the demand for and value of science illustration has increased exponentially. However, in its most primitive form, science illustration has been around since humans first attempted to understand and record the world around them. For example, 32,000-year-old cave paintings in France (the oldest art form in existence, Figure 1) depict prehistoric animals that lived alongside early humans. These illustrations were detailed enough that modern scientists were able to match them to fossil records of extinct prehistoric animals that once roamed the area.

In more recent history, scientific illustrators have included Leonardo da Vinci (15th century), who made some of the first detailed sketches of human anatomy; Sydney Parkinson (18th century), a botanical illustrator who accompanied James Cook on his famous first voyage to the Pacific; and John James Audubon (19th century), who is most famous for his accurate illustrations of North American birds (Figure 2). Many people recognize these historical figures as fine artists, but they were science illustrators as well: they employed careful observation and detailed recording as methods to answer questions about the natural world, just as modern science illustrators do.

In modern times, one of the main functions of science illustrations is to disseminate research among scientists. For example: a conceptual illustration can summarize research in one image, a glow-through can reveal hidden structures and show external anatomy simultaneously, and detailed pen-and-ink illustrations can highlight or clarify specific structures. But even general members of the public encounter and utilize science illustrations almost every day. These may be in the form of illustrated field guides, or interpretive panels at parks, historic sites, zoos, aquariums, and museums. Even if you don’t have a strong interest in nature, you’ve encountered science illustrations at the doctor’s office (as posters or pamphlets showing human anatomy or procedures) and in popular magazines (like Scientific American or National Geographic).

You may be wondering how someone like me finds herself in the position to pursue a career in science illustration. I can tell you there is no one clear-cut path. All science illustrators have their own unique stories of how they arrived at this dual-disciplined field, but we also have one thing in common. We all share a love and appreciation for nature and a passion for capturing and sharing that with other people. I always found myself torn between art and science: I double-majored in studio art and marine biology at the University of North Carolina-Wilmington for my undergraduate degree, and then went on to obtain my M.S. in marine biology. During my master’s, I discovered that I was more skilled at creating illustrations to communicate my research than I was at carrying out data collection and interpretation. Therefore, following my master’s, I found my way into the Science Illustration Graduate Certificate Program at California State University, Monterey Bay. The program’s curriculum places emphasis on creating illustrations that are scientifically accurate and also organized in a way that makes the information contained within them highly accessible to the public. After completing nine months of coursework, students are required to pursue a ten-week internship in the field of science illustration. Having previously attended classes at Friday Harbor Laboratories as an undergraduate, I was aware of FHL’s tradition of using of art in the classroom as a tool to teach science (a method that has unfortunately been forgotten at many scientific research institutions). Because of this strong connection between art and science at the Labs, I was convinced that FHL would be the perfect host institution for a science illustration internship.

This summer, I arrived at FHL with two main goals that I hoped to achieve during my internship: 1) to network with the community of residential and visiting scientists that flock to the Labs during the summer and produce illustrations that highlighted research being conducted there, and 2) to create interpretive panels that would help educate the public that visited FHL for years to come. Both of these goals aimed to bring awareness to the field of science illustration while also serving the community of scientists and public that utilize this wonderful institution. 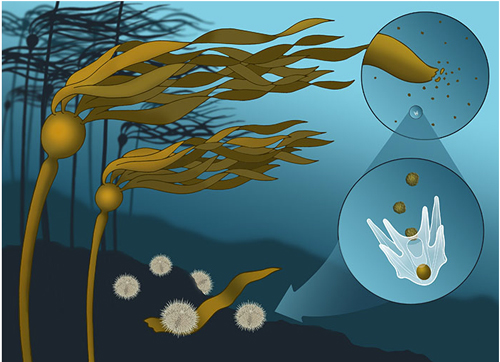 Fig. 3: A conceptual illustration depicting an underwater forest of bull kelp (Nereocystis lutkeana) swaying in the waves. The wave action causes clumps of detrital cells to slough off at the distal end of the kelp blade. These nutritious detrital cells are then consumed by larval sea urchins that grow and develop into adult urchins. The adult urchins are voracious predators of bull kelp. If too many adults settle to an area, they can have overwhelming negative effects on the stability of the kelp forest and can ultimately create an area devoid of kelp (called an “urchin barren”). Created with Adobe Photoshop and Illustrator, ©Andrea Dingeldein, 2016.

My first summer project was a conceptual illustration of recent research by FHL’s postdoctoral fellow, Dr. Colette Feehan, and her coauthors, Beatrice Grauman-Boss, Dr. Megan Dethier, Dr. Richard Strathmann, and Dr. David Duggins. Their research revealed that detrital cells from bull kelp (Nereocystis luetkeana) can be consumed by larval sea urchins. I worked closely with Dr. Feehan to summarize the group’s research findings in one clear and concise image that showed the life cycle of sea urchins and how they can influence the dynamics of a kelp forest ecosystem (Figure 3). My second project was focused on enhancing the public’s experience at the Labs. When members of the public visit FHL, many filter through the main building (Fernald Lab) which houses the library, administrative offices, and a few research labs. On the lower level, there is a flow-through seawater tank stocked with some of the most common species of subtidal invertebrates in the San Juan Island archipelago. When I arrived, there was no identification information for the animals in the tank, so I created thirteen illustrated panels with “fun facts” beneath each species (Figure 4). Next time you are visiting the Labs, stop by the first floor of Fernald Lab and try identifying some of the local marine inhabitants! 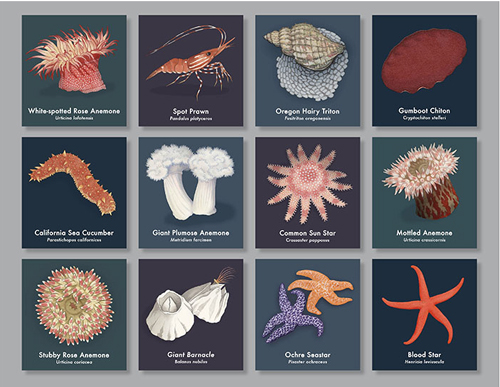 My second visit to FHL was just as memorable as the first, and it instilled in me a desire to continue to work closely with research scientists throughout my career as a science illustrator. Hopefully after reading this edition of Tide Bites, you have a better understanding of science illustration, its history as an art-form and tool for exploration, and how it can be used to effectively communicate science and enhance public appreciation for the natural world. I would like to thank FHL for hosting me this summer, as well all of the researchers, students, and staff that stopped by my studio to chat and follow my progress. To keep up with my current projects, visit my website at www.thelocalnaturalist.com, or follow me on Facebook (The Local Naturalist and Instagram (@adingeldein).

Fig. 5: An excerpt from my field sketching journal: False Bay during a field trip with the FHL Invertebrate Zoology class. Graphite and watercolor, ©Andrea Dingeldein, 2016.

Andrea Dingeldein visited Friday Harbor Labs this summer as a graduate research fellow in science illustration. She teaches part-time at the Science Illustration Certificate Program at California State University, Monterey Bay and also freelances from her home studio in Pacific Grove, California. To view Andrea’s online portfolio, please visit her website at www.thelocalnaturalist.com. If you are interested in commissioning an illustration, contact her at thelocalnaturalist@gmail.com.