Recently, FHL became home to the Karel F. Liem Bio-Imaging Center. The centerpiece of the shared research facility is a very capable micro-source CT scanner from Bruker, a model 1173. The scanner can image radio-dense tissue at resolution as fine as 5 microns, and because of variable magnification geometry it can also image specimens about the size of two grapefruits. Having the machine right down the hall from my office led to experimentation with high-speed workflow. And that led to a project called #scanAllFish. 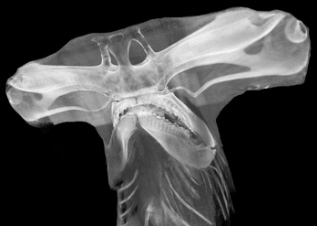 CT scan of a Great Hammerhead shark (Sphyrna mokarran) head. Note how differently this cartilaginous fish's skeleton appears compared to the bony fish at the bottom of this Tide Bite.

Born from a series of tweets from @fishguy_FHL, the idea is to CT-scan every species of fish and put all the data up on the web for everyone to access free of charge. We aim to democratize CT data and ensure that in this corner of vertebrate comparative morphology, access to a scanner is not a competitive advantage. The Foundations who donated the bulk of the money to buy the machine asked that it be available to anyone who is visiting FHL, free of charge. This generosity enables the #scanAllFish project.

Our strategy is to offer scan time to scientists who have a large diversity of species they want scanned. They bring lots of specimens and a small team to the Labs and spend an intensive few days or weeks scanning everything they are interested in. People have come from around the country to take advantage of the offer, and in the process we have scanned over 1,200 species of fishes. You can read more about the project by searching the web for #scanAllFish — it has made a small media splash. If you'd like to help support Adam's goal of scanning all fish, you can donate to the Karel F Liem Fish Biology Endowment which supports the Karel F. Liem Bio-Imaging Facility at FHL.

In their own words, here are two recent projects that fall under the #scanAllFish umbrella. The first is by Kory Evans-Jackson, who is about to get his Ph.D. at Louisiana State University working on weakly electric fish from the Amazon basin. The second is by Malorie Hayes, a Ph.D. candidate at Auburn University studying an amazing adaptive radiation in barbs, an old world group of freshwater fishes. 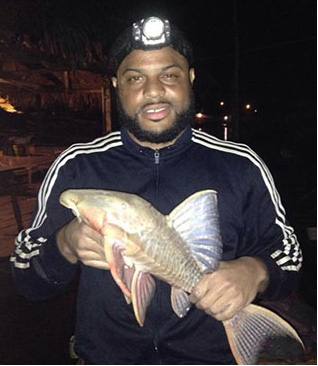 Myself along with two of my lab mates, Kassandra Ford and Maxwell Bernt, CT-scanned 238 specimens (75 species) of South American electric fishes on the CT scanner at FHL. We did so in order to collect three-dimensional data on the skulls of these species for use in geometric morphometrics and finite element analyses. In particular, we used these data to quantify and study the developmental shape change between sexually-dimorphic males and females in one species of a Panamanian electric fish (Apteronotus rostratus). These data will help elucidate evolutionary and developmental processes that structure the diversity of biological forms observed today. — Kory Evans-Jackson

Taxonomy is the study of naming and describing the biodiversity seen in the world, and with biodiversity rapidly declining, taxonomists have lots of work to do and little time to do it. In the case of African barbs, the workload appears almost insurmountable, with estimates ranging from 250-600 member species. Authors have been decrying the uninformative taxonomy of the group since the 1960s. Progress within this group has been piecemeal at best, with the largest leap forward coming in the last two years with the recognition of Labeobarbus (Vreven et al., 2016) and the designation of Enteromius (Yang et al., 2015). The latter designation has been controversial, with low taxon sampling, poorly supported clades, and no evidence of synapomorphies within the group.

Long recognized as multiple undescribed genera, the barbs have been problematic because external morphological characteristics (e.g. coloration patterns, size and number of barbels, spines in the dorsal fin) are often convergent. Additionally, many of the taxa have been compared across polyphyletic genera, leading to confusion regarding potential synapomorphies. The problem of convergent morphology is compounded with lack of genetic data because specimens both morphological and genetic are very rare. Specimens of many described species were collected and described before the advent of genetic preservation methods, and obtaining newer specimens specifically for genetic study is difficult because of inaccessibility to streams in certain regions due to lack of infrastructure or political turmoil.

Because the morphological specimens are rare, any damage done to these samples must be carefully considered. Rather than dissecting or chemically treating the specimens in order to see the bones, CT scanning allows for a 3D visualization of the skeletal system with no damage to the original specimen. This means scales, pigmentation, and musculature remain intact while allowing the researcher to visualize the skeletal structure. This method can lead to genus or species-level diagnostic characters in bones. Using the CT scanning technology available at FHL, a new means to examine rare and understudied specimens is available and will greatly aid in the description of the multiple genera present in African barbs. — Malorie Hayes