Native red rock crabs (Cancer productus) are important predators on protected rocky nearshore communities from Alaska to Baja California. While they are harvested recreationally, they have not been as well studied as their commercially-valuable cousin, the Dungeness crab. Red rock crabs are abundant on semi-protected rock and boulder beaches where the substrate is composed of sand and shell gravel and where the salinity remains high. They have voracious appetites, feeding on a wide variety of species including barnacles, mussels, clams, oysters, snails, worms and sea cucumbers. Adults are highly mobile and are known to move into the high intertidal during flood tides to forage. We decided to piece together the life cycle of the red rock crab by compiling what was learned through various studies carried out on different life stages at Friday Harbor Laboratories. 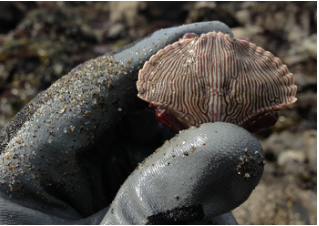 Fig 1: A juvenile red rock crab held between a gloved index finger and thumb. Note the sand grains on the glove; substrate under the rocks where juveniles shelter is sandy. Photo credit: S. Groth.

During the 1980s, Megumi Strathmann collected observations made by other researchers on the red rock crab's early life history. Mating, associated with female molting, occurs from May to August. Females migrate to deeper waters in the Fall and release their eggs from October to January, carrying them on the female's swimmerets until they hatch between late March and early April. Larvae are most densely found in May and settle into intertidal and nearshore nursery habitats from early July to early August and metamorphose into young crabs. José Orensanz and Vincent Gallucci, with the help of Krispi Staude, estimated the growth of newly settled crabs both in the field and in the lab. Krispi spent many hours rearing and feeding early crab stages and recording their molting events in Lab 6 (now Lab 11). They learned that young crabs can attain a carapace width (CW) of around 10 mm by the end of their first summer, and that sexual maturity occurs around 65 mm CW. 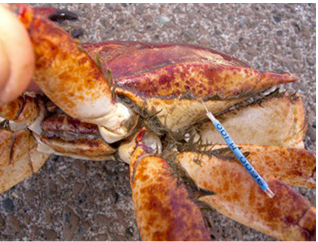 Fig. 2: A tagged red rock crab, showing the insertion of a spaghetti tag anchored into the posterior gill chamber on the suture line between the upper and lower carapace. Photo credit: S. Groth.

During the 1990s, Sylvia Yamada recruited Labs kids and interns to look for young rock crabs sheltering under boulders and rocks in their intertidal nursery habitats (Figure 1). We measured the carapace width of all the crabs and created size-frequency distributions. By following the shifts in size peaks over time, we were able to estimate the growth rate of cohorts. To confirm our estimates, we also reared individual young crabs in minnow trap-cages and suspended them off the FHL docks. We learned that young males and females grow at the same rate, and attain 30-65 mm CW at age 1. 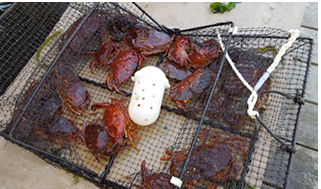 Fig. 3: Adult crabs that were trapped under the FHL docks for the mark-recapture study. Photo credit: S. Yamada.

In 2012, Scott Groth and Sylvia Yamada initiated a mark-recapture study to measure the growth of adult crabs and to estimate their longevity. We tagged 2000+ individual crabs by inserting spaghetti tags into their gill chamber, right on the suture line between the upper and lower carapace (Figure 2). This suture line is the first one to open up during the molting process and thus allows the tag to be retained during growth. We continued this study for 4 years by trapping and tagging crabs both on the beach and off the docks in front of FHL's main lab (Figure 3). We learned that crabs attain 55-95 mm CW at age 2 and that larger females grow significantly less than males, as measured both by molt increment and molt frequency. The largest male and female in our study were 171 and 150 mm carapace width respectively. We estimate that longevity is to 5-6 years, much longer than previously described.

Our study fills a gap in our understanding of the life history of the red rock crab. Knowing that these crabs take at least 3 years to reach a harvestable size (>120 mm) and live 5 years or more will help fisheries managers set sustainable harvest regulations for this species.

Sylvia Yamada is a marine biologist in the Department of Integrative Biology at Oregon State University and a frequent visiting scientist at FHL. Her interests include the ecology of marine invertebrates and the link between oceanographic factors and the recruitment and range expansion of the European green crab in the Pacific Northwest.

Scott Groth works as a shellfish biologist managing Oregon’s shrimp, sea urchin and abalone fisheries for the Oregon Department of Fish and Wildlife. In addition to fishery management, Scott has a passion for the marine invertebrates of the Pacific Northwest; visiting them during SCUBA dives, catching them in photographs and gaining understanding of their life histories through scientific method.

This project was published in the December 2016 issue of the Journal for Shellfish Research. We would like to thank its editor, who was enthusiastic in giving permission to share our findings in this Tide Bite.