Fidalgo Bay is a shallow emBayment in northwestern Skagit County, Washington. Spanning roughly 1,600 acres (6.4 km2) of sand and gravel beaches, mudflats and marshes, it is bordered by the infrastructures of the city of Anacortes, private residences, oil refineries, and a tribally owned RV park

(Figure 1). The Bay has a long history of degradation initiated by European settlers logging in the 1850s; continuing with the lumber and mill industries beginning in the 1890s which operated along the waterfront, contributing to a robust economy but compromising the health of the Bay. Decades of wood waste accumulation on benthic sediments created an anoxic environment high in hydrogen sulfide, exacerbated by four major oil spills between 1991 and 1992 (Washington Department of Fish and Wildlife, WDFW).

Despite these stressors, the Bay supports an array of flora and fauna including economically valuable forage and game fish, an abundance of seaweeds, and, in deeper water, the native seagrass Zostera marina (Figure 2). The Bay also provides a respite for migratory waterfowl, and serves as a nursery for invertebrates and shellfish. Its coastline has been deemed important for marine species, including some listed as endangered (DOE, U.S. Fish and Wildlife Service). While its ecological importance has been officially acknowledged, the Bay remains threatened by development. 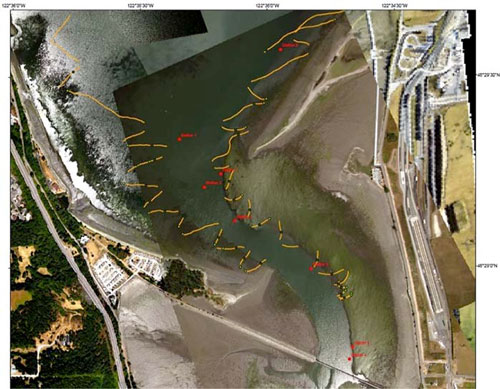 During the summer of 2015, a team from the Friday Harbor Laboratories and the Samish Indian Nation collaborated to prepare a baseline map of the benthic habitats in Fidalgo Bay. An important objective of this collaboration was to delineate the total acreage and deep-water edge of Zostera marina (seagrass) beds in the Bay. Presence of this meadow-forming native seagrass indicates ecosystem health, and the meadows that persist provide vital ecological services in maintaining the overall well-being of the Bay and its inhabitants.

To develop a baseline map of seagrass distribution and characterize benthic habitat, researchers took true color aerial photographs at low tide and spliced them together to form a mosaic of the Bay. From this assemblage, macroalgae and Z. marina beds were outlined and differentiated based on color: light green indicated algae, dark green indicated seagrass. Echo-sounder transects were conducted to verify the deep-water edge of beds, and sediment samples were collected with a Ponar grab. Sediments were dried and sieved to determine the various proportions of silt, sand, and rock in different regions of the Bay. Figure 2 integrates information from seafloor geology data and aerial footage.

Benthic habitats were characterized using a standardized key developed by Greene et al., 1999, 2007 and include five categories; megahabitat (depth and general characteristics over many kilometers), seafloor induration (substrate hardness), meso/macrohabitat (seafloor features at the scale of one to 1000 meters), and then a modifier describing texture, biology, or bedforms. Using this technique, Fidalgo Bay benthic landscapes can be subdivided into 13 potential habitat types (Figure 3), two of which contain patches of Z. marina. 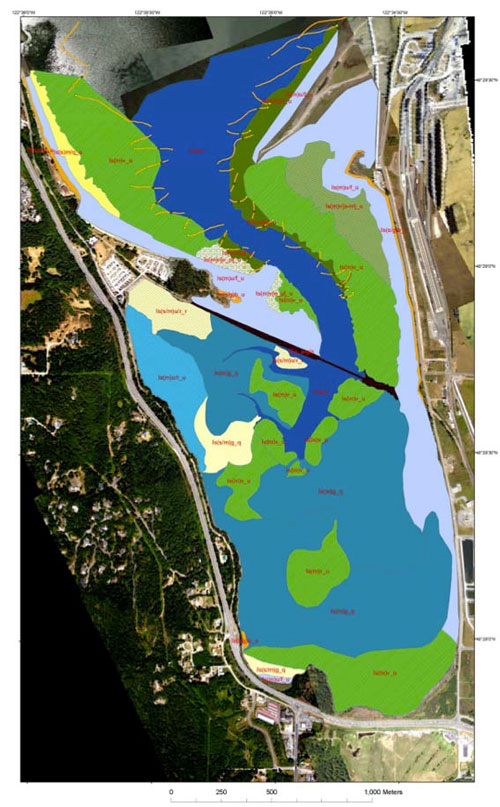 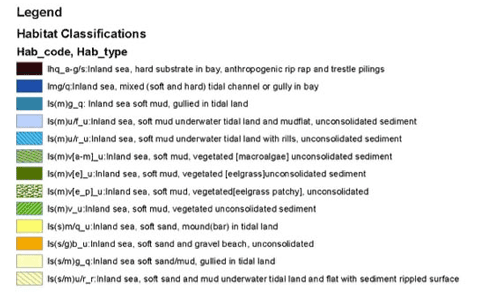 Baseline habitat maps are important resources for managing and protecting benthic environments and their associated ecology. The resulting map provides an accurate representation of the type and number of various habitats present in Fidalgo Bay, a means for tracking fluctuation in Z. marina abundance over time, and may guide future damage assessments and inform restoration efforts.

Washington Department of Fish and Wildlife. 2004. Restoration Plan and Environmental Assessment for the Texaco Oil Spills into Fidalgo Bay, Anacortes, WA in 1991 and 1992. November 2004, web 1 June 2015.