Humans are drastically changing the planet by burning fossil fuels that release CO2 into the atmosphere, which comes into equilibrium with the ocean and lowers the pH — this phenomenon is known as ocean acidification. As a result, there is a pressing need to understand how species respond to these changes in the ocean. Researchers have studied this issue by exposing marine organisms to the low pH levels which are predicted for the future, and observing how it impacts traits such as survival, calcification, physiology, etc. Often the results are grim; many calcifying organisms (calcium skeleton builders such as corals and snails) lose their ability to calcify under low pH conditions and are unable to continue growth. But what if we weren’t getting the full story from these studies? Many researchers extrapolate the response of one population to its entire range, which may be inaccurate if the species spans a diverse geographic range and experiences variable environmental conditions.

The orange cup coral Balanophyllia elegans does span a wide geographic range (from southeast Alaska to Baja California), which exposes it to fluctuating pH conditions caused by the seasonal occurrence of upwelling that brings deep, acidic water to the surface. However, the frequency and intensity of upwelling differs along the coast. In Northern California, populations of B. elegans corals are exposed to pH 8 about 42% of the time due to more frequent and intense upwelling events. But coral populations from Southern California are exposed to pH 8 only 22% of the time because they experience less upwelling (Figure 1).

As a result, each population may be locally adapted to a different pH regime; i.e. populations of B. elegans have evolved adaptations that allow them to survive in their specific environment. Because these coral populations are naturally experiencing different pH levels, we'd therefore expect their response to predicted ocean acidification pH levels to be very different.

Fig. 1: Left: Balanophyllia elegans corals in their experimental setup at FHL. Right: locations of Northern and Southern B. elegans populations collected for study. Percent of time spent below a pH of 8 is shown in parenthesis (Kelly et al. 2013). Photo credit: Dr. M. Kelly. 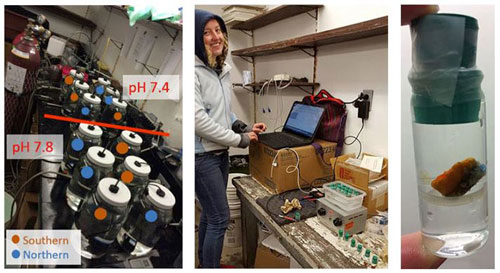 Fig. 2: Left: experimental jars containing B. elegans corals at a pH of 7.8 (ambient) or 7.4 (predicted in 100+ years). Middle: author with corals in line to get their oxygen readings. It’s a tad cold in the cold room (13°C/55°F)! Right: a coral individual in respiration chamber for oxygen consumption measurements. Photo credit: J. Griffiths.

To further understand the mechanisms B. elegans uses to cope with acidification, I compared gene expression profiles (the relative abundance of genes in the cell) between the populations. I wanted to know which genes allowed the Northern population to maintain high levels of oxygen consumption. Not only do the Northern and Southern populations have very different physiological responses to ocean acidification, but the genes that they expressed were strikingly different as well. The Northern population corals that maintained high levels of oxygen consumption were expressing genes that increased H+ (hydrogen) ion transport in the low pH treatment, as well as genes that lowered the corals' response to stimuli. The coral itself is able to regulate its internal pH levels by moving H+ ions around, so that processes such as calcification and energy production can continue. By not responding to stimuli and putting this energy instead towards transporting H+ ions in the cell, this may allow the Northern population to maintain high levels of oxygen consumption in the face of future ocean acidification.

Joanna Griffiths is a PhD student in Dr. Morgan Kelly’s lab at Louisiana State University. She first joined Friday Harbor Laboratories to take a course on Ocean Acidification in the summer of 2015 and returned in the summer of 2016 to complete an ocean acidification experiment. This research was supported by the Patricia L. Dudley Endowment for FHL.