Zostera marina, commonly known as “eelgrass,” is a submerged flowering plant that grows in many estuarine and coastal regions of the Northern Hemisphere and forms extensive meadows which in turn increase productivity and biodiversity. Eelgrass is widely distributed in the Salish Sea region of the Pacific Northwest. Recently, however, loss of these plants is commonly reported. While no single culprit has been identified, there is evidence that local increases in Hydrogen Sulfide (H 2S) concentration may kill seedlings before they reach mature plant status. This could result in plant losses at specific locations.

Hydrogen sulfide (H 2S) is a chemical compound notoriously toxic to humans and animals because it interferes with cellular respiration. More recently, studies have shown that it is also toxic to plants. Eelgrass is somewhat resistant to hydrogen sulfide because mature plants develop aerenchyma: tissues functioning as straws, delivering oxygen to the roots during photosynthesis. When this happens, the oxygen reacts with H 2 S to produce water and sulfate salt, which is less toxic to these plants. Seedlings and immature plants may not benefit fully from this resistance strategy because they produce less oxygen to react with surrounding H 2S. 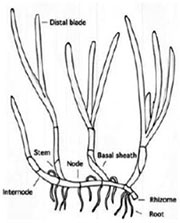 So how does H 2S permeate the aquatic ecosystem? Hydrogen sulfide is produced when microorganisms digest carbon-based material in the absence of oxygen. It smells like rotten eggs and is also found in sewers, swamps, and volcanic gasses. High levels of H 2S accumulate when excess organic materials or nutrients are introduced to the environment, such as when wood mills dump waste pulp into water bodies or when fertilizer washes off agricultural land, triggering algal blooms.

Our research set out to investigate the impact of hydrogen sulfide on eelgrass seedlings through a series of lab and field studies. In the lab, we exposed seedlings to various concentrations of hydrogen sulfide to determine how it impacted health, and the concentration required to kill 50% of the test samples (LD 50). To acquire test specimens, flowering shoots were harvested from False Bay (San Juan Island, WA) and seeds were extracted, then germinated in sterile conditions at the Biology Department of UW. Health was measured by the individuals’ ability to photosynthesize, indicated by their irradiance spectrum.

Laboratory trials demonstrated that minuscule doses of hydrogen sulfide actually increased photosynthesis and leaf health, but that higher concentrations shut down photosystem II, inhibiting photosynthesis. Even relatively low concentrations of H 2S (400-500 μM) appeared to significantly increase seedling mortality. While it was possible for seedlings to recover after short-term exposure to high concentrations, it was determined that the LD 50 boundary after 48 hours of H 2S exposure was 483 μM, and after one week the boundary level was 334 μM (Figure 2). 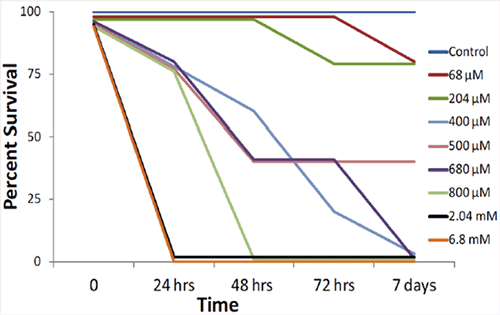 Similar experiments were carried out to test H 2S tolerance by seedlings of Phyllospadix scouleri (surfgrass), which is another native seagrass growing along rocky shoreline in the Salish Sea and endemic to the Northeast Pacific region. P. scouleri proved more sensitive than Z. marina (48 hour LD 50 = 430 μM; 7 days LD 50 = 86 μM), although the negative response to H 2S was slower than that of Z. marina, most likely because the root mass of P. scouleri is less than that of Z. marina. This larger root mass and greater surface area enabled faster H 2S uptake by Z. marina.

So, what concentrations of H 2S appear in the Salish Sea? Dooley and collaborators sampled 85 stations in the San Juan Islands, Bellingham Bay, and the Anacortes vicinity. Eelgrass abundance ranged from "formerly present but currently locally extinct" to high-density meadows. In locations with healthy meadows, the sediments contained low levels of H 2S (0 to 10 μM) and low percentages of organic matter. Locations with reduced or extirpated eelgrass populations had high levels of H 2S (100 μM to 1mM) and a high percent of organic matter in the sediment. We suggest that measuring H 2S concentrations be considered when assessing observed losses of seagrasses in the Salish Sea.