Edward Sylvester Morse (1838-1925) was a greatly admired scientist and educator both in the United States and Japan. In the limited time he spent in Japan (1877-1883), one of the most important things E.S. Morse did was establish the first marine laboratory in the Pacific at Enoshima in 1877.

Morse engaged in active research on Brachiopods, and his correspondence with Charles Darwin (seen at the University of Tokyo's Archeology Museum) indicated the mutual respect they had for each other. In the U.S., Harvard University welcomed Professor Louis Agassiz from Switzerland, who Morse was invited to work with and was involved in the establishment of the Museum of Comparative Zoology. In addition, Morse participated with Agassiz in teaching about – and exposing high school teachers to – natural history at the Penikese Islands off Cape Cod, which was the forerunner to the Woods Hole Marine Biological Laboratory.

An amazing writer and illustrator, Morse left a legacy of experience by writing textbooks on zoology, making observations on a “day by day” basis in Japan, and discovering, dating and cataloging Japanese pottery. The history of Edward Sylvester Morse and his activities in Japan have received continuous loyal support: there is a Morse Society in Enoshima, and a conservationist group has preserved the site in Omori where Morse found the historic kitchen midden, as well as encouraging educational activities in the schools. 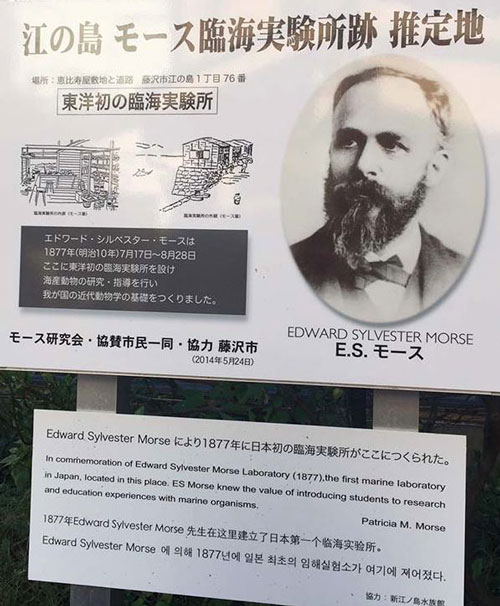 Edward Sylvester Morse plaque in Enoshima, with added words by Trish Morse which were dedicated in 2016 while she and Billie Swalla visited the site.

The development of a new Natural History discipline in Japan and the U.S. in the late 19th century saw Morse's new marine lab at Enoshima followed by establishment of the Misaki Marine Biological Station (MMBS) in Japan (1886), the Marine Biological Laboratory (MBL) in Woods Hole, MA (1888), and the Puget Sound Marine Station (now UW Friday Harbor Labs) in Washington (1904). The first Director of the MBL in Woods Hole was Charles O. Whitman, who E.S. Morse had named to replace himself as Professor of Zoology at Imperial University from 1880-81. Morse and Whitman had many Japanese students that they sent to various universities in the U.S. and other countries, while Japanese marine scientists were welcoming researchers from other countries to study natural history in their rich waters. A similar exchange hub developed at FHL, with a focus on marine zoology. Exchange visits among senior scientists – for example, Professors Arthur and Helen Whiteley to the laboratory of Professor Motonori Hoshi – were the beginning of an ever-widening exchange with post-doctoral students and others continuing to pursue marine studies in molecular aspects of development, particularly genomic studies.

In 2011 Professor Makoto Omori visited FHL and when I went to Japan the next year at his invitation, our discussions about E.S. Morse brought together information from various mentors including Professors Paul Illg and Aubrey Gorbman (UW), Professor Howard Bern (UC-Berkeley) and Professor Bill Clench – Chair of the Mollusc Department at Harvard. It was during that memorable 2012 trip to Japan that Drs. Motonori Hoshi, Makoto Omori and I dreamt of creating the structure for future scholarly exchanges that would encourage strong academic experiences for faculty and students at participating marine labs in our two countries. We wanted to encourage exchange scholars to learn new procedures, share experimental technologies, and gain innovative insights into their research. As part of that program, the E.S. Morse Institute was formed. The visiting scholars that engage in research or participate in courses and receive support from this program become Fellows in the Edward Sylvester Morse Institute. It was anticipated that the Morse Institute's lifetime memberships would develop further cooperative interactions among the inductees, and after five years we are witnessing these connections bloom. 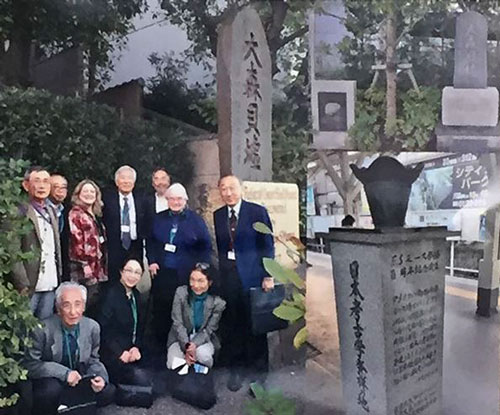 The E.S. Morse scholar exchange program at MMBS has been generously supported by K. Mikimoto & Co., Ltd. Mikimoto Kokichi is credited with creating the first cultured pearls at the MMBS, and this scholarly support was originally developed by Professor Koji Akasaka (Director of MMBS) and the University of Tokyo Development Office. This has brought generous support to the E.S. Morse scholar exchange, and each year the students and faculty from the Misaki Developmental Biology Course meet with the President of Mikimoto, Mr. Hitoshi Yoshida, at the beautiful Ginza Street Headquarters in Tokyo. In addition, Dr. Swalla and I joined the University of Tokyo's celebration of the 140th year of the Misaki Marine Biological Station. At the celebration it was reported that the generous support of Mikimoto & Co. is to continue! 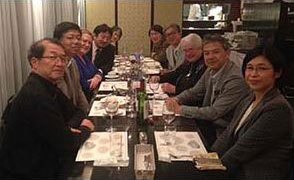 Dinner at the University of Tokyo with the leaders of the Misaki Marine Biological Laboratory celebrating their 140 years of existence.

In November 2016 Professor Billie Swalla (Director of FHL) and I attended the 22nd International Congress of Zoology and the 87th Meeting of the Zoological Society of Japan in Okinawa. The President of the joint meeting was Professor Hiroyuki Takeda, from the University of Tokyo and one of the early E.S. Morse Senior Fellows. In addition to these meetings, we attended a presentation ceremony at the Japan Academy of Sciences, presided over by Emperor Akihito and Empress Michiko. The award recipient was Professor Stephen Hubbell (UCLA), who was also a mentoring professor to Billie at the University of Iowa when she was an undergraduate! On this occasion it was an added honor to meet and talk science with his majesty Emperor Akihito, who had been a visiting scientist in 1953 at the Woods Hole Oceanographic Institute. That is where I grew up, and in 1975 had the wonderful opportunity to be in a group of scientists who met with the Sowa Emperor, his majesty Emperor Hirohito, for a discussion of various invertebrate groups he had studied in Sagami Bay.

At the 2016 meeting of the Society for Integrative and Comparative Biology (SICB) I talked with an E.S. Morse Junior Fellow, J.D. Laurence-Chasen, and viewed his research poster. J.D. was a participant in the Invertebrate Development course at the MMBS in Japan. Currently a senior at Brown University, he will continue his graduate studies in functional morphology and system neuroscience, using X-Ray Reconstruction of Moving Morphology (XROMM) to accurately measure complex bone motions in a variety of species. J.D. told me that it was the course he took at MMBS that developed the passion for him to continue graduate work in zoology. 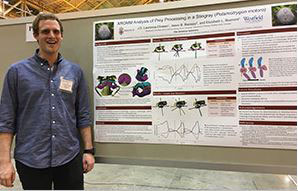 Poster presentation of E.S. Morse Scholar J.D. Laurence-Chasen at the Society of Integrative and Comparative Biology meeting in 2016.

An important part of the Exchange program is to highlight the scientific results produced by scholarly exchanges. Expectations of scientific excellence underlie the courses and research, and the beauty of the marine environments around these marine stations on opposite sides of the Pacific lends to directly observing biological diversity – an important factor in E.S. Morse’s approach to seeing and asking questions about organisms in their original environment. For current scholars, this might entail discussions while gazing at organisms attracted to a light under dark docks, field trips to collect special organisms, observations utilizing a new kind of microscopy, or seminars by the visiting scientists; all of these activities characterize the busy period of time the exchange scholars spend at their host institutions. 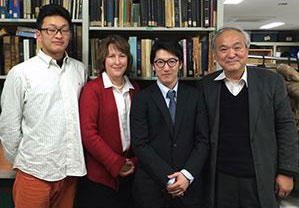 It has been a privilege for me to renew these collaborative feelings by visiting places that Morse frequented, by meeting those who have preserved his many contributions, and by sharing our common beliefs in the importance of research and education for future generations of marine scientists. In 2017, marine organisms continue to be a rich resource for scientific investigations in developmental, cellular, physiological, ecological and environmental studies. We have a far better understanding of the evolutionary relationships among species and this research is enhanced with genomic studies, advances in microscopy and computer technologies, and interdisciplinary approaches; all of this creates an exciting future for students entering marine studies, and we look forward to any support you may want to lend.

Collaborations continue to be forged, especially between MMBS and FHL (Director Billie Swalla). During this fifth year of the Morse Institute's existence, funds have been raised at FHL for an Endowed Scholarship for Japan / U.S. Exchange that will also support the program in the future. We have developed a website that describes the many activities undertaken over the years, and invite you to read detailed outcomes of these exchanges on the E.S. Morse Institute website (link below). We will have a call soon for a new course at MMBS February 26- March 2 of 2018.

Donate to the E.S. Morse Institute