Worldwide, kelp forests are ecologically important because they provide habitat and a food source for a wide variety of organisms including invertebrates and fish. Bull kelp (Nereocystis luetkeana) is a large, annual seaweed that is very common in the Salish Sea of Washington State, especially in the San Juan Islands. The mature individuals of this “charismatic megaflora” can reach up to 30 meters in length from the base of their holdfast to the top of their round bulb (Figure 1). 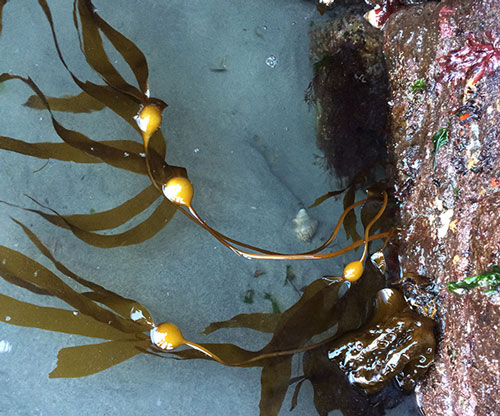 However, the surface of a “bed” of bull kelp only hints at the complexity below, and juvenile bull kelp face two main problems: competition and herbivory. Bull kelp is an annual species, so individuals must grow and reproduce in a single year. Thus, small bull kelp individuals just beginning to grow must compete with other kelp species that live for more than one year. Scientific scuba diving (Figure 2) allowed me to successfully conduct my subtidal experiments, and I have been very fortunate to have many enthusiastic dive buddies and boat tenders. 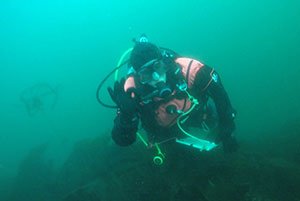 I set up my first long-term field site near south Shaw Island, to compare kelp growth in plots with and without both (1) competition and (2) added propagules (“seeds”). With help from Darby Flanagan (Figure 3), an undergraduate student that I co-mentored with Dr. Megan Dethier in FHL’s Research Experience for Undergraduates program, we added a second field site near San Juan Island’s Point Caution. 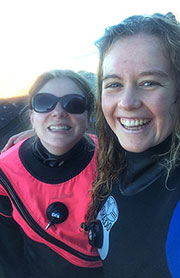 We looked at seasonal differences in bull kelp appearance, which meant some chilly winter diving as well as multiple dives per day in the summer. Our field experiments at both sites have shown that more bull kelp appear when other kelp species are removed, especially in the spring when conditions are likely best for kelp growth. I also investigated which seaweeds the local “kelp” crabs (Pugettia producta, Figure 4) chose to eat. 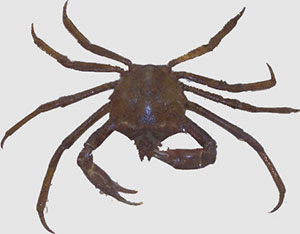 Laboratory feeding experiments have shown that these large crustaceans choose to eat bull kelp over other local seaweeds in the San Juan Islands. My collaborators and I demonstrated that these crabs, which are found from California to Alaska, may have different feeding preferences in different parts of their range based on which food sources are most abundant. In California, giant kelp (Macrocystis pyrifera) is considered kelp crabs’ favorite food. It doesn't usually grow within the Salish Sea, but the currents do bring drifting "paddies" of giant kelp through the Strait of Juan de Fuca. We collected fresh specimens from a pile that drifted ashore on San Juan Island (Figure 5) for our experiments but our local kelp crabs barely touched it, much preferring to eat bull kelp. 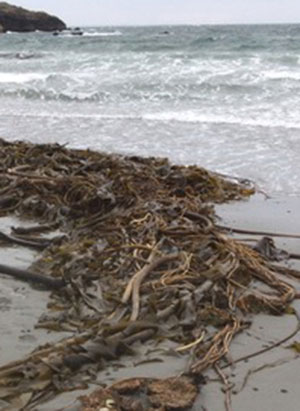 I set up a field experiment to quantify how herbivory influences growth, by attaching small bull kelp (stipe length 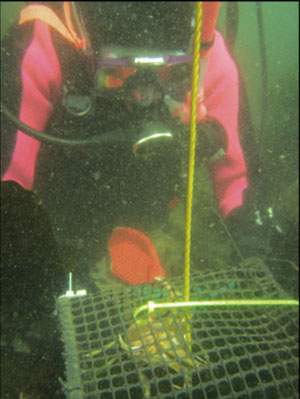 Understanding changes in distribution and abundance is especially important in the case of foundation species such as canopy-forming kelp. Kelp forests are an important target for conservation due to the crucial habitat they create for other economically, ecologically, and culturally important organisms. A better understanding of feeding preferences of large crustacean consumers helps to clarify their influence on food webs in kelp-forest habitats, which is crucial as these systems begin to shift in a changing ocean.

Katie is a recent graduate of the University of Washington’s Department of Biology. She conducted all of her dissertation research at Friday Harbor Labs.