The best science teaching is intimately related to research, and this is why many researchers also teach summer courses at the Friday Harbor Labs. These courses attract the best undergraduate students from across the U.S. and the best graduate students from around the world. These students ask some of the most insightful and penetrating questions as part of individual or group projects, which can lead to Masters or PhD research and influence an entire research career.

FHL’s summer 2014 Marine Botany class began a group project to DNA barcode the marine macroalgae (seaweeds) in the waters around San Juan Island (SJI) and along the outer coast of Washington. The exposed coast, with different hydrodynamic forces and salinities compared to the more protected and less saline waters around SJI, hosts a different suite of seaweed species. Both habitats boast high species diversity, but due to climate change and ocean acidification all marine habitats are changing. We need to know what seaweeds are present now so that we can recognize new arrivals and track local extinctions. 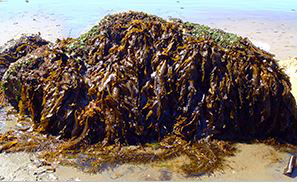 We have two different problems when trying to identify seaweed species based on morphology: individual specimens of a single seaweed species may be morphologically highly variable, but conversely, multiple species may appear nearly identical. Thus, we need a better method to identify species than their morphological characteristics: DNA barcoding. The barcode that we are seeking is a segment of DNA that’s a unique identifier for each species. Initially scientists thought there would be a single gene or segment of DNA that was present in all organisms (bacteria, algae, plants, fungi and animals) but also unique for each species. Such a universal barcode has not been found, but suitable DNA barcodes for major groups of organisms continue to be defined. For two of the major groups of seaweeds – the red algae and the brown algae – a useful barcode is the gene that codes for a particular protein essential for photosynthesis, called rbcL. With over 100 species of brown algae and 300 species of red algae in the flora of Washington, we have lots of species to rbcL-barcode! 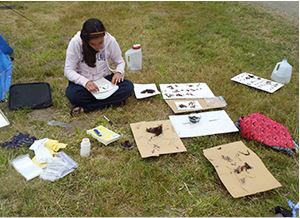 During the five-week class in 2014, along with their coursework and individual research projects, students rbcL-barcoded three species of brown algae and 22 species of red algae. They first collected specimens and assigned a preliminary name using an identification key based on characters they could see by eye or under a microscope. Then they pressed the seaweed specimens on paper just as you would a flowering plant or fern that you wanted to preserve. These pressed specimens are a permanent record of the species. We deposited specimens that we pressed – and from which we obtained DNA sequences – in the Burke Museum at the University of Washington. These specimens are a record of what we found, and they are available for study by other researchers. Before pressing the seaweed, students removed a small fragment about the size of a fingernail clipping, and placed it in silica gel desiccant to rapidly dry the tissue for later DNA analysis. [Silica gel is the drying agent in all those little packets that come with optical equipment or electronics that we buy.] This rapid drying keeps the DNA in the seaweed fragment from being broken into small pieces. 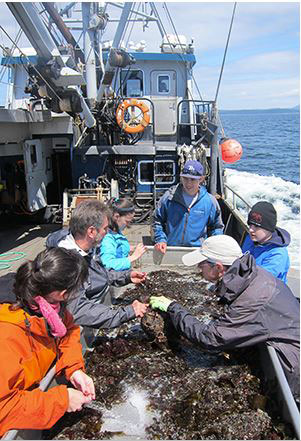 Then begins a procedure to extract only the DNA from the seaweed fragment. Once we have “clean” DNA, it is placed in a small plastic tube along with buffer solutions and the chemical building blocks of DNA, and subjected to a cycle of temperatures to make millions of identical copies of the rbcL barcode. Through another series of steps, we visualize the sequence of the rbcL barcode on a computer as a string of A’s, C's, T's and G's: the building blocks of the genetic code which make up the gene. We can then compare these strings made up of over a thousand of these A-C-T-Gs in various arrangements, each arrangement unique for each species. 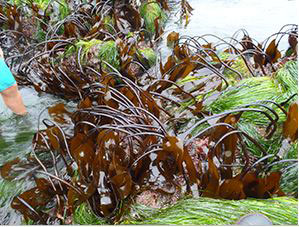 Laminaria setchellii, one of the charismatic brown algal species, growing among seagrasses at Shi Shi Beach.

Over the last 10-15 years, researchers have been doing this and have found dozens of previously overlooked species in the seaweed flora of the Pacific Northwest.

Scientists call many of these “cryptic” (hidden) species, as they look so similar to other species that we cannot tell them apart by eye or even using a microscope. We will continue the DNA barcoding project during this summer’s Marine Botany class. Over time, we hope to barcode all the seaweed species present in Washington and in the entire north Pacific ocean.

Dr. Gabrielson is an Adjunct Assistant Professor and Herbarium Research Associate at the University of North Carolina (UNC) Chapel Hill, and Dr. Freshwater is a Research Specialist at the Center for Marine Science at UNC Wilmington. Both took FHL's Marine Botany class while graduate students, Paul in 1975 and Wilson in 1984, and they both credit the course with convincing them to become marine biologists. Between them, they have published over 130 peer-reviewed scientific papers.The rbcL barcode sequences that we generated in 2014 were put into BOLD: the Barcode of Life Data System (www.boldsystems.org) and are available to scientists and to the public. Scientists compare sequences generated from other regions, both adjacent to Washington and from around the world, to find similarities and differences and to track changes in species distributions.