We live in an interesting time with respect to earth’s ecology. Several centuries of extreme overhunting by humans – first by European colonials and later with commercial overexploitation and human population expansion – have resulted in animals at the top of most food webs being removed.

Top predators can influence entire food webs by keeping other consumers in check and stabilizing ecosystems, but we have little understanding of historical food web structure because predator loss (known as trophic downgrading) began so long ago. Conservation research has found that the loss of top predators comes with a heavy cost, and groups such as the International Union for the Conservation of Nature (www.iucnredlist.org) have recognized some of these key species are under threat from extinction, mobilizing efforts to prevent further loss of biodiversity.

In the United States, legislation such as the Endangered Species Act and Marine Mammal Protection Act has helped protect vulnerable species from the risk of extinction by establishing laws to protect them and their habitats. As their populations rebound, the return of these animals to their historical ecosystems will require us to rethink our underlying theories of their true breadth of habitats.

For example, we are finding that sea otters can be successful outside of the ocean by using tidal salt marshes for food, rest and pupping. Alligators were once thought to lack the ability to process excessive salt, and therefore avoid marine environments.

However, my colleagues from Duke University (Drs. Brian Silliman and James Nifong) have found that not only do alligators use marine environments, but they can successfully hunt crabs and sharks. These recolonization events also present a challenge to conservation, as managers adapt to novel food webs.

One species that has benefitted from conservation efforts over the last century is the North American river otter (Lontra canadensis). Like many animals prized for their pelts, the river otter was under threat from overhunting, and by the early 19th century it was at risk for extinction. However, primarily local-scale conservation measures and stricter water quality and pollution standards have allowed the river otter to rebound, and it now inhabits most of North America.

River otters are semi-aquatic mustelids (the weasel family), and are traditionally thought to be freshwater animals. However, across both coasts of North America, river otters are expanding into coastal environments. Certain populations along the west coast rely entirely on marine food sources because they do not live within proximity to major freshwater sources, such as the river otters in Drakes Estero in California. 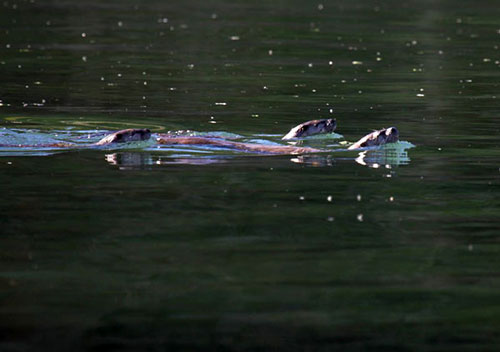 I moved to San Juan Island with my family last year as FHL's post-doctoral fellow. Working in Lab 1 with Dr. Megan Dethier and a view of FHL's fleet of boats, I knew when I arrived that there aren't currently sea otters at FHL, but there are river otters. I hadn't realized how close I would be to all of the action.

The FHL docks provide a unique opportunity to observe river otters, who frequent the docks and leave little "surprises." These droppings (scat) provide a glimpse into the river otter’s diet, and when combined with camera trap data can allow us to determine the timing of their foraging bouts and even the size of the animals. The camera traps have been especially important because at FHL these are mainly nocturnal animals, where 95% of sightings have been at night, and beginning in November often involved freezing temperatures.

River otters caught on the FHL camera trap. To the left is a rare sighting of a daytime river otter, with a scat sample in front of it. On the right is more typical nighttime sighting of a river otter. Data from these traps gives us temperature, time, behavior, density and size of this group of river otters.

Preliminary observations indicate that the diet of the river otter is broader than previously thought, and at any given time can consist of fish, crabs, clams and mussels, algae, and some unidentified terrestrial mammals and vegetation. This was all evident in a single CT scan processed in Dr. Adam Summers' lab.

This summer, along with three Doris Duke Conservation Scholars (Soledad Soto, Nusrat Noor and Bashir Ali), we were interested in further understanding the prey diversity of these river otters who seem to behave more like sea otters on San Juan Island. To complement the new data set, I plan on expanding out to cover other parts of the river otter's range to investigate the ecology of these fascinating top predators, and see how the diets of freshwater-focused individuals differ from marine-focused ones. 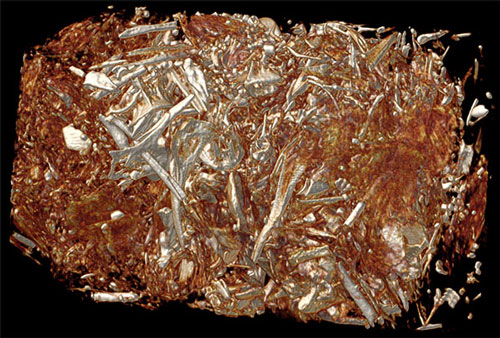 CT scan of scat A CT scan (aka, "ScatScan") of river otter scat collected at the FHL dock.