Every morning when I was at Friday Harbor Labs last Fall, I would rise with the birds before sunrise and walk from my Whiteley Center cottage through the chilly indigo dawn to turn on the fireplace in the Macfarlane Art Studio, a remodeled former carriage house. While I waited for the studio to warm up I would have my tea and breakfast in the dining hall while studying a bit of anatomy for an hour or so, and chat with some friendly oceanography students. Returning to the studio, I would turn on an audiobook to keep me company while I sat under full-spectrum desk lighting and worked on the focus of my residency: drawings of cute sea otters and watercolors of kelp forest seascapes.

After lunch I would return again to the studio until supper, doing much the same. In the evenings, at first I was returning to my cottage to work on finishing up a client’s commission, because paid work didn’t quite stop in time for my residency! But on most November evenings I was back in the studio until late, squeezing as much productivity as I could out of my time in that magical space. Even in inclement weather it was cozy and warm in the bright studio, with the sound of rain on the windows. When the sun came out I would throw open the studio's French doors to enjoy the breeze and watch the light dance on the water. In all weather the deer wandered past in search of the freshest shoots of grass; at night I was occasionally honored with a visit from a red fox. When I needed inspiration I did not need to look far to find it.

I had told myself I would take weekends off and spend more time wandering the grounds, but honestly I just wanted to work. The environment at FHL was relaxing enough that I felt I was simultaneously on vacation and also able to work harder at my own personal artistic pursuits, and with more focus, than I had ever worked in my life. 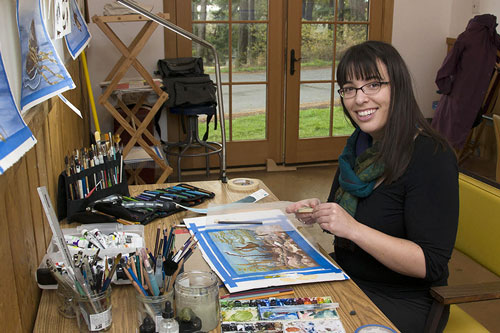 Jen in the Macfarlane Art Studio

As a freelance scientific illustrator, I don’t often have time to work on my personal projects. I typically help scientists who need a figure for their research or writing, perhaps for journal publication, perhaps for promotional purposes on social media or other media avenues, or for book publication, poster design, etc. Sometimes this can be faithful drawing(s) of particular species, a more conceptual infographic, a visualization of data, a process diagram, a map or depiction of another spatial relationship…the possibilities are endless for visual interpretations of science. Occasionally I do similar work for individuals or organizations on the periphery of science. Other projects that I am interested in include murals, interpretive panels, museum displays, or textbook illustrations, to name a few. Rarely, I also venture into the world of personal commissions.

I trained in the graduate program for scientific illustration at California State University Monterey Bay (CSUMB) in 2014-2015. I had heard about this program in early 2013 from naturalist and author John Muir Laws (Jack), an alumni of the program himself and a national nature journaling guru. I realized that science illustration was an actual possibility and viable career path — with my own education in science and art, I had the exact background and skill set required to be a contender for this program. I spent all of 2013 building a portfolio which Jack helped me to refine, and then he kindly wrote me a reference for which I am truly grateful. The program was transformative, inspiring, incredibly challenging, and fully rewarding of the hard work that myself and my 14 colleagues put in that year. We refined our drawing and composition skills, studied botanical and zoological anatomy, learned proficiency in many types of traditional media, immersed ourselves in digital illustration as well, and touched on some human anatomy, animation, and graphic design.

While I was in the program I lived in Santa Cruz, California, approximately an hour’s drive north of Marina where CSUMB is located. Every day as I drove to school past Elkhorn Slough, I would think of the rafts of otters that inhabit the estuary, although I couldn’t see them from my car. This inspired me to create a pen-and-ink illustration of a sea otter, sea urchins, and giant kelp for one of my school projects. Program director and instructor Ann Caudle suggested this illustration as a candidate for a second project, a re-do of a past illustration that wasn’t yet at its full potential, perhaps in color and fixing a couple issues. I had another project in mind, but I filed this suggestion away for later. Then one day driving past the estuary, I had a flash of inspiration. I pulled over my car, got out my phone, and narrated to myself on the rest of the drive the whole story of a mother and baby otter and their kelp forest. I knew I had to write and illustrate this as a full-color children’s book, but when? The problem with being a busy freelancer with burning ideas for personal work is that the paid work overshadows the personal work, which gets left behind. 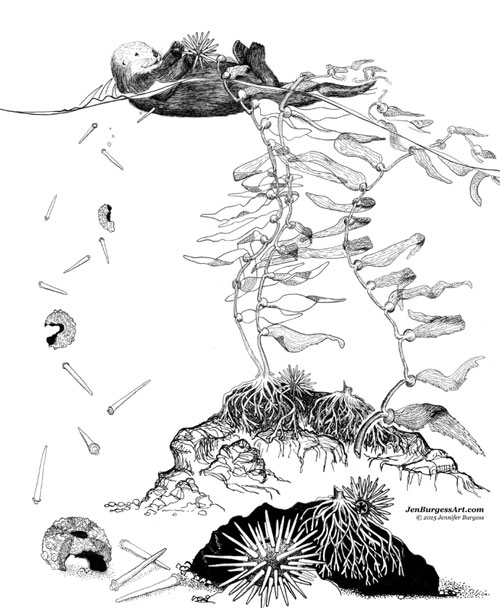 The opportunity to complete an artist’s residency at UW Friday Harbor Labs gave me the time and space to get a great head start on this project. I will be finishing up the layout and creation of a book dummy this summer, hopefully ready to pitch to publishers in early fall. I am incredibly grateful to all the folks at FHL who made my time here so rewarding. I will be sure to keep you all updated on my project’s progress as time goes on!

The author Jen Burgess is a Canadian scientific illustrator currently living and working in beautiful Victoria B.C., just a hop across the water from San Juan Island. She is a member of the Guild of Natural Science Illustrators (gnsi.org) and the Island Illustrators Society (islandillustrators.org), and is currently leading a weekly adult NatureSketch class series with the Bateman Foundation (naturesketch.org). She is currently open to considering commissions but will be prioritizing her book project this summer.