In 1958, a young scientist arrived at Friday Harbor Laboratories supported by a fellowship, with a mission to bring home a kinorhynch for his advisor. Despite not knowing what a kinorhynch was, he agreed to try, and in 1960 Robert Higgins described his first kinorhynch species from samples taken at Friday Harbor, with many more to follow. I knew none of this when my advisor, Kevin Kocot, sent me to take Marine Invertebrate Zoology with Gustav Pauley and Peter Funch at FHL. He had taken the class himself years before, also with Gustav! He sent me with conviction: "It was an absolutely formative experience for me. It will be for you." 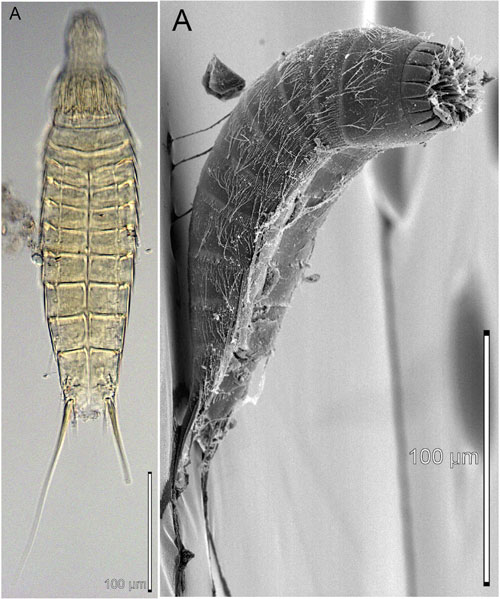 I would never have been able to attend the course at FHL if not for the Alan J. Kohn Endowed Fellowship. I had just moved to my PhD program the semester prior, and a cross-country trip was simply not in my budget. I was so grateful for the support that FHL offered to students. I packed too much sampling gear (and not enough socks) and left for Washington.

Anytime I go into the field without him, Kevin sends me with a "scavenger hunt Post-It" list of organisms to bring back in preservative. On my FHL list, one item read "kinorhynch, clean as you can get it, RNALater.” At this point I hadn't met most invertebrate phyla. Like Higgins in '58, I had no idea what a kinorhynch was. But I had a Post-It!

A week or two into the course, Peter Funch commented that he was looking for kinorhynchs in the mud. I asked if I could have a little bit. He handed me a dish with a raised eyebrow and a smirk to which I would become accustomed quickly. He taught me how to look, how to see the microscopic animals, but warned me that they were often elusive. "I'll leave you to decide where the line is between determined and really, really stubborn."

Days later, I found one. We put it on a microscope slide, it wiggled and moved its little mouth cone, and I giggled helplessly at the strange creature’s motion! It turns out that playing in sediment is dangerously addictive. You turn a microscope lens toward it and a completely foreign world comes to life, revealing a wriggling mass of animals where before was just mud or sand. I'd sit at the microscope, put on headphones, and apparently dance in my chair while I worked. 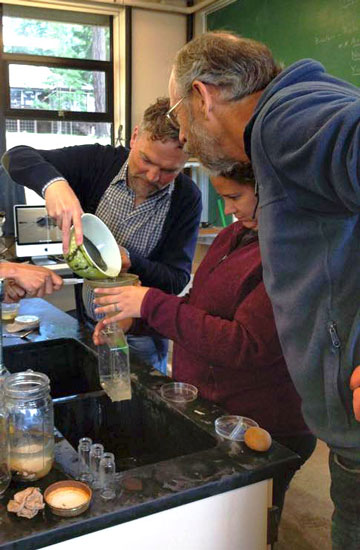 Peter Funch, Rebecca Varney, and Gustav Paulay poring over a mud pour in lab at FHL.

This is the gift of classes at FHL: I had the freedom to dive headfirst into a bucket of mud. I could spend all day at the scopes, because as long as I was learning about invertebrates I was fulfilling the course objective. Gustav and Peter’s class was graded not by tests but by the knowledge we gained. Discovery is embraced, encouraged, and supported in a way that I have not seen since. So, I started finding kinorhynchs. Peter laid Libbie Hyman's book on my desk, and I started labeling the slides I presented to him with genus names (often with large question marks) and waited for him to add species. Gustav sighed and accepted that part of his desk had been claimed by the "kinorhynch conveyor belt." 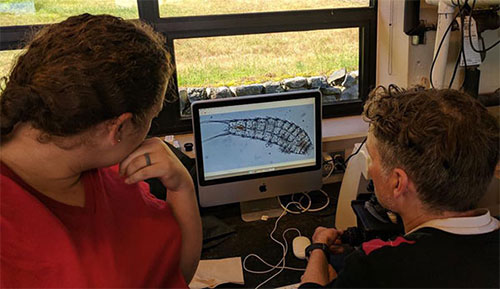 Rebecca and Peter examining a kinorhynch microscopy image in lab at FHL.

After a day on the R/V Centennial where the rest of the class exchanged amused glances as Peter and I caressed the Van Veen grabs of mud and filtered them like we were panning for gold, I found a different kinorhynch. Peter casually declared, "I don't recognize this one. If you find more, we should describe the species together. And you should do some genetics on it. Ask Kevin."

If you want to know what an amazing PhD advisor looks like, imagine being sent somewhere to begin your dissertation on mollusks, and messaging back "hey so we think we found a new species of kinorhynch, if I bring it back in RNALater can I genotype it?” I still remember yelling his reply across the lab at FHL: "PETER, KEVIN SAYS WE CAN SEQUENCE A WHOLE TRANSCRIPTOME!" and the other students looking between us like we were insane. 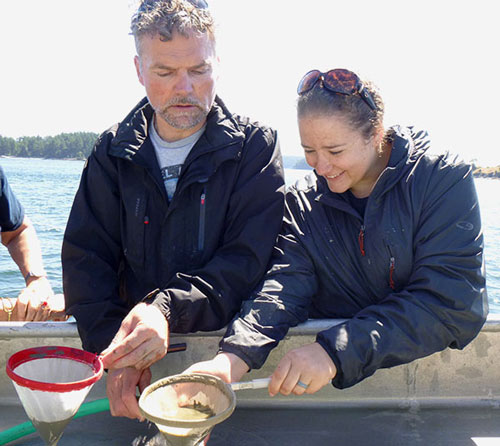 Just like that, my evenings became extra time in the lab, searching out the requisite number of specimens needed to do scanning electron and light microscopy, as well as the chosen specimen for genetics. But my late nights were never spent alone. Every lab had students working late out of sheer enthusiasm for science, and we shared coffee and trivia in equal measure. At the end of the class, I sat down with Gustav and Peter to be graded. They laughed heartily at my lab notebook (all our animal sketches), which contained an entire section of meiofauna and dismally fewer drawings of larger animals. One kinorhynch drawing in my notebook read “Echinoderes sp.” because that one was as-yet undescribed.

After the class wrapped up, Peter got together with kinorhynch expert Martin Sorensen for microscopy, and I got to extract RNA from one precious microscopic animal. We wrote a paper, and though these things take time to finish, we described a new species. I got to name it! As I reflected on what led me to that point, I thought about how incredible it was that a donor would fund a student’s adventure without ever meeting them, never knowing what might happen.

The student support at FHL does that, every summer, for so many students. I reflected on how much my time at the Labs had changed my life. A formative experience. The choice for species name became obvious.

This past June, I got to add a note to that kinorhynch drawing in my notebook: “Update 2019 Jun19 Echinoderes kohni (Varney 2019),” named for Alan Kohn.

It amazes me still that "my" kinorhynch is out there alongside those described by a graduate student almost sixty years before. There is still so much to be discovered in that amazing place. If I am lucky, someday I will send my own student to Invertebrate Zoology at FHL, and tell them “it will be an absolutely formative experience.” Until then, if you see any of my babies in the mud out there, tell them I say Hi!

You can help us support future Kohn Fellows by donating to the Alan J. Kohn Endowed Fellowship at FHL here.

Rebecca Varney is a PhD Candidate at the University of Alabama. She is working toward completing her dissertation on chiton genomics and radula iron mineralization, and will continue to focus on understanding the emergence of novel traits across evolution. Her advisor still has no idea how many kinorhynchs she has in her desk. You can follow heron Twitter @RebeccaMVarney, or find her at http://rvarney.people.ua.edu/.