Not far below the surface of the water, I observe everything around me. Emerald gunnels coiled around eelgrass cautiously eye me, while a vibrant orange Gonionemus jelly drifts past. On seemingly every surface sit fat bubble snails, decorating blades with their gelatinous yellow egg cases. And there! A bean-sized opalescent nudibranch gracefully cruises along, its cerata swaying in the water. I pause, soaking it in. All I hear are my own slow, measured breaths through my SCUBA regulator, everything else muted underwater. Then, I begin picking seagrass. 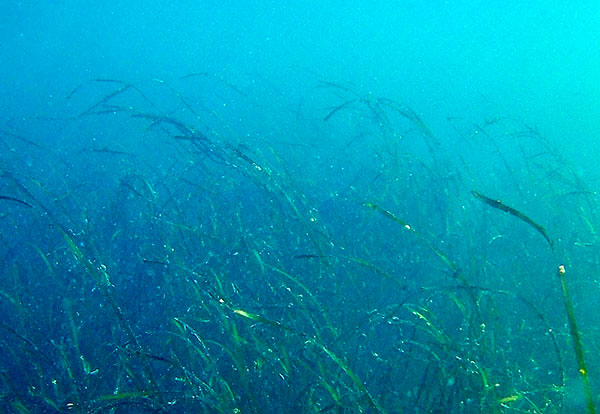 Subtidal seagrass meadows are captivating and intriguing. What are disease levels like in these environments? What role might invertebrates play in disease transmission? 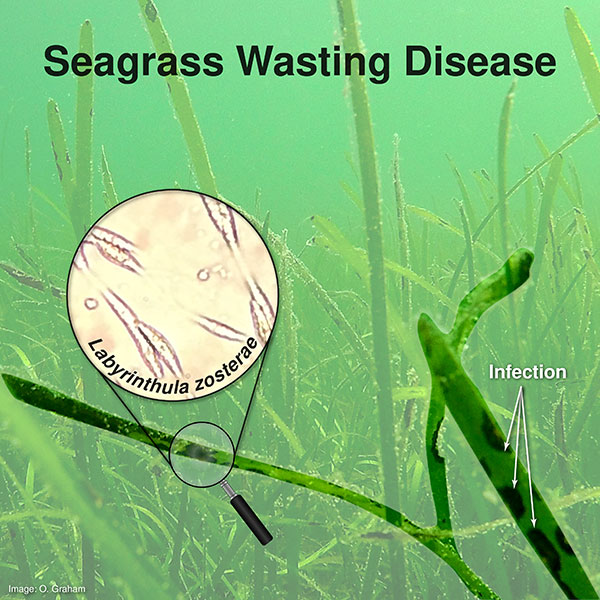 Though this may sound like underwater meditation, I was also conducting one of many subtidal surveys for seagrass wasting disease (SWD). Caused by a marine slime mold-like protist (Labyrinthula zosterae), SWD infects eelgrass (Zosterae marina) and consumes the plants’ chloroplasts, leaving necrotic lesions in its wake. Infection can ultimately kill the host plants, and decimated eelgrass meadows worldwide in the 1930s and 1940s and continues to persist today. Though current research shows some environmental conditions like temperature and salinity affect disease levels in eelgrass meadows, there are still many unknowns about the triggers for disease.

Given that warming oceans are already tipping the scales in favor of some marine pathogens like black band disease in corals and abalone withering syndrome, it is critical to understand the role of environment on SWD so that we can better predict and manage disease outbreaks. Fortunately, this is fertile ground for PhD research, which is where I found myself – and Dr. Drew Harvell – in 2017.

As a new PhD student in Drew’s lab, I wanted to help assess SWD levels – not just within our island archipelago around FHL but also beyond – to capture a large-scale view of disease in the Pacific Northwest. From my previous work, I also found there were key differences in disease levels between subtidal and intertidal meadows, likely due to different environmental regimes and stressors. Primed with this knowledge and excited to learn more, we embarked on our journey to assess disease from Prince of Wales, Alaska to Puget Sound, WA. 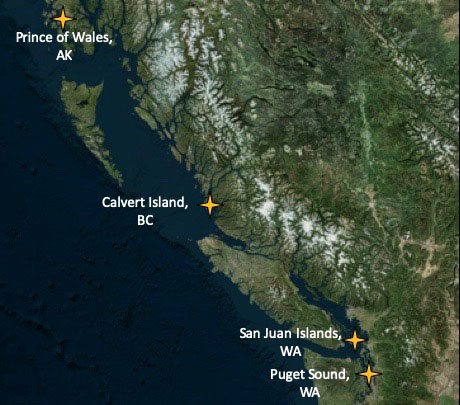 A project of this size and scope required a team of equally eager collaborators. Fortunately, we had such a group ready to assist with this challenge: Dr. Tiff Stephens and Dr. Ginny Eckert at the University of Alaska Fairbanks; Dr. Margot Hessing-Lewis, Angeleen Olson, and Emily Adamczyk at the Hakai Institute and University of British Columbia, respectively; Morgan Eisenlord at FHL; and Dr. Nick Tolimieri with NOAA in Seattle, not to mention countless student volunteers, dive buddies, and boat tenders to help with the surveys. This project was a true team effort!

In the summers of 2017 and 2018, we surveyed 19 sites across these 4 geographic regions, collecting eelgrass in both subtidal and intertidal meadows as well as these site-specific data: eelgrass densities, canopy heights, salinity and temperature. We collected a staggering 5,536 eelgrass blades for disease analyses. Here's a video of Corinne Klohmann (Cornell 2018) and myself conducting a sunrise seagrass survey.

Then our other collaborators, Dr. Carla Gomes and Brendan Rappazzo at Cornell University, stepped in. With their expertise in computer science they developed a computer learning algorithm, EELISA (EELgrass Image Segmentation Analyzer), to detect and measure the area of SWD lesions on our eelgrass blades. EELISA standardizes disease measurements and expedites image analyses. Now, we are running our images through EELISA to answer our burning questions: how does SWD vary across a broad latitudinal gradient, and what roles do environmental factors play? 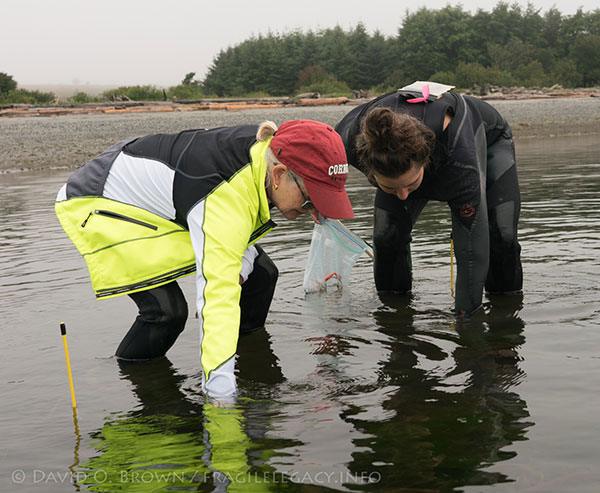 Drew and Olivia in the field Drew Harvell (left) and myself collecting eelgrass for disease measurements. Photo credit: David Brown.

From our preliminary analyses, disease prevalence (the proportion of infected blades collected) was higher in 2018 compared to 2017 across tidal regimes and for nearly every geographic region. Likewise, across both years subtidal meadows almost always had reduced disease prevalence compared to intertidal meadows. 2017’s results indicate that warmer sites have higher disease levels. Now we are working through the rest of these data to determine levels of severity and effects of other environmental conditions on the health of these eelgrass meadows.

Building from this study, our lab expanded the scope of our project and is working with additional collaborators to examine SWD along the entire West Coast. Supported by a $1.3M NSF grant, we are now exploring variation in SWD levels across the range as well as the role of eelgrass microbiomes and invertebrate vectors, from Alaska to San Diego, CA. As part of this larger project we are also using drones to map changes in eelgrass meadows over time.

Ultimately, I hope we can use our findings to identify at-risk eelgrass meadows that may require conservation or restoration efforts. The challenge, of course, is to translate our data into actionable steps. To properly think this through just might require additional underwater meditation.

Generous funding from the Adopt-A-Student Program and Research Fellowship Endowment have been key to facilitating my studies and research at FHL. If you’d like to support other students, please click one of those funds.

Olivia Graham is a PhD candidate in Drew Harvell’s lab at Cornell University, though she’s fortunate enough to spend much of her time at FHL. Olivia began studying at FHL in 2014, first focusing on sand lance and now on seagrasses. You can follow along on her marine adventures via Twitter: @o_jgraham.