For more than a decade starting in 2006, the Ken Sebens lab collected data on the distribution and abundance (i.e., ecology) of more than 200 taxa across depths at several sites in the San Juan Islands. After thousands of hours of photo analysis, the results are in: a database with millions of entries revealing the associations of hundreds of organisms interacting in a mosaic of patchy habitats. These interactions are driven by an even more complex symphony of ecological variables ranging from abiotic factors such as temperature, light regime and currents, to biotic factors such as facilitation, predation and competition. Yet, you don’t have to look at thousands of photographs for an undeniable pattern to emerge: a lot of pink versus a lot of orange (Figure 1).

Playing the role of ‘pink’ in this undersea photoshoot is crustose coralline algae, or CCA for short. CCA are red algae with a hard, calcareous shell that encrust the substrate and help maintain a complex reef surface. The larvae of many reef organisms worldwide use CCA as a cue to settle and grow on that substrate. The ‘orange’ character is played by the social ascidian Metandrocarpa taylori. Although usually less than one centimeter in height, they belong to phylum Chordata, which makes them closer relatives to humans than most of their rocky reef counterparts. Metandrocarpa spend much of their time siphoning water to capture small particles of food, and any individual can reproduce either by themselves or by fertilizing a nearby friend. It certainly isn’t as simple as just pink versus orange, of course. There’s a lot going on in every square meter of space, but since these two often find themselves at opposite ends of the habitat spectrum, they give us predictive capabilities in an otherwise chaotic seascape.

During a period known as the Fraser glaciation event some 18,000-15,000 years ago, channels between our islands were deepened and scoured by the advancing glacier, leaving submerged vertical walls and sloping ledges associated with the shorelines and submerged rocky outcrops throughout the region. Some of the strongest tidal currents in the world flow past these features, helping to support the diverse algal and invertebrate communities throughout the Salish Sea. For this long-term monitoring effort, divers captured photographs every year at three-meter depth intervals from 3 to 27 meters deep x seven sites, for a total of 60 transect locations and more than 3300 annual photos (Figure 2). 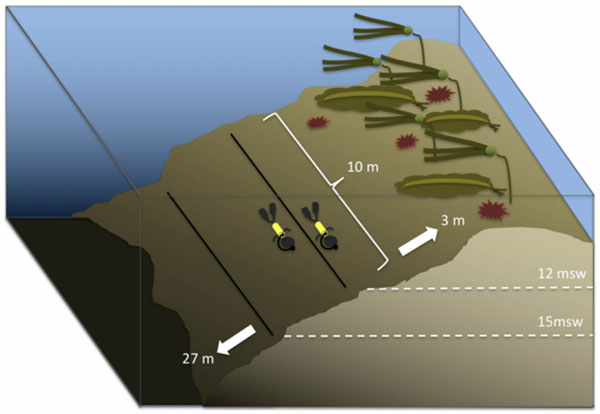 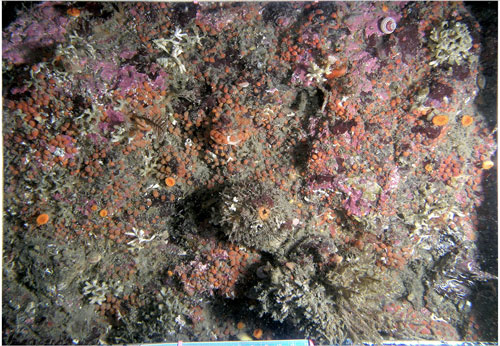 Each photograph has a unique file name that represents its snapshot in space and time: the site, year, depth, photo number, substrate orientation, and what analysis it is used for (Figure 3).

Despite inherent differences in the photos such as the year taken, site location, and substrate orientation, the same pattern emerged no matter how the samples were compared: depth is a strong ecological axis in determining community composition. In shallow water, large leafy brown seaweeds form a canopy similar to the trees in a rainforest, shading the understory communities on the substrate below. As you venture into deeper water, the macroalgae extend as deep as there is sufficient light for photosynthesis, then giving way to sessile and mobile invertebrates (sponges, bryozoans, sea cucumbers, etc.) as the most abundant community members (Figure 4). 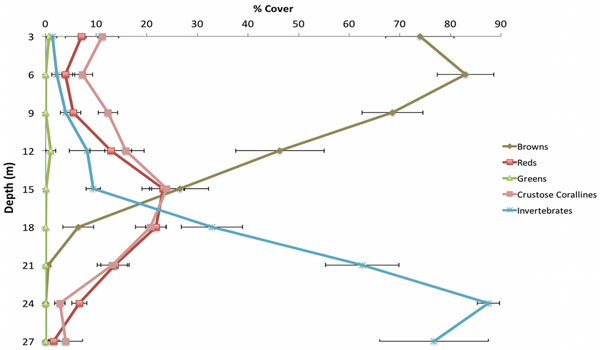 This pattern holds true for many temperate reefs globally, although the depths where you find transitions of these organisms may change dramatically due to water clarity (i.e., light availability). Surprisingly, ongoing analyses have provided little evidence of pattern in the mobile fauna (e.g. nudibranchs, snails, sea stars, etc), despite many being specialist feeders on attached invertebrates which did have patterns in their distribution.

This study encompasses multiple years, sites, and community components, and as such we anticipate that it will contribute to a better understanding of subtidal community patterns locally and provide comparisons globally for years to come, especially because we have barely scraped the surface of the massive underlying data set. We believe we have created a solid foundation for quantifying ecological change in our coastal oceans and its long-term consequences. 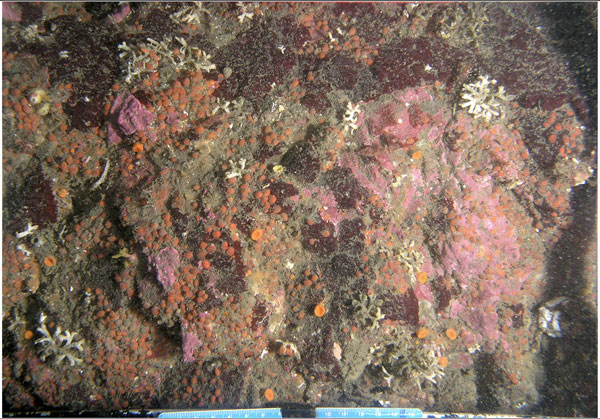 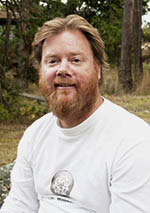 Derek first came to Friday Harbor Laboratories in 2006 for an American Academy of Underwater Sciences symposium. Rounding Brown Island on the ferry, he knew instantly he was going to live out his days on San Juan Island. He finished his PhD from the University of Washington's Biology department in 2018 and is now the President of the American Academy of Underwater Sciences.