In 2018, I donated a remarkable color map to Friday Harbor Labs called The San Juan Islands, Washington, by Roy D. McClellan. Here I'll describe the role that McClellan and other faculty and students in geology at UW have played in investigating the very challenging but intriguing bedrock that lies beneath the extensive veneer of softer, more easily erodible glacial deposits. 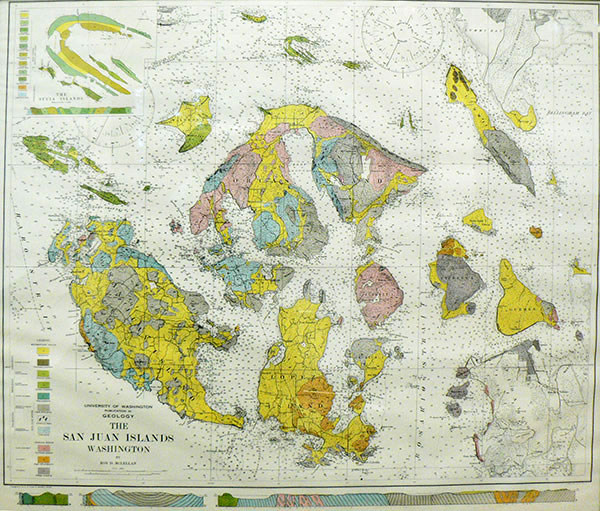 Geology of the San Juans 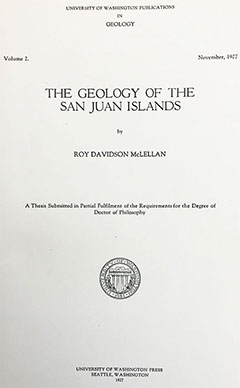 McLellan made his map as part of his PhD thesis, which was the first in geology at UW. UW Press published his thesis in 1927 as The Geology of the San Juan Islands. In the section on Descriptive Geology, McLellan defined several new formations: rock units that consist of distinctive rock types, which he differentiated from the Quaternary — largely glacial — sediments portrayed in yellow on his map (down below). A glance at the map shows that he seems to have visited every part of the archipelago. Someone once told me that he studied the extensive coastlines by row boat! I think his work in the field and in his thesis deserves to be called “monumental.”

McLellan provided descriptions of the rock types and rare fossils in each unit. The scarcity of fossils hampered anyone’s knowledge of the age of the rocks. His prose makes for delightful reading, because it conveys his frustration with interpreting or even describing what we still find to be complicated geology. Some of my favorite phrases include:

Page 156, “The structure of the region to the southeast of Mount Woolard is almost hopelessly complicated. The rocks of the Orcas and Leech River groups appear to be scrambled together in this district.”

Page 92, “…the cherty layers stand out in relief and present a surface and structure resembling that of shredded wheat.” I cite McLellan when I use “shredded wheat” to describe the rocks on the shore at Cattle Point, just below the concrete building, to my students and visiting geologists.

Perhaps McLellan's most prescient comment, from page 155: “A large part of the structural geology of this region will remain long unsolved…” Indeed, in 2020 we still have questions!

After about a 25-year hiatus in work by UW faculty and students on local bedrock geology, in the 1950s W.R. “Ted” Danner made an exhaustive study of rock units in northwestern Washington. He focused primarily on those containing limestone for his PhD thesis, completed in 1957. He probably visited even the most remote outcrops and quarries. In the San Juan Islands, limestone was economically important in the early 20th century: consider the quarries and kilns at Roche Harbor and Limestone Point. Perhaps Danner's most important discovery was the remarkable similarity of fossil fusulinids – marine foraminifera that lived in the Permian Period about 270 to 250 million years ago – to the same protozoans found in rocks of the same age in Japan. He might have been the first geologist to speculate on the “exotic” nature of this fauna, and raised the surprising possibility that the Permian rocks in the San Juans and Northwest Cascades had travelled thousands of kilometers from where they were originally deposited, bringing these fossils with them. Danner later became a professor at the University of British Columbia. In the 1960s, UW professor Joseph Vance began geologic mapping and studies of the bedrock on Orcas and San Juan islands. He supervised graduate student research and brought field courses there to learn geologic mapping.

I arrived at UW as an assistant professor after a short career as an exploration geologist in the Alaska Division of Shell Oil Company, in August 1974. Before Autumn Quarter began, I visited UW Professor John Whetten’s field class for majors and non-majors at Camp Nor’wester, then on the Sperry Peninsula on Lopez Island. I was struck by the similarity of some of the rocks on Lopez to rocks I had studied in California and Alaska. In 1975 Whetten and Vance each published papers, based on their own geologic mapping, in a Washington Department of Ecology Water Supply Bulletin. They compiled a new color map of the islands, the first since McLellan’s. The names, ages, and colors have changed from the 1927 to the 1975 map, but the overall disposition of rock units is similar: a credit to McLellan’s perceptive mapping. 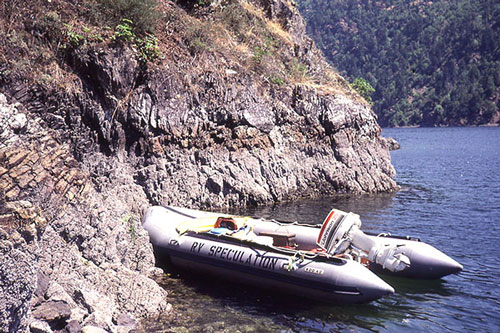 Whetten kindly showed me other outcrops in the islands, and in 1976 I began a multi-year study of the bedrock in the archipelago. Whetten, Vance and I supervised many UW Masters and PhD students in the late 1970s and early 1980s. I apologize if I have left out students but do certainly recall: Mark Brandon, Paul Carroll, John Garver, Bill Glassley and Sam Johnson. We accomplished much of our work, reprising McLellan’s and navigating the coastlines, in our trusty Zodiac the R/V Speculation . We stayed in dorms at the Labs, which I must say were pretty rustic compared to the relative luxury of accommodations today. By 1988 Brandon, Cowan, and Vance were able to publish a paper summarizing the geological mapping and geochemical and isotopic data that illuminated the origin and ages of the rock units.

What had changed from the pioneering works of McLellan and Danner? Plate tectonics! We are now comfortable with the idea of mobility of the Earth’s crust: rocks can move! The complex rock units in the San Juan Islands were assembled into a collage about 100 million years ago. A key debate still remains centering on where this collage originated. One hypothesis favors that these events occurred about 3000 km (1864 mi) south; the assembled rock units were transported all the way up the coast of western North America to their present home by 60 million years ago. I leave this tantalizing possibility for you to ponder.