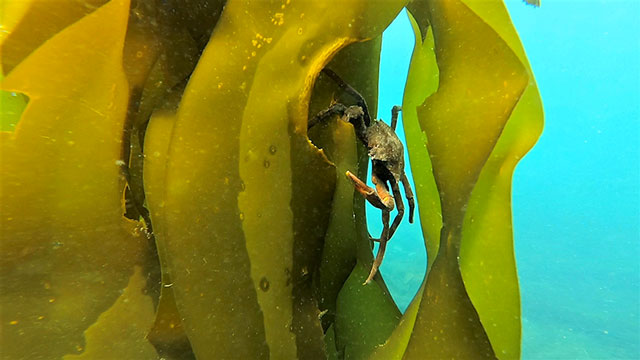 Katie Dobkowski is a visiting assistant professor at Bates College in Lewiston, Maine and a mentor in the FHL summer REU program. She earned her PhD from the University of Washington in 2017 and has conducted research at FHL since taking the Marine Algae course in Summer 2010. She received funding from the Bates Faculty Development Fund and the Friday Harbor Labs Dudley Fellowship.

James Calhoon is a senior at Bates College studying Biology and Economics; he likes to surf and play guitar. James spent this past summer at FHL researching the feeding preferences of urchins. He received funding from the Bates Environmental Internship and Bates Student Research Fund and from the FHL REU program.

Katrina Johnson is a senior at Bates College, studying Biology and Chemistry, who spent the summer of 2020 at FHL and has a profound love of orcas. She received funds from the Bates Hoffman Fellowship and the FHL REU program.

Muriel Dittrich is a senior at the University of Alaska Southeast studying Marine Biology. Muriel was an REU at FHL during the summer of 2020 and she likes to go crabbing and explore kelp forests.

We were very fortunate to be able to travel to FHL to conduct research during the summer of 2020 in spite of the COVID-19 pandemic and are exceedingly grateful to all of the FHL faculty (including the REU program coordinators, Stacy Farina and Adam Summers) and staff who made this opportunity possible. The four of us quarantined for two weeks, got COVID tests, and then formed a summer research “pod,” with the students sharing a cottage (and sometimes cooking duties!) while living and working at FHL. When they were not in the lab or out snorkeling, Katie introduced the rest of her pod to the delights of takeout from San Juan Island bakeries.

Bull kelp (Nereocystis luetkeana) is a major primary producer and crucial habitat for other economically and ecologically important species. Its distribution and abundance are changing in some parts of the Salish Sea as well as other parts of its broad range, from Alaska to central California. While multiple factors might cause these shifts, effects of herbivory and of competition from a non-native (but often increasingly abundant) species of seaweed (wireweed, Sargassum muticum) may be contributing factors. In our summer research we investigated relationships between native bull kelp (N. luetkeana), non-native wireweed (S. muticum), and a variety of herbivores. Our pod used a combination of laboratory experiments and field surveys (via snorkel!) to begin to understand the ecological relevance of interactions between and among these species in our region of the Salish Sea.

In the Salish Sea, red sea urchins (Mesocentrotus franciscanus) are influential herbivores in subtidal ecosystems. They consume a variety of macroalgae but often prefer bull kelp. These urchins play a vital role in regulating the macroalgal community composition, however wireweed has also become an influential presence in the ecosystem, possibly competing with local macroalgal species. It has not yet been established how the presence of the wireweed affects the feeding behavior of red sea urchins and if they will consume this common, but non-native, species. In our study, James investigated this relationship by running feeding trials with the urchins to examine their feeding behavior when offered bull kelp and/or wireweed in choice (both foods together) and no-choice (single food option) experiments. The urchins preferred to feed on the bull kelp, but when only offered wireweed, they were ‘willing’ to consume it. If wireweed continues to spread throughout the Salish Sea, the feeding preferences of red sea urchins for bull kelp could compound the effects of competition between bull kelp and wireweed, adversely affecting our local foundation species.

Our quest in understanding the relationship between herbivores, bull kelp and wireweed continued with the study of graceful kelp crabs ( Pugettia gracilis, Figure 1). Katrina’s research involved running laboratory experiments to examine the feeding preferences of these crabs. By offering bull kelp, wireweed, or both to kelp crabs, we were able to observe a preference towards bull kelp. However, Katrina found that graceful kelp crabs could consume the same amount of wireweed as bull kelp when no other food option was available. 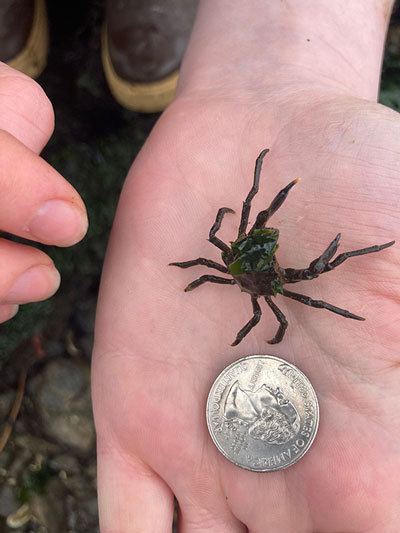 Fig. 1: A graceful kelp crab (Pugettia gracilis), the species used in experiments by Katrina (the carapace is smaller than a quarter!).

Because wireweed is an invasive species in the Salish Sea and seems to be thriving with increasing ocean temperatures (Wang et al. 2019), we were intrigued by the prospect of understanding how warming water temperatures may affect the feeding preferences or quantities of graceful kelp crabs. Currently, we are conducting additional feeding trials (gently heating the water in aquaria holding kelp crabs, feeding them bull kelp, and calculating feeding rates) in an attempt to answer this question.

To continue to gain an understanding of the relationship between herbivores and bull kelp, feeding trials were also conducted on the larger northern kelp crab (Pugettia producta, Figure 2). Katie had previously run laboratory experiments suggesting a strong preference by these crabs for bull kelp over other food types. Muriel’s research used laboratory feeding trials to delve deeper in this preference and see if the Northern kelp crab showed a preference in consuming different parts of bull kelp – the vegetative blade or the reproductive patches on the blades called sori. She found consistent results in both no-choice experiments – where the crab was given either just vegetative blade or sori – and choice experiments where both sori and vegetative blade were present: the Northern kelp crab, on average, consumed three times more sori than vegetative blade. In the field, this preference for reproductive tissue could lower an individual kelp’s reproductive success, and thus may have important implications for future restoration and conservation of bull kelp beds in the Salish Sea.

After all the time spent conducting laboratory feeding experiments, we also snorkeled at several sites on San Juan Island to complete surveys of bull kelp density and kelp crab abundance: Eagle Cove, Deadman’s Bay, and Cattle Point. At each of these sites we counted densities of bull kelp plants as well as ‘roving snorkeler’ counts of the abundance of Northern and graceful kelp crabs and their locations (e.g., on bull kelp stipes versus blades). We found that the numbers of kelp and crabs were similar between sites, and that Northern kelp crabs seem to prefer to spend time near the blades of the bull kelp (Figure 2), which makes sense based on their preference for eating them in the laboratory feeding experiments!

While many things about summer 2020 were different from a “normal” FHL field season – fewer classes and visiting researchers, no Invertebrate Ball – the sense of community that makes FHL so special remained, and our entire “pod” had a fun and productive summer.