Visitors to UW Friday Harbor Labs in the last nine months – or those perusing our website, which is easier these days – have seen a sweet new research vessel at our dock. The story of this boat acquisition includes tragedy, drama, history, philanthropy, a lot of luck, and a happy ending! 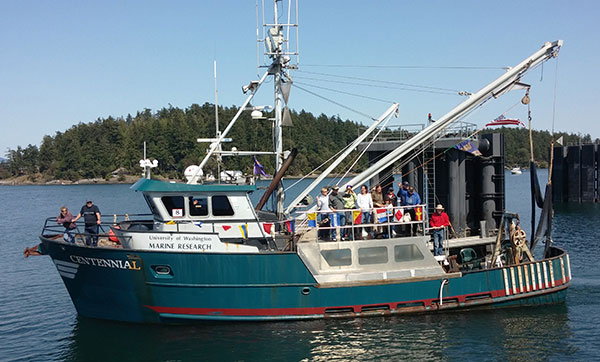 For almost 20 years, FHL’s research vessel was the R/V Centennial, bought and modified with funding from the Murdock Foundation and given its name because we took possession of it close to FHL’s 100 th year. It had been an Alaskan seiner commissioned and operated by Captain Mark Anderson, and we were able to hire him to remodel it with research in mind. He operated it at FHL for many years and in the process, trained FHL staff to take over this work when he eventually returned to fishing. The boat served us beautifully, both for collecting trips for classes and local researchers and for research trips into Hood Canal and the outer coast of Washington. But as all boat owners know, they are simply a “hole in the water you pour money into” and for a large 58-footer like Centennial, charging a high enough rate to actually cover all its expenses would have made it too expensive for many users to actually charter. As the boat aged, her maintenance needs amplified.

The ‘tragedy’ part of this story occurred on July 9, 2019, when R/V Centennial’s engine room filled with water at its mooring at the FHL dock. We still don’t know what happened and this is now water under the bridge (or into the engine…) but the result was that the mechanical and electrical components below deck were totaled. Then began the drama! A lot of soul-searching among FHL staff and gathering input from past users and FHL donors about “where do we go from here” followed. Luckily, we have a lot of thoughtful ‘boaty people’ who were willing to donate time to brainstorm about issues like “do we really need a boat this large?” and “what kind of research might we do in the future that requires a big boat?” 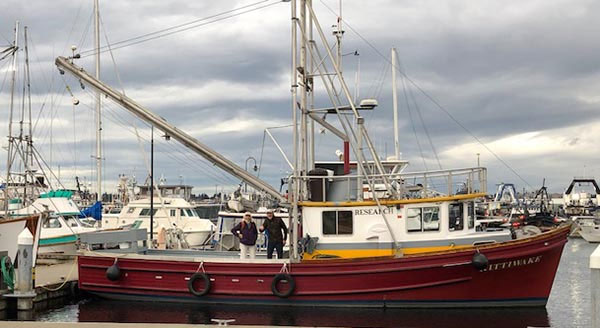 The first step of the ‘luck’ part came when our former vessel skipper David Duggins got an email from an old friend and colleague Charlie Eaton, saying that Charlie was selling his Seattle-based research vessel, Kittiwake. The ‘history’ part of this tale: Charlie had done a master’s degree at UW and spent many years at FHL as a marine technologist. He eventually moved to Seattle, designed and built the 42-foot Kittiwake, and ran it as a Salish Sea research boat for decades. But he was ready to retire and wanted to sell the boat. Research vessels are kind of a niche market and it had not been snapped up despite being in immaculate condition. He told us that he’d be willing to not only give FHL a special deal on the price, but throw in 40 hours of training in its care and feeding for FHL crew: an amazing offer.

Then came the philanthropy part! Our research vessel budget was already in the red, so we had to raise all the funds for the purchase of Kittiwake, and we did. FHL has a remarkable cadre of generous donors, including alumni who love boats – and others who don’t necessarily care about boats, but recognized that a marine lab has to have a boat, and helped out for the good of the Labs. 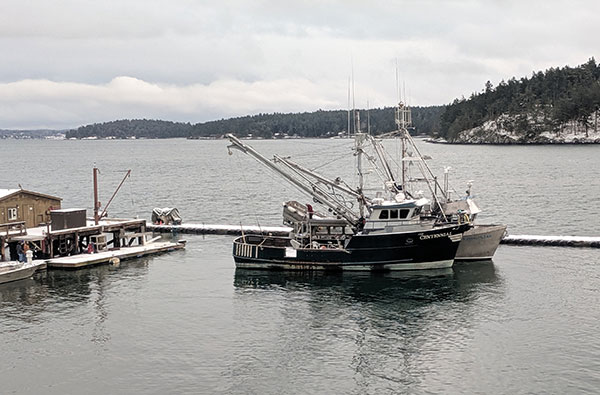 Lucky part #2 came over the course of Fall 2019 as we worked with UW Surplus to put the Centennial up for auction, and it finally went on the bidding block in late December 2019. To our vast delight, there were a number of regional fishermen who recognized its value as a well-built vessel that could be refurbished and put back into the fleet, and it wound up selling for far more than the original pessimistic marine surveyor had estimated. This meant that not only could we pay off the prior boat debt, but had some extra funds to do a bit of refurbishing on R/V Kittiwake to adapt it to our needs. On a snowy day in January, the new owners of Centennial came and towed her away – we were sad to see it go, it had served us long and well!

The final chapter of this story started when Charlie Eaton, helped by David, brought the R/V Kittiwake north from Ballard in May 2020. Over the course of the winter we had hired two new boat captains, Jakob Bueche and Marshall Davis. In another bit of history, Jakob had fished with Captain Mark, tying together our boat community! The new captains and other local staff spent much of a week taking Charlie up on his training offer, learning Kittiwake's basic operations plus the methods for critter collecting that comprise much of the Labs’ local research needs. Marshall operated the boat through the summer, successfully taking our in-person (COVID cautious) classes out to collect fishes and other organisms, as well as doing some contract work out of Everett.

When Jakob returned from a last summer job in Alaska, he went right to work using his marine engineering skills to get various pieces of high-tech equipment adapted for use on the R/V Kittiwake for the Autumn research apprenticeship Pelagic Ecosystem Function. This amazing class uses the boat for weekly sampling efforts; in some other Tide Bite we will describe their remarkable long-term dataset on local oceanography, fishes, and marine birds and mammals.

So, our boat-swapping saga turned out well in the end; and you can see from the photos that Kittiwake is a lovely boat, making a bright spot of color on these grey winter days! 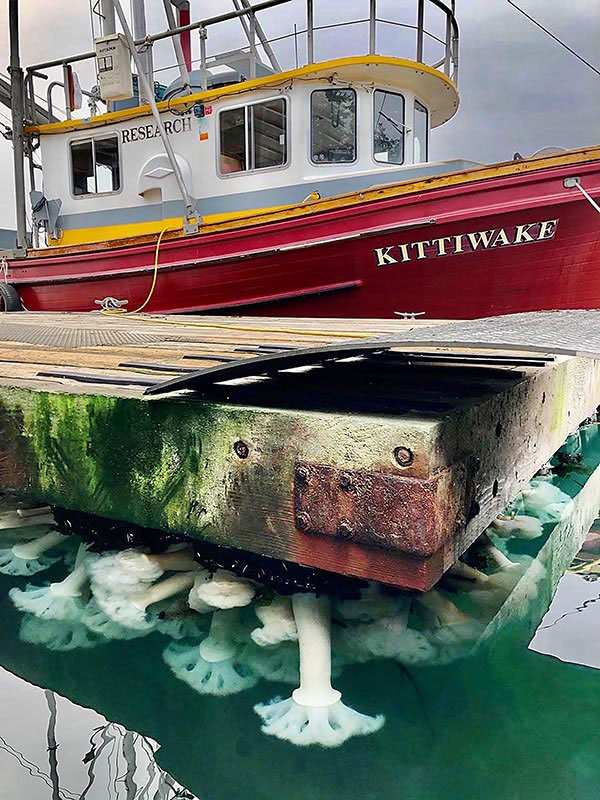 Photo credit: Kathy Ballard, based on a concept by Arial Brewer.