Among the world's hundreds of types of known starfish (or seastars as I'll call them), our Pacific coast sunflower stars are true record breakers. They are the largest seastar in the world, with an arm-tip-to-arm-tip "wingspan" of more than two feet when fully grown. Using their thousands of tube feet, sunflower stars can glide a hundred-yard dash in under an hour; certainly bronze medal speed at least! They're well known to ocean lovers for their brilliant colors, and to marine biologists for the fear they invoke in their many types of prey. Contact with a sunflower star will cause seafloor species – such as scallops and sea cucumbers – to defy their reputation as sedentary creatures and swim, in a desperate attempt to escape the clutches of the star's 21+ arms. 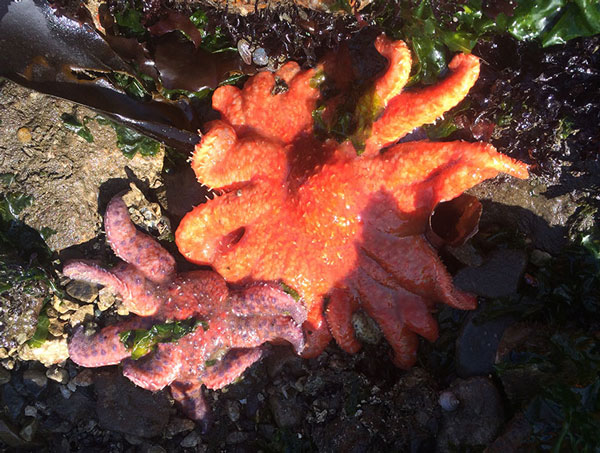 Sunflower stars found by Richard Emlet in the intertidal on San Juan Island, July 2019. The smaller one (about 5 inch diameter) was below our target size for collecting; the larger orange one is in our colony and is named Níspero, the Spanish word for Loquat. Credit: J. Hodin.

Sunflower star adultsRecently, sunflower stars (Pycnopodia helianthoides) broke another record, but one less worthy of celebration: of the dozens of west coast seastar species impacted by a mysterious syndrome known as seastar wasting disease, sunflower stars were hit the hardest. Starting about 8 years ago, sunflower star populations up and down the coast started to plummet, with the syndrome turning these majestic beasts into piles of goo. They have now all but disappeared from the southern part of their former range, and their numbers in our area and further north are drastically reduced. This calamity led the International Union for the Conservation of Nature to include the species in its latest "red list" of endangered species, the first such listing for any seastar.

Like wolves and sharks, sunflower stars are top tier predators and over the past 50 years, scientists have come to realize just how important such predators are to thriving ecosystems. In the mid 1960s, University of Washington zoology professor Bob Paine first identified predatory seastars as the so-called "keystone species" in certain seafloor habitats: remove the keystone and the stable structure of the ecosystem falls apart. With the recent disappearance of sunflower stars in Northern California, we have seen this process play out in shockingly dramatic fashion. Coincident with the seastar declines, populations of one of their favored prey – the purple sea urchin – have exploded, and the unchecked urchins have in turn, clearcut the once mighty forests of coastal kelp, already stressed from warming waters. At latest count, kelp in that region has been reduced to a mere 5-10 percent of its former numbers. Kelp forests are well named: they are truly the rain forests of the ocean, providing crucial habitat for countless species of algae, fish and invertebrates, buffering the coasts from storms and mitigating climate change. Current conditions are dire.

Sunflower star larvaeSo what are we to do about it? For one, we can try returning the sunflower star to California waters in the hope that they can help restore the previous balance. With this long-term goal in mind and with generous support from The Nature Conservancy of California, I have spent the last two years developing a captive breeding program for sunflower stars at Friday Harbor Labs.

This has turned out to be more challenging than it first appeared. While humans have mastered the art of growing all sorts of sea creatures for our consumption, we don't eat seastars. That is the likely explanation for why we know so little about the life cycle of sunflower stars. At what precise time of year do they breed? How long do their microscopic larvae float in the plankton before they are ready to transform into juveniles? What triggers this transformation? What conditions do the resulting tiny juveniles – about the size of a poppy seed – need to survive, and what do they eat? How long does it take them to grow until they can themselves reproduce? 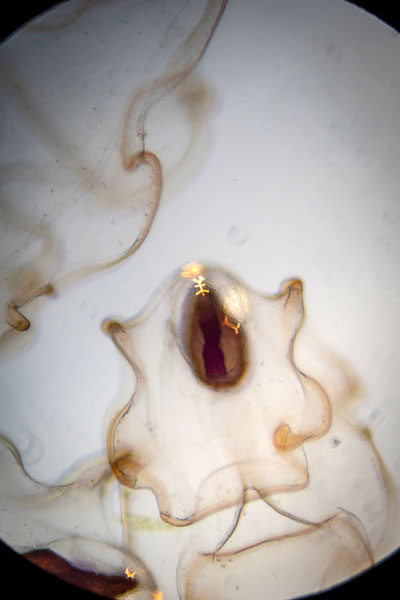 Sunflower seastar larvae born in mid-January 2021, seen under a microscope. The dark oval is a stomach. Polarized light reveals a glowing, branch-like shape, which is the start of the sea star’s adult skeleton. Credit: D. Wise / University of Washington.

Sunflower star juvenileI can now humbly say that it truly takes a village to raise a seastar, and to begin to answer the questions above. In addition to the expert assistance I've received from Pema Kitaeff and former FHL undergraduate students Alexi Pearson-Lund, Shannon Cefalu and Fleur Anteau, numerous visiting and resident scientists and staff here have aided in the search for adults above and below the surface, and have stepped up to help when we needed an extra arm. The pandemic threw us a curveball, and during that time I moved the project to Seattle, where I was in quarantine. Big props to friends of FHL in Seattle including Carolyn Friedman, Evelyn Lessard, Jacqueline Padilla-Gamiño and the UW Biology department and its intrepid building managers for making that all work. Now back at FHL, our first batch of juveniles just celebrated their first birthday (or perhaps "re-birthday" since I'm counting from metamorphosis), and the largest one is nearing three inches in wingspan! Our second round of offspring have just started their post-metamorphic journey, and our hands are currently full attending to all the new mouths to feed! We're looking for additional funds to hire more help to join the team this summer. 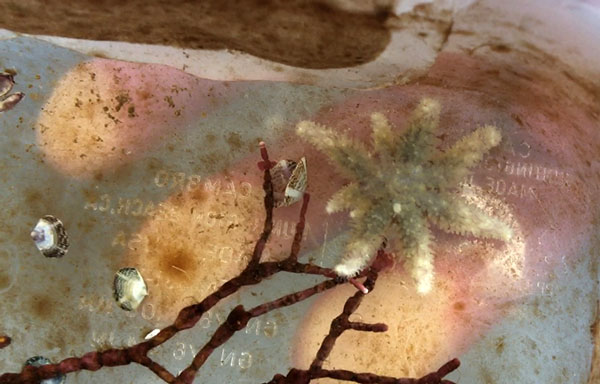 A roughly one-year-old juvenile sunflower sea star crawling across the bottom of a container in the lab, shown with human fingertips underneath for scale. As these juveniles grow, they will acquire more arms and different colors. More than a dozen juveniles including this one represent the first successful round of captive breeding of the species at UW Friday Harbor Laboratories in collaboration with The Nature Conservancy. Credit: K. Taguchi / University of Washington.

When I think back over the past two years, I count myself honored to have been there to witness some incredible sunflower star life events: the thin membrane rise around the egg that denotes successful fertilization, the graceful arms of the microscopic larvae waving in the water column, their breathtaking transformation to juveniles, initial steps on their brand new tube feet, their behaviors becoming ever more adult-like as the year progressed, their first meal of solid food when they swallowed baby clams and then spit out the empty shells, and seeing the first one in the batch form a sixth arm (they start with five and they form new arms three different ways – another seastar record!).

To give endangered sunflower stars their best chance of recovery, we can all join the effort to help remove stresses on coastal ecosystems – from watershed pollution, to overfishing, to reducing our dependence on oil. And while that path to recovery remains uncertain, one thing's for sure: the more we pay attention, the more profound and enlightening lessons the sunflower star will teach us.

Written by Jason Hodin, a Senior Research Scientist at Friday Harbor Labs. You can donate to his sunflower star captive rearing effort at the UW Giving campaign Stars for the Sea.