Disappearance of eelgrass ( Zostera marina) might seem like a trivial topic to some, but it is actually quite a concerning phenomenon. Marine organisms and humans alike rely on the multitude of ecosystem services provided by eelgrass, such as water filtration, erosion control, carbon storage, and habitat for cultural and commercially important species (Phillips 1984). Putting this in an economic context, it is estimated that one acre of eelgrass is worth $12,325 (Carlisle 2004). In other words, eelgrass decline is our canary in the coal mine; if not restored, further damage could lead to bigger issues.

In the San Juan Islands, eelgrass began to disappear at several sites in the early 2000s (Wyllie-Echeverria et al. 2003). This decline carried with it major environmental and economic costs for nearshore fisheries such as the loss of spawning sites for Pacific Herring, which impacted that fishery and deprived Chinook salmon of prey. By extension, the Southern Resident Killer Whale population was also affected due to declining Chinook salmon. Such a trophic cascade is unfortunately common when eelgrass populations begin to disappear (Phillips 1984).

It can be clearly seen that eelgrass is a vital component to both marine ecosystems and to human wellbeing and culture. Previous attempts at restoration have typically involved the harvest and relocation of adult plants. While effective in some scenarios, this practice is time consuming, costly, and is not effective for large scale restoration programs (Marion and Orth 2010). The question is, what can be done to restore eelgrass beds throughout the Salish Sea in a cost effective and ecologically efficient way?

To understand how large-scale restoration might be achieved, it is vital to understand eelgrass itself. Much like annual bluegrass, eelgrass is a flowering plant. In the spring, eelgrass flowering stalks begin developing. As the weather warms, males release their pollen to fertilize females and seed development begins (Figure 1). When seeds are mature they are released in late summer and early fall (Phillips 1984). 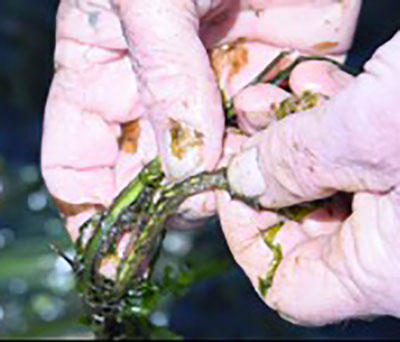 Released seeds have many dispersion pathways. They can drop to the sediment close to the parent plant, be transported via an uprooted flowering stalk to a more distant location, carried by waterfowl, or transported by gas bubbles (Pickerell et al. 2005). Once released, seeds must reach the seafloor in a suitable environment in order to germinate. This commonly happens in early spring and if conditions are right, after germination seedlings begin to grow and clonally spread in their new environment (Phillips 1984).

Scientists realized that dispersal of seeds into areas where eelgrass had disappeared could be a promising, simpler and more cost-effective ecological restoration method than transplanting adults. This method involves harvesting flowering stalks before seed release, and spreading seeds in submerged habitat previously occupied by eelgrass. Over time, this restoration practice resulted in eelgrass return at some experimental sites (Marion and Orth 2010, Boyer and Wyllie-Echeverria 2010).

Seeing the declining state of the eelgrass population in the San Juan Archipelago, researchers from the San Juan Islands Conservation District and Friday Harbor Laboratories would not sit idle. The tell-tale symptoms of suffering beds such as reduction and disappearance of Pacific herring spawn were present, putting biodiversity and productivity at stake. A pilot study was launched in the summer of 2020 to attempt to restore the eelgrass using seeds, trying out methods at several sites where eelgrass used to be abundant but is now gone or declining. 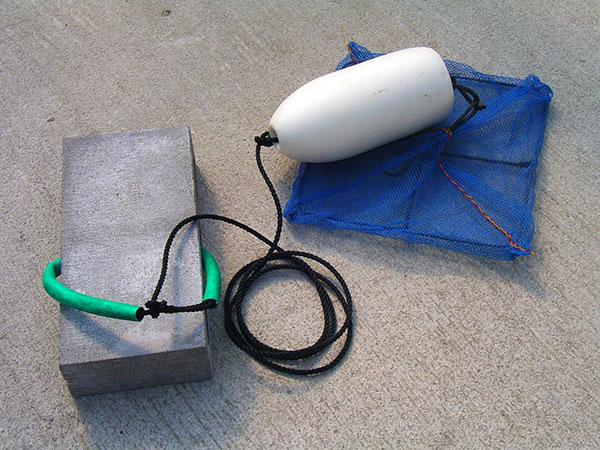 Fig. 2: Components of the BuDS assembly.

The first method, BuDS, involves collecting flowering shoots and placing them in a pearl net below a buoy anchored at the restoration site. Shoots were harvested in June 2020, transported to restoration sites on the same day, and placed in the BuDS array (Figure 2). For this treatment, it is estimated that 595 seeds were released at Westcott Bay and 720 at Blind Bay.

In the second method, broadcast seeding, the seeds are spread by a person instead of being dispersed from the flowering shoot in a buoy array. Flowering shoots were harvested in June and July 2020 from multiple locations within collection sites to ensure no one location experienced a reduction in localized seed production. These shoots were kept in a culture system until seeds were released. After release, seeds were collected and broadcast by hand at restoration sites in Blind Bay and Bell Point, Westcott Bay in October 2020 (Figure 3). 2,950 seeds were broadcast at each restoration site. 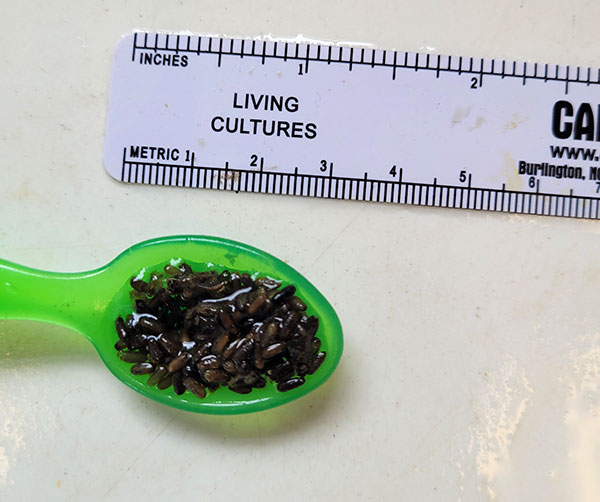 The third method, germinated seeds and young seedlings (GSYS), was developed for this project and involves culturing eelgrass seedlings at Friday Harbor Laboratories and transplanting them directly at the restoration site. The GSYS treatment was transferred to frames containing sediment from an existing eelgrass tank (see Figure 4) and planted by a free diver at Bell Point (Figure 5). Specific locations for BuDS seed broadcasting and transplanting were chosen by reviewing the history of previous eelgrass cover as well as the historic presence of herring spawning at sites in Westcott Bay and Blind Bay. In total, 3,627 germinated seeds and young seedlings were planted. 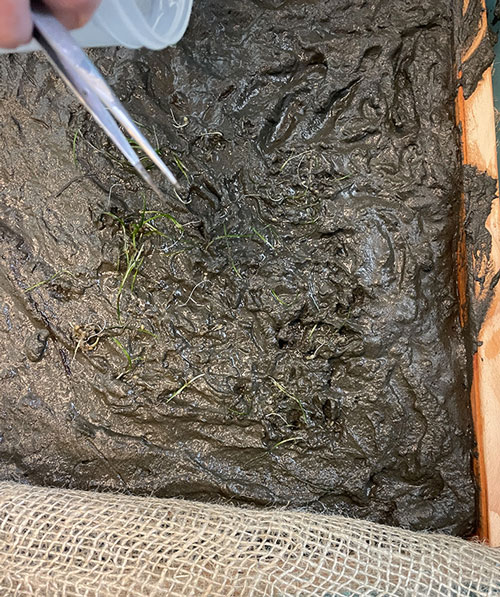 Fig. 4: Young seedlings planted in a GSYS frame before transfer to the restoration site. 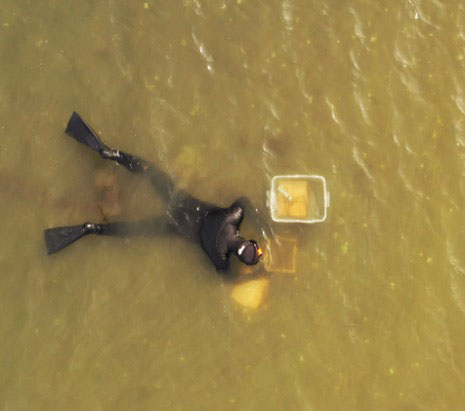 On 30 April 2021, the research team found seedlings along the seed-broadcast transect (Figure 6) and within several GSYS treatments. As Dr. Wyllie-Echeverria remarked “A truly exciting experience for me! It is possible that the seedlings along the transect could have grown from seeds transported from a distant site, but this scenario is unlikely. In my mind’s eye, I see the young, green leaves lying on the exposed, moist, sediment along a transect where I broadcast seeds into the water in October.” 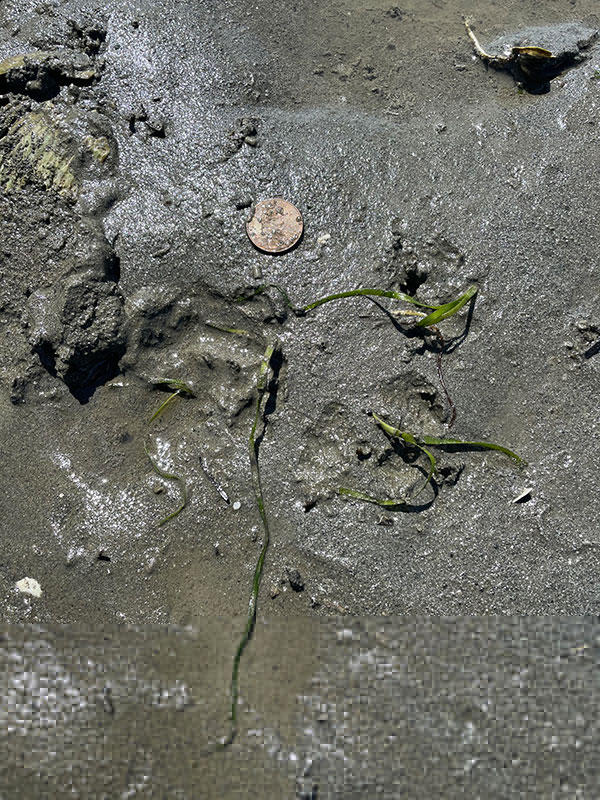 Thanks to Isabella Brown, Tom Cogan, Ryley Crow, Eric Eisenhardt, Logen Flem, Sherrie and Savannah House, Sean O’Connell, Yuki Wilmerding, Sylvia Yang, and Andy Zall for help with field work and Chris David Williams for the GIS images. We would also like to thank the Seacology foundation and the Salmon Recovery Funding Board for funding this project.

Phillips R.C. 1984. The ecology of eelgrass meadows of the Pacific Northwest: a community profile.