My family and I arrived at Friday Harbor Labs on June 26, 2021, just before Seattle recorded its hottest day on record (42°C or 108°F at Sea-Tac on June 28). We came to study coastal fog and potential climate refugia, and we felt like climate refugees ourselves. The FHL main weather station peaked at 35°C (95°F) on the 28th: still hot but nowhere near as bad. However, we did not see fog that weekend, and the relatively cooler temperatures were still too hot for many marine organisms around the Salish Sea.

Fog is a cloud that extends to the ground and forms when air temperature either cools or moistens enough that it cannot hold more water vapor and droplets form. This is called the dew point temperature because at this temperature we see dew on the ground. The most common form is radiation fog, which forms from near-surface air temperatures cooling on clear nights. Because moist air is less dense than dry air, a capping inversion (where air temperatures increase with height) is required to keep the fog at the surface. Inversions are associated with high pressure and sinking air, both of which are common along the western U.S. in the summer.

Marine and coastal fog add an extra layer of complexity, as fog can form by increasing the moisture content of the air from evaporation (latent heat flux) from the ocean. Fog can also form from cooling the already moist air from below, which occurs over cold sea surface temperatures associated with the upwelling of colder, deeper water to the surface. The persistent summer fog along the California and Oregon coast is associated with the strong ocean upwelling and consistent high atmospheric pressure leading to a capping inversion over a layer of cool, moist air.

In the Salish Sea and around FHL, these ingredients combine to create more variable and, in my opinion, more beautiful fog. Air temperature fluctuates with the solar cycle, so fog is most common just before dawn, but around the San Juan Islands, surface currents and upwelling are forced by the tides. Rising tides not only bring in colder surface water from the Strait of Juan de Fuca but also, through strong currents over narrow sills, generate upwelling of colder water from below. Thus, fog is more likely at times of rising tides and at locations of current-driven upwelling. Fog that forms over this cold water can also be advected by the breeze from one location to another.

Fig. 1: (left) Camera deployed in a tree near Cattle Point, taking photos toward Lopez Island. (right) Map of locations referred to in other graphics.

To learn more about how these processes play out across San Juan Island as large-scale weather patterns change, we deployed time-lapse cameras (Figure 1) and self-recording temperature and relative humidity sensors at multiple locations at FHL, at False Bay, and on the property of many friends of the Labs who kindly shared their trees and coastal views. Figure 2 illustrates fog breaking up across the island as documented by four cameras on the morning of 28 July 2021. The Mt. Dallas site above the fog has about half the relative humidity and over 10°C warmer temperatures in the morning (Figure 3). The temperature records also reveal that the sites with the longest lasting fog stay cooler throughout the day. 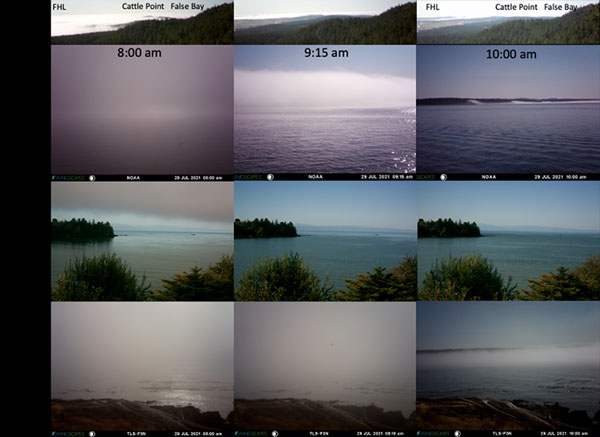 Fig. 2: Sequence of images from 29 July 2021 taken at 8, 9:15 and 10 a.m. local time (columns represent the same time), from four locations on San Juan Island (rows show the same location). The top row is the view from the top of Mt. Dallas, looking down on the other three locations as marked. At False Bay, the fog layer lifts from the surface at 8 a.m., due to the surface layer becoming too warm for fog. At both Friday Harbor Lab (FHL) and Cattle Point, the fog layer disappears from the top, due to the entrainment of dry air from aloft. Viewable from FHL, the fog lasts longer on the far side of Shaw Island and looks like a waterfall as it is advected from one side of Shaw to the other.

Over the upcoming months, we will be analyzing the data for the entire summer in the context of larger scale atmospheric circulation patterns and satellite imagery to better understand the physics behind the fog patterns and how and why they vary in space and time.

This physical understanding will help answer the larger question of whether coastal fog is likely to become more or less common as the climate changes. Warmer air can hold more moisture without forming fog, which might make it less common. However, differences between air temperature and sea surface temperature are likely to increase as the air warms faster than the ocean, creating a larger gradient and greater rate of moisture transfer from the water to the air above, which might make fog more common.

We hypothesize that the dominant effect will vary with location, making some areas foggier and cooler, potentially serving as climate refugia. Identifying these locations can aid resource management decisions in upcoming years. 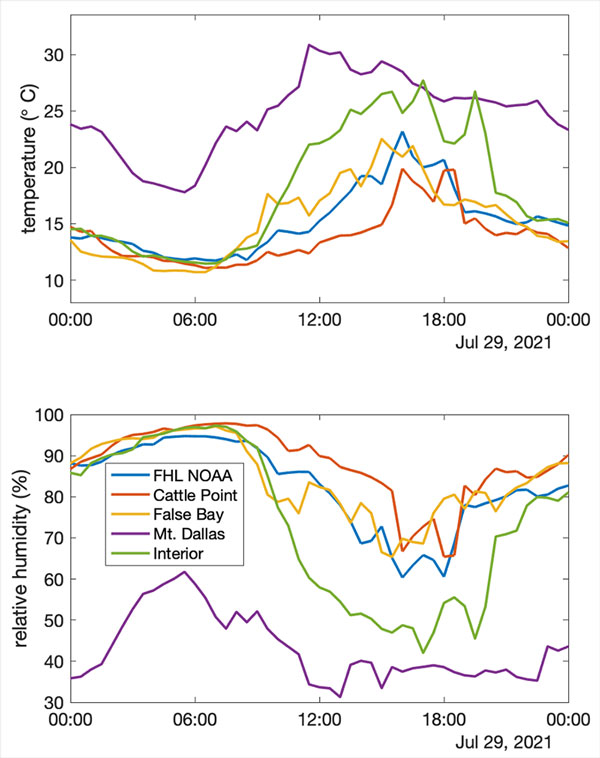 Fig. 3: Timeseries of temperature (top panel) and relative humidity (bottom panel) at the five locations shown on the map in Fig. 1, corresponding to the photographs shown in Fig. 2. Temp & humidity graphs

I would like to thank everyone at Friday Harbor Labs and in the greater San Juan Island community for their family-friendly policies (and for researchers with charismatic marine life in their labs, their science explanations and patience with repeat visitors) in this summer of limited childcare options. I would also like to thank everyone who welcomed me and my family onto their property to take measurements. We would not have this dataset without you.