This story begins at the Friday Harbor Laboratories, on a brand-new apartment deck overlooking Friday Harbor in summer 1963. An international crowd of scientists and a few of their grad students were invited by UC Santa Barbara ecologist Joe Connell on a Friday after work, for beer and chat. To me, a fresh graduate student with a physics background, it seemed a strange bunch and they talked about many things in biology and medicine that I knew nothing about. Although no one knew it then, a most important thing happened at that event. Joe suggested to one of the guests that the extraordinarily large local barnacles might be useful to physiologists. 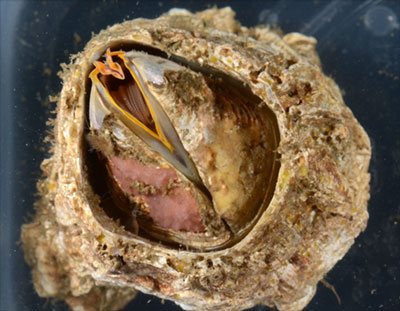 A center piece of this story, the barnacle Balanus nubilus (Darwin).

A relative of crabs, prawns and shrimp, there is a local barnacle species, Balanus nubilus, which grows to the size of a clenched fist. This unusually large barnacle is found on the Pacific Coast from Alaska to South America, but is rarely seen because they occur on rough, precipitous outcrops at – or more often below – the lowest tide. But they were known to occur on the jagged, rocky bottom of Peavine Pass on the nearby SE coast of Orcas Island, and could be obtained for researchers by Cleave Vandersluys with his Research Vessel Hydah, used by FHL in the 1960s.

Coincidentally, a check of Captain George Vancouver’s log reveals that he had anchored HMS Discovery at Strawberry Bay just 5 miles SE and sailed close by Peavine Pass on Monday June 11, 1792.

The “cluster of numerous islands, rocks and rocky islets” mentioned in the log are likely Peapod Rocks, adjacent to Peavine Pass. The bay where they had anchored is still called “Strawberry Bay” on modern charts. So just maybe, that is the origin of Darwin’s barnacle type-specimen.

Charles Darwin, like Joe Connell, was keenly interested in barnacles and published a lot about them. Shortly after he returned from his five-year world voyage which famously included five weeks in the Galapagos Islands 650 miles west of Ecuador, Darwin noticed a huge unfamiliar barnacle specimen in the London Museum that had originated on the Pacific Northwest coast of America and so published it as a new species, Balanus nubilus, in 1854.

There are two threads running here. The first originated when Vancouver, exploring the Pacific Northwest Coast may have snagged a barnacle or two on the anchor of HMS Discovery. Someone on board, likely the physician Archibald Menzies, also a skilled naturalist, noticed and preserved the barnacle. It then got back to a shelf at the British Museum in London where it collected dust for over 40 years until it was noticed by Charles Darwin.

Now back to Joe Connell and barnacles at FHL. By random chance, one of the visiting scientists at Joe’s event was an idiosyncratic, brash English neurophysiologist: Graham Hoyle, recently emigrated to University of Oregon from University College London. 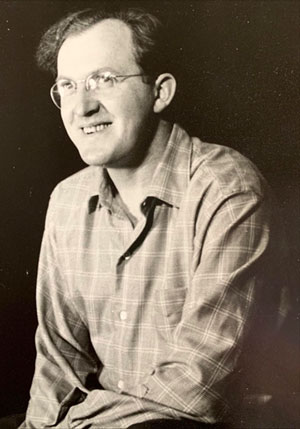 To Hoyle and to anyone who ever gave it a thought, it is remarkable that all muscle cells are tiny membrane-bound, spindle shaped bags containing structural and energy processing soup, and they can generate considerable force and shorten visibly when stimulated by nerves or an artificial electrical impulse. But something was aggravating to him and everyone else in the field of muscle physiology: the microscopic hair-like dimensions of most muscle cells made it extremely difficult to study how they shortened, even though this is an essential process for all multicellular animals.

Hoyle obtained a barnacle from one of Cleave’s collecting trips at Peavine Pass but was puzzled that the muscles appeared to be made up of clusters of slender membrane-bound “sausages,” each about the size and shape of a wooden matchstick. This stopped him in his tracks because these dimensions are vastly bigger than the hair-thin cells of muscles like ours and those of most other animals. So, he immediately wondered if those “sausages” might be individual muscle cells. If they were, their gigantic size might be supremely helpful in the search for how muscle cells work. But first an experiment was needed to figure out if each “sausage” was a bundle of closely packed hair-sized cells or what seemed less likely, just one huge cell.

In his lab, Hoyle pushed a microscopically sharp glass electrode, having tip dimensions comparable to the wavelength of visible light, through the surrounding membrane. After seeing an electrical change indicating his electrode had penetrated to the inside of the cell, he advanced it with a micromanipulator slowly a few millionths of a meter at a time, all the way through the “sausage” from first penetration until it popped out of the other side. He watched closely on an oscilloscope (a sensitive device to measure voltage between the inside and outside of the electrode tip) to see if the electrical response changed as the electrode tip passed in and out through successive adjacent cells packed together side to side (in-out-in-out-in, in-out, etc. until it finally popped out the far side of the bundle) or if the voltage remained steady while passing continuously through to the other side of one single cell (in-n-n-n-n-n-n…out). When he did that experiment, the steady electrical response confirmed later microscope observations: each matchstick-sized “sausage” was all just one very large muscle cell, the largest such cell ever found by anyone in any animal!

In summary, Joe Connell’s revelation to Hoyle of the giant barnacles first described by Charles Darwin, whose type-specimen may have been collected by George Vancouver’s crew near FHL, gave the observant physiologist Graham Hoyle a crucial tool. The biggest muscle cells in the animal kingdom then permitted breakthrough experiments with biomedical implications.

The rest of this story, including how it led to the Nobel Prize in chemistry for three scientists, please click here or go to https://tinyurl.com/DWillowsBook.

Enter a short text version of your image, for people who are unable to see it Aequorea victoria. These elegant medusas are the source of luminescent molecules crucial in the experiments that followed.

Claudia Mills has made a comprehensive and very useful timeline of FHL history at: https://faculty.washington.edu/cemills/FHLTimeline.html.

Dennis Willows was a FHL grad student (1963), post doc, faculty, Director and retired (2005). He lives in Friday Harbor and New Zealand with his wife, Nicole Phillips, also an FHL alum.