The essay below shows that at FHL we ‘do’ birds, too! At least two of our classes each year spend some time studying seabirds or sea-associated birds, like the kingfishers described below. These classes include the summer Marine Birds and Mammals class that the authors took in 2017, and the autumn Pelagic Ecosystem Function course that has birds as one of its focal groups. 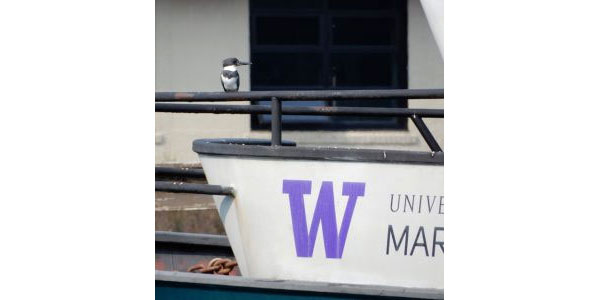 Sometimes these students gather data that are solid and novel enough to be publishable, although it takes extra energy and motivation to follow up on that process after the class is over and students return to their non-FHL lives. In this case, some of that energy was supplied by co-author Maria, who returned as teaching assistant in 2021. Kingfishers are wonderful charismatic birds and I think you’ll enjoy this essay! - Best, Dr. Megan Dethier FHL Director

WHAT THE BELTED KINGFISHER FAMILIES OF SAN JUAN ISLAND TAUGHT US

The high rattling call snapped our attention away from the seal carcass. A blue and white crested bird streaked over us and landed on a bleached piling sticking out above the calm water. The bird flew up and hovered in the air with its beak pointed down towards the water, and then set off in a startling dive straight into the ocean, emerging seconds later with a small fish in its beak. The fish thrashed wildly as the bird returned to its perch and subsequently began smashing its prey on the piling before swallowing it whole.

It was only week two of the Ecology and Conservation of Marine Birds and Mammals (MBM) class, and the Belted Kingfisher (Megaceryle alcyon) had already piqued our interest. When it was time to identify our topic of research for the class project, the three of us knew which species we wanted to spend time studying; we just needed to identify a research question. A quick literature review brought to light the lack of studies on these birds in marine environments. Unlike most freshwater ecosystems, the marine habitats of the Belted Kingfisher on San Juan Island are influenced by tidal activity. This guided the first two questions: (1) How did their behavior differ from Belted Kingfishers inhabiting freshwater? (2) How was their behavior and feeding success influenced by tidal effects? Our time at the Friday Harbor Labs coincided with the Belted Kingfisher post-fledging period. This allowed us to observe juveniles who were just learning how to catch fish for themselves, and guided our third and final question: (3) How did behavior, feeding success, and prey size differ between post-fledgling juveniles and adults?

With the help of our project mentor (and course T.A.) Dave Slager, we designed a study to help answer these research questions. Our study design included multiple daily observation periods to collect behavioral data at two study sites: Jackson Beach and the dock at FHL. To conduct focal observations, two of us assumed the role of observers and selected an individual kingfisher each via convenience sampling. While standing in one place, we observed the birds through the binoculars or the spotting scope for a duration of 5 minutes. Every 20 seconds the observers called out the behavior that the focal bird was engaged in; the third person would record these behaviors on a pre-made data sheet. The focal observations were repeated every 15 minutes. The behaviors on our data sheet were listed as follows: (1) Perched: inactive sitting and active perch-hunting; (2) Preening; (3) Flying, not including diving or hovering; (4) Shaking prey, during prey handling; (5) Diving, while hunting; (6) Feeding: active consumption of own prey and prey handling not involving shaking; (7) Provisioning: juvenile being fed or adult feeding juvenile, not including prey handling; (8) Hovering, while hunting; and (9) Chasing. We also recorded the number of strike attempts, noting whether each strike was successful (fish caught) or unsuccessful. We estimated the prey size using bill length as a visual ruler. All the prey we observed captured were small fishes. 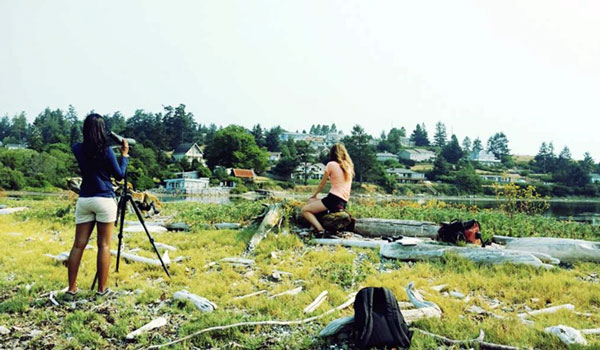 Although it was a short study, we dedicated so many hours of our day observing these birds that we quickly learned to sex them and identify individuals. By the end, we were able to identify all members of the two families that lived at each study site and couldn’t help but name them. At Friday Harbor we had Bobby Fisher and Carrie Fisher, with juveniles Hermione Granger, Luna Lovegood, Martha, and Stewart. At Jackson Beach we had Dad and Lilith, with juveniles Barbie, Einstein, Kelly and Jason Bourne.

After analyzing the data we found that the majority of observed adult and juvenile Belted Kingfisher behavior was non-flight-related (e.g., perching, preening, etc.), but juveniles spent significantly more time perched than adults. This finding showed parallels to studies of freshwater kingfishers, however the adults in our study spent more time prey handling than freshwater birds in a comparable study. This increased time spent prey handling may have reflected the parental demands on the adults. In terms of feeding behavior, both adults and juveniles made more feeding attempts during higher tides but had higher rates of foraging success at lower tides, i.e. they were more likely to actually catch a fish then. The higher foraging success seen during lower tides may have been driven by increased prey visibility, and is a similar result to studies of kingfisher feeding success in shallower water along freshwater streams. And even though the juveniles seemed to be catching on pretty quickly, the adult birds were still twice as successful at catching fish and caught fish twice as large. Interestingly, adults and juveniles combined, the family at Jackson Beach was over twice as successful at catching prey than the FHL family. A possible explanation for this may be the shallower water at Jackson Beach which appears to be an important component of kingfisher foraging habitat.

(Bottom photo) Maria (left) and Hannah (right) enjoying the sunset on their last day of the MBM course.  Photo by Laurel Yruretagoyena

Apart from the experience of spending our time on beautiful San Juan Island observing interesting birds and charismatic marine mammals, the MBM course helped us grow the foundation for building our careers, and also provided us the mentorship we needed to publish our first paper. The class benefited hugely from experienced and caring mentors Breck Tyler (U.C. Santa Cruz), Eric Anderson (British Columbia Institute of Technology), and Dave Slager (University of Washington). We not only learned about marine mammal and bird ecology, we learned about study design, data collection, literature review, data analysis, writing, and public speaking. The process of getting the paper published at Wilson Journal of Ornithology, with guidance from Dave and advice from Breck and Eric, continued on the UW main campus long after our time at FHL. The MBM course also left a lasting personal impact. The work we did together and the friendship we developed validated the importance of finding allies and a support system – especially when trying to navigate the challenging road of being women in science.

At the time of taking the MBM class, Maria was pursuing her Masters in Physics at Purdue. This summer quarter on San Juan Island convinced her to switch fields and pursue her passion for Ecology. The skills she learned in this course, including teamwork, helped her get into the graduate school program of her choice: Quantitative Ecology and Resource Management at UW. This program was the perfect opportunity for her to use her quantitative background to answer ecological questions. Maria has since been studying the ecological implications of collective behavior in animals, and had the opportunity to return to FHL for the MBM course as a Teaching Assistant – a way of paying forward the great mentorship experience she once received as a student.

After completing the MBM class, Hannah continued to strengthen her research background by applying the skills she learned to her senior thesis project on the relationship between wildfires and trophic cascades initiated by wolves in Northeastern Washington. After graduation, her research experiences at the UW and FHL helped her succeed in numerous wildlife field technician positions. Currently, Hannah is working at Grand Teton National Park where she assists with research on the native bighorn sheep population.

Laurel had an internship on San Juan Island with Oceans Initiative after completing the MBM class. The skills from the class supported her during her internship and her subsequent job as a Research Associate for Oceans Initiative, where she studied killer whale behavior and dolphin health using breath samples. Laurel is now working as a Clinical Research Associate for Loyal, a female-founded biotech company working to improve canine healthspan and lifespan.

While at FHL, Maria and Laurel benefited from funding via the Adopt-a-Student Program.