What a dilemma. How do voters decide on a levy renewal, when an anti-levy group is disseminating misinformation and outright lies? Here are some facts that I hope will help bring clarity to this important issue.  Islanders will be much better off if the levy is approved and San Juan Emergency Medical Services continues.

1. QUESTIONABLE LEADERSHIP: If the levy renewal fails, EMS service on San Juan Island would be under the leadership of a fire chief who has caused tens of thousands of dollars of damage to the county-owned boat. And lied about it. This article - San Juan Island Fire District kept mum on damage to Sheriff's boat includes a letter from Sheriff Krebs and a detailed report from Captain Deb Fritz describing the incident.

2. DISTORTED HISTORY: One of the misleading statements by the fire district is that they have been providing Emergency Medical Services for more than 30 years. It has not. Ask anyone who has lived here for several years. I've lived here for 31 years and have reported on numerous incidents. It looks like the fire district is counting responses by personnel who volunteer for both SJ EMS and Fire District #3.

SJ EMS is the only agency that has trained paramedics and EMTs. San Juan Island Fire and Rescue does not have any paramedics. It has some firefighters that are crosstrained as EMTS. SJIFR cannot transport patients. It does not have an advanced life support certification.

BTW: Margaret Longley will be SJ EMS's fifth paramedic once she finishes her training this year. Once she is onboard, the paramedics will be responding from the Frank Wilson EMS building. Currently they often respond from their homes. It has to do with labor laws.

4. LACK OF FOLLOW THROUGH - Much is being made of the fact that the Citizens Advisory Group recommended fire and the public hospital district pursue integration. CAG also included a list of seven things that absolutely had to be done before integration. The Fire District ignored the list. For example, they won't increase the number of Fire Commissioners from three to five.

As part of  working toward integration, Chief Collins agreed to an implementation steps timetable. He didn't meet it. 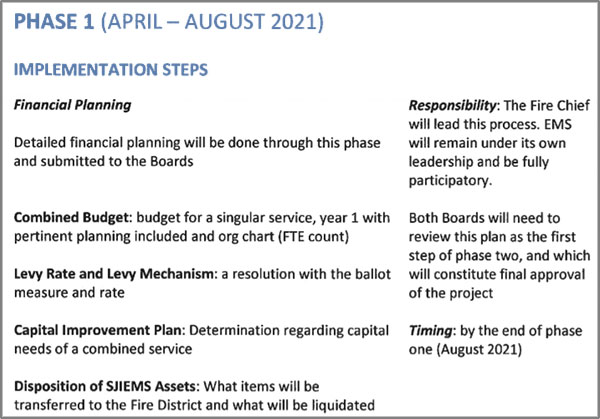 The only part of this slide that was completed was the resolution.

5. UNCERTAIN FUTURE: SJ EMS has several programs, some funded by grants, that provide items like carseats and bicycle helmets for kids. Another program, Community Paramedicine,  is run by Lainey Volk of SJ IEMS.  She says, the main goals of the program are to improve the quality of life and health for our citizens while reducing the cost of healthcare. This meets the hospital district’s goal of “aging in place,” by helping meet the needs of higher risk patients while keeping them in their homes.

It is not known if such programs would continue if the levy fails.

I hope this helps. It's very difficult to overcome outright lies. People find it hard to believe that someone would blatantly lie to them. Unfortunately and sadly the anti-levy group is doing just that.

Please do the right thing and Vote Yes on the SJ EMS levy renewal.