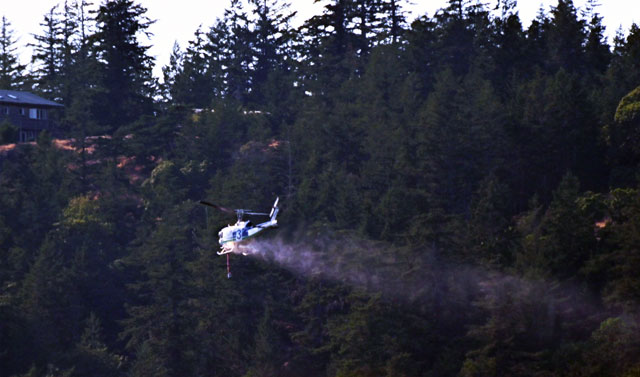 It's been an unusually stressful summer in the San Juan Islands. In addition to the usual call, first responders have been extra busy, especially in the last two weeks. Orcas Island Fire and Rescue had to handle three simultaneous calls that each needed medevac services. Friday Harbor Fire and Rescue extinguished  two fires on Mt Dallas in three days. DNR helped on one, with its helicopter dumping water from Trout Lake (photo above by Brad Pillow). EMS crews have been responding to numerous calls including a few where CPR wasn't successful. Deputies have been assaulted by an unruly passenger on the ferry, threatened by a knife-holding trespasser, kept busy with 15 responses to an intoxicated screaming man in downtown Friday Harbor.  The most recent Sheriff's log is posted here.

For the general population, dealing with the uncertainty of the ferry service, the loss from the devastating arson fire, inflation, the crowds, the speeding, the hit-and-run damage to parked cars, has added to stress levels. The heat hasn't helped, even though we are more fortunate than most of the U.S. population in that regard. And of course, the deaths of beloved islanders has hit especially hard. 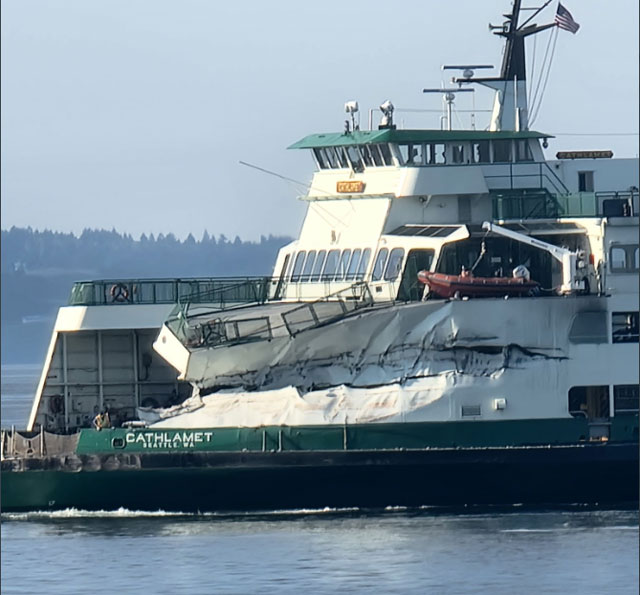 The ferries are not going to improve soon, since WSF is now down another ferry. The Cathlamet's hard landing into the Fauntleroy crunched the ferry. It will be out of service for a while which will have effects on service throughout the system. Details aren't available yet.

August, the busiest month, is now here. With a bit of effort, we can help each other make it through this challenging month. Let's try having more patience with visitors and ferry workers. Vacationers in August tend to be mostly families. They are counting on getting the most out of their limited time so they tend to over react when things go awry.

And let's be sure to thank the first responders. We're fortunate to have highly trained and dedicated crews.

Let's do what we can to reduce fire risk. The second Mt Dallas fire may have been caused by a spark from a piece of equipment. That's happened  in the past including this fire a few years ago on a field on Beaverton Valley Road. 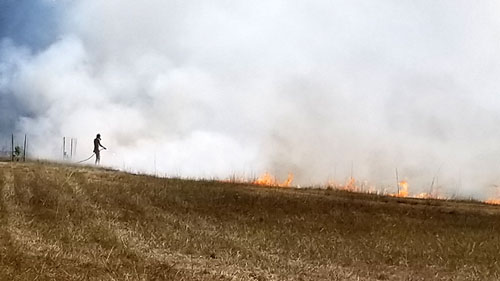 Farm worker uses a garden hose to try to control the fire caused by sparks from a mower. Sharon Kivisto photo

Check out the Fire Marshal's web page on the county's website for information about fire safety.

Here's hoping we all have a peaceful, congenial, cooperative, fun August. The county Fair is back and so is the Encampment at English Camp. And remember we get the islands back after Labor Day.