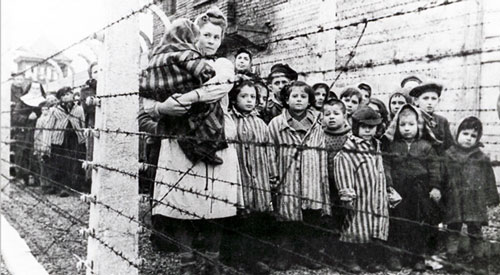 January 27, 2020 marks the 75th anniversary of the liberation of the last few thousand souls at the death camp at Auschwitz. In these uncertain times in which we are radically divided and democracy itself is imperiled we must reflect what hatred, dogma, and even worse, indifference to those seemingly not like ourselves can do. Paraphrasing the late mathematician and philosopher Jacob Bronowski (https://www.youtube.com/watch?v=ltjI3BXKBgY) :

It's said that science and now technology will dehumanize people and turn them into numbers. That's false, tragically false. Consider the concentration camp and crematorium at Auschwitz. THIS is where people were turned into numbers. Into a pond were flushed the ashes of some four million people. And that was not done by gas. It was done by arrogance, it was done by dogma, it was done by ignorance. When people believe that they have absolute knowledge, convincing others that they are infallible, with no test in reality, this is how they behave. This is what men do when they aspire to the knowledge of gods.

Science is a very human form of knowledge. We are always at the brink of the known; we always feel forward for what is to be hoped. Every judgment in science stands on the edge of error and is PERSONAL. Science is a tribute to what we can know although we are fallible. In the end, the words were said by Oliver Cromwell: "I beseech you in the bowels of Christ: Think it possible you may be mistaken."

I owe it as a pediatrician and as a human being to the many members of my family who died here and in the Warsaw Ghetto and Treblinka, to stand here as a survivor and a witness. We have to cure ourselves of the itch for absolute knowledge and power. We have to close the distance between the push-button order and the human act.

We tend to focus on the enormity of these crimes against humanity, marking the dates and goon with life. What we so often gloss over is the destruction of each individual that lies at the heart of genocidal thought and act.

“You who live safe
In your warm houses,
You who find warm food
And friendly faces when you return home.
Consider if this is a man
Who works in mud,
Who knows no peace,
Who fights for a crust of bread,
Who dies by a yes or no.
Consider if this is a woman
Without hair, without name,
Without the strength to remember,
Empty are her eyes, cold her womb,
Like a frog in winter.
Never forget that this has happened.
Remember these words.
Engrave them in your hearts,
When at home or in the street,
When lying down, when getting up.
Repeat them to your children.
Or may your houses be destroyed,
May illness strike you down,
May your offspring turn their faces from you.”

Remembrance without action is meaningless. As Bronowksi said “ We have to TOUCH people”.