According to the Pacific Whale Watch Association (PWWA), the Salish Sea is still abuzz in humpback whales – including new animals never documented in this region before, repopulating areas where humpbacks haven’t been seen since commercial whaling was stopped here in 1966. 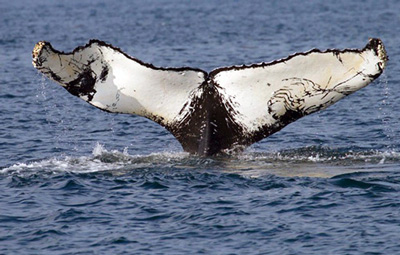 One of those new visitors is a whale now being called “Gnarly” by whale watchers, a large adult with a severely deformed or damaged tail fin, or fluke, an animal which according to PWWA crews has never been documented in these waters.

“This humpback has one of the strangest flukes I’ve ever seen,” explains Andrew Less of Five Star Whale Watching in Victoria, BC, who captured images of the whale in October and shared them with researchers and fellow captains and naturalists in the Association, to see if others could identify the individual. None have so far. In the meantime, the humpback hereafter will be known as “Gnarly,” not just for its funky fluke but its size, estimated to be close to 16 metres or 50 feet and about 40 tons. “This is one hell of a big animal.”

PWWA crews and researchers have forwarded these images to scientists and yet another addition to the “Humpback Comeback” catalog will be entered.

“The discovery curve with these humpbacks is still pretty steep,” explains Capt. Mark Malleson, veteran whale watch captain for Prince of Whales Whale Watching who also contributes research to the Department of Fisheries and Oceans Canada, the Center for Whale Research, and Cascadia Research Collective. “We’ve seen more humpbacks this year than ever, and they’re popping up now everywhere, in the San Juan Islands, Georgia Strait, Strait of Juan de Fuca, Haro Strait, Rosario Strait, Saanich Inlet – repopulating the areas where they were once abundant pre-whaling. Very exciting time out there now.” 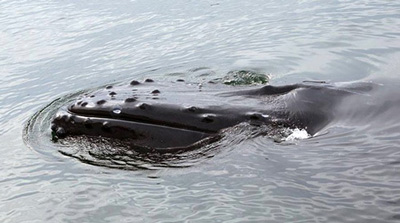 Humpback whales (Megaptera novaeangliae) are now full-swing into their fall migration, when they travel from their summer feeding grounds in Alaska to the warm waters of Hawai’i, Mexico and Central America to breed and have calves. These massive creatures – once hunted out in local waters – are continuing to resurface in record numbers here, increasingly taking an inside passage through local waterways as they make their way south. The resurgent humpbacks are giving environmentalists, researchers and marine mammal scientists an up-close look at an extraordinary conservation success story.

This past spring, after a five-year review, NOAA Fisheries proposed to delist most populations of humpback whales, including the ones we see in these waters. Researchers believe there are more than 21,000 humpbacks now in the eastern North Pacific, up from about 1,500 when whale hunting was banned in 1966, and as many as 85,000 worldwide. These animals visit the Salish Sea to feed before continuing their migrations. 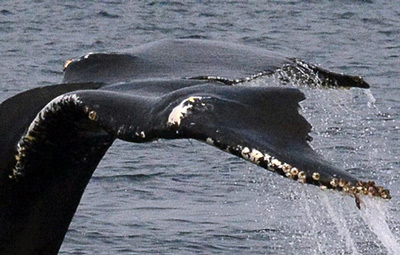 “Whaling went away and the whales came back. The ‘Humpback Comeback’ continues,” explained Michael Harris, Executive Director of PWWA, representing 36 operators in BC and Washington. “For many of us, this is our favorite time of year for whale watching. We’ve still got lots of resident and transient orcas out there, minke whales, dolphins and porpoises, even an extremely rare fin whale. But there’s nothing like getting out on the water on a quiet autumn day and hanging with the humpies.”

HOW TO HELP: For all those who want to help the whales, become a Member of The Center for Whale Research! The Pacific Whale Watch Association is proud to be a longtime supporter of Ken Balcomb and his team. Help them help the whales. www.whaleresearch.com. You can also help Cascadia Research Collective by going to www.cascadiaresearch.org.

More in this category: « Transient whale may be tangled in rope and float Orca free of entanglements »