The late afternoon incident began when the twin kayak went belly up north of Battleship Island. One of the kayakers managed to stabilze the water-logged craft and call for help. A Coast Guard helicopter and Canadian navy ship and the nearby whale watch fleet, coordinating via its radio network, fanned out in a search pattern. First to find the kayakers was Capt. Mike Kramer of San Juan Island Safaris, driving the M/V Sea Lion, followed by Capt. Andy Derksema of Maya’s Legacy Whale Watching at the helm of the M/V Peregrine. 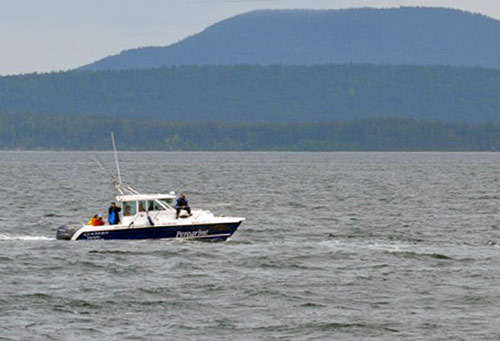 The Peregrine in Haro Strait

In a matter of seconds, with M/V Imagine of Maya’s Legacy now also on the scene, Capt. Alan Niles and Naturalist/First Mate Heather MacIntyre issued personal floatation devices (PFDs) to whale watch passengers and delegated responsibilities to them, then engaged the capzsized kayakers and prepared a throw rope secured to Imagine.

“Conditions were pretty bad out there,” explained Capt. Kramer. “There was a Small Craft Advisory in the northern inland waters. Choppy, lots of wind. Not a good place to be in the water hanging onto a kayak. We all had to be extremely careful. Great teamwork all around, even from the passengers. Everyone was focused on saving these guys.”

As the taller Sea Lion positioned itself as a wind and water break, MacIntyre and Capt. Niles hauled in the first kayaker by the man’s PFD. The second kayaker was quite a bit larger, upwards of 250 pounds, so the crew needed the help of the passenger to pull him onto the swim platform and then onto the boat. Both kayakers were safely secured in the cabin and treated for hypothermia. Reports are they are doing well.

“The passengers were amazing, as they always are when we respond to these emergencies,” said MacIntyre. “It was all hands on deck. They all were calm, collected and eager to help. In fact, had one of them not held onto me when I was pulling the second kayaker in, I probably would’ve gone swimming.”

Niles and MacIntyre even saved the kayak. The completely engulfed craft was retrieved – at great effort in rough seas, and at some expense to the deck of the poor Imagine – and as such, no longer a hazard to navigation. Niles notified the USCG that the kayakers were recovered and the kayak secured.

MacIntyre credits extensive MODs, man overboard drills, and other emergency training PWWA crews receive for giving them the tools they need to respond quickly and effectively to crises – and in water conditions like this, a few minutes can mean life or death.

This is the third rescue involving PWWA crews in the last six months, and the eighth in the last three years.

”We always say, we’re not just watching whales and wildlife out there, we’re watching out for everyone,” explains Michael Harris, Executive Director of PWWA, which represents 38 operators out of 21 ports in Washington and British Columbia. “When we’re able to talk to each other as we do, and coordinate these kinds of searches and respond to emergencies in this kind of way, we know we can save a lot of lives. Heather, Alan, Andy and Mike were awesome out there.”

HOW TO HELP: For all those who want to support research, contact the Center for Whale Research at www.whaleresearch.com. Help them help the whales.