Friday Harbor, WA – One hundred and eight days after their last visit, members of J-Pod returned to inland waters on July 27, 2021 alongside whales from K- and L-Pods. The sighting was a short visit rather than a ‘return’ of the whales to what used to be their core summer habitat, as the next morning they were already heading back west out towards the open ocean. 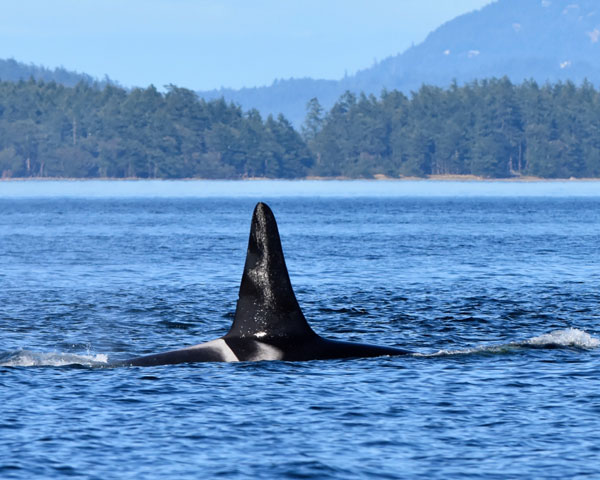 K21 Cappuccino in July 2020 during one of his last visits to the Salish Sea. Photo credit: Monika Wieland Shields/ Orca Behavior Institute

The exciting moment of seeing them, including the youngest calf L125, a female born earlier this year, was dampened on Wednesday when a commercial whale watch vessel discovered a single orca in distress near Race Rocks in the Strait of Juan de Fuca, where tours often stop to view pinnipeds. The whale, identified as adult male Southern Resident K21, also known as Cappuccino, was in poor body condition, emaciated and with a collapsed dorsal fin, which can sometimes accompany illness in wild orcas.

“Cappuccino is one of the best-known Southern Residents, easily identifiable by his check-mark shaped saddle patches and a notch in his tall dorsal fin,” said Shields. The 35 year-old male has been without any living immediate family members since the loss of his presumed sister K40 Raggedy in 2012, but had been “adopted” by adult female K16 Opus with whom he regularly traveled. “The average life expectancy of a male resident killer whale is about 30 years,” explained Shields. “It’s never easy to lose one of these whales, but it’s even worse when they aren’t living a complete life. K21 at least had that.”

When seen on July 28, 2021 K21 was several miles behind the rest of his pod making little progress attempting to swim against the strong currents. Some speculate he was left behind, while others suggest he may have chosen to be alone in this moment. In recent years, all three Southern Resident pods have gathered several times in the Salish Sea alongside a birth or death in the population.

“We will never know for sure why they all came here now, or how they made the decision of whether or not to be with K21 at this time,” said Shields. “While there are many similarities between us and them, whale culture is not human culture. I trust them to handle these difficult moments in the way that is right for them.”

The images of K21, shared on social media by a whale watch company out of Sooke, did not show any obvious visible signs of an external injury such as a ship strike. While clearly malnourished, we cannot say for sure what contributed to his severe physical decline - illness, lack of food, or most likely some combination of factors.

The Department of Fisheries and Oceans in Canada was attempting to get on scene to assess his status further, and any inquiries regarding the details of his condition or potential updates should be directed to them.