OLYMPIA – With scientific reports of two-year-old Southern Resident killer whale J56’s (Tofino) poor condition, the Washington Department of Fish and Wildlife (WDFW), NOAA Fisheries, and partners are calling upon recreational boaters to follow Be Whale Wise regulations and give the whales extra space. 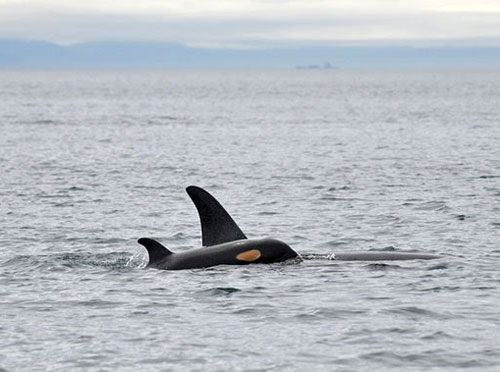 “The news of Tofino’s worsening condition further emphasizes the harrowing truth that Southern Resident killer whales are in trouble,” said Kelly Susewind, WDFW director. “The loss of even one young individual in the Southern Resident population is too great. By following Be Whale Wise regulations, boaters can help to give Tofino a fighting chance.”

J56 was born to J31 (Tsuchi) in May of 2019. By September 2020, J56’s condition had declined. Her skin had become pale, and an assessment of her body condition showed a decline bordering a “poor” rating.  When SeaLife Response, Rehabilitation and Research (SR3) observed J56 again on Sept. 1, 2021, her paleness had not improved, and her body condition had further declined. According to a recent study, whales deemed in poor condition have a significantly higher chance of dying.

"We first expressed concern about J56 in summer 2020 when we measured her to be thin and also noticed her skin had a paler color tone - images collected this week show us that her condition has worsened" said Dr. Holly Fearnbach from SR3.

"By comparing J56's measures of condition to young whales of similar age in our 14-year dataset, we can categorize her condition as poor, which confers a significantly elevated risk of death over the coming months" said Dr. John Durban, from Southall Environmental Associates, who works closely with SR3.

Before the birth of two calves in September 2020, and another first seen in February 2021, the Southern Resident killer whale population had dipped to only 72 individuals. Following the presumed death of K21 (Cappuccino) in late July, the population currently sits at 74 individuals. J Pod =24, K Pod= 17, and L Pod=33.

As a young female, J56 is important to the endangered population’s reproductive capacity.

“Many partners are working together to address all of the threats to the whales. We know having enough prey and vessel impacts are connected and the science tells us that the whales hunt more successfully when they have enough space and quiet to find them,” said Lynne Barre, NOAA Fisheries Recovery Coordinator for the Southern Residents. “With all of the region wide efforts to increase Chinook salmon available to the whales, this is where everyone out on the water can do their part to help the whales by giving them that space.”

A key finding from research that NOAA Fisheries published earlier this year indicated this is especially prominent in females, which often give up foraging when boats approach within 400 yards. Research shows this may be most concerning in pregnant or nursing mothers that must support calves.

J56’s pod is currently known to be in Washington waters and WDFW and NOAA Fisheries enforcement officers will be performing patrols to help enforce orca protection regulations.

With Labor Day weekend kicking off today, officials ask boaters to learn and abide by Be Whale Wise regulations that support the whales’ ability to move about, feed, and socialize. Vessel traffic can interrupt echolocation clicks the whales use to track and capture fish.

Washington law requires vessels to stay at least 300 yards from Southern Resident killer whales and at least 400 yards out of their path or behind the whales. Vessels must also reduce their speed to seven knots within one-half nautical mile of Southern Residents.

“We urge all boaters to give Tofino and her extended family extra space out on the water, this holiday weekend and beyond,” said Nora Nickum, Ocean Policy Manager at the Seattle Aquarium. “Extra space and quieter waters will give the endangered orcas a better chance to find salmon and share that food with each other.”

Boaters are encouraged to watch for the Whale Warning Flag, an optional tool from the San Juan County Marine Resources Committee, that lets others know that there might be whales nearby. If boaters see the flag, they should slow down and continue to follow Be Whale Wise regulations.

Based on the assessment of her worsening condition, WDFW adopted an emergency rule to designate J56 as vulnerable. The vulnerable designation means that commercial whale watching boats will not approach within one-half nautical mile of J56 or the group she’s traveling with.

Upon learning about J56’s condition, the Pacific Whale Watch Association (PWWA) immediately alerted PWWA vessel operators to the situation and J56’s status as a vulnerable individual.