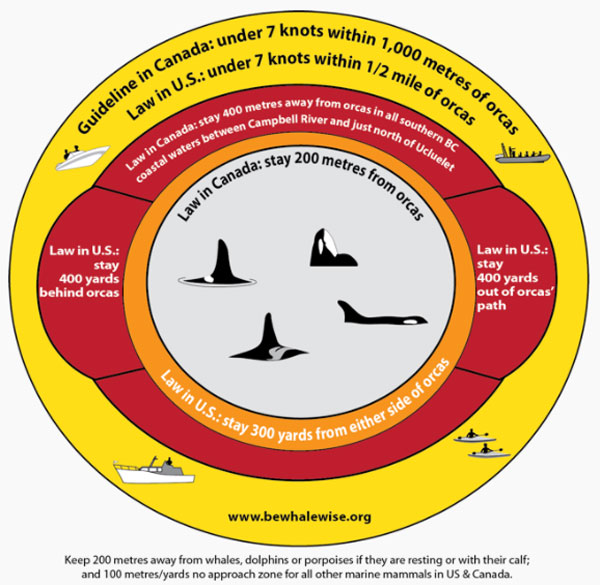 OLYMPIA – With scientific reports of multiple pregnancies among J-pod, the Washington Department of Fish and Wildlife (WDFW), NOAA Fisheries, and partners are calling upon recreational boaters to follow Be Whale Wise regulations and give endangered Southern Resident killer whales extra space.

Given the high rate of failed pregnancies among Southern Residents in recent years, boaters’ adherence to Be Whale Wise regulations is especially important. Research shows that food consumption increases by 25 percent in the final month of gestation, further emphasizing the importance of quieter waters so that Southern Resident can find food.

"We've got many people looking at the science to understand where we can continue to improve the odds for this population,” said Kelly Susewind, WDFW Director. "Now that we've learned of multiple pregnancies among the Southern Residents and the impact that boats can have on new mothers, we really need everyone to follow Be Whale Wise regulations in support of these endangered whales’ survival.”

Following the presumed death of K21 (Cappuccino) in late July, the population currently sits at 74 individuals.

“We need to work together to give these pregnant whales every chance of success,” said Scott Rumsey, Deputy Regional Administrator for NOAA Fisheries West Coast Region. “The more they can forage undisturbed, the better their odds of contributing to the population.”

Listed as endangered under the Endangered Species Act in 2005, Southern Residents face three main threats: a lack of food, contaminants in their water and food, and vessel noise and disturbance as they forage and communicate using echolocation.

A key finding from research that NOAA Fisheries published earlier this year indicated the effects of vessel noise are especially prominent for females, which often give up foraging when boats approach within 400 yards. Research shows this tendency to give up on finding food when boats are nearby may be most concerning for pregnant or nursing mothers that need to find more food in order to support calves.

"This is reminiscent of another adult female in J pod, J35 (Tahlequah), who we documented to be pregnant in summer 2020 and subsequently monitored her successful pregnancy two months later,” said Dr. Holly Fearnbach from SeaLife Response, Rehabilitation and Research (SR3). “We hope we can document similar success for this year's group of pregnant females"

"This hope, however, is fragile" said Dr. John Durban, who collected the drone images along with the team from SR3: "Last year, we documented a number of other pregnant females, who were not successful in rearing calves. Unfortunately, this is not unusual, and we have documented a high rate of reproductive failure over the last decade. The survival of every calf is crucial to the endurance of this small and endangered population - every calf matters.”

Based on the reports from SR3, WDFW adopted an emergency rule that designates the whales currently in the latter stages of pregnancy as vulnerable. This designation is meant to give the pregnant whales extra space to help ensure they meet their late-stage pregnancy nutritional needs and to give both mother and calf the best chance of surviving the birthing process.

While the vulnerable designation creates a half-nautical mile bubble around the pregnant whales and their traveling companions, it doesn’t affect commercial whale watching of other Southern Resident killer whales, Bigg's killer whales, humpback whales, or any other whale species currently in the area.

With the news of these pregnancies, officials ask boaters to learn and abide by Be Whale Wise regulations, which protect the whales as they move about, feed, and socialize. Washington law requires vessels to stay at least 300 yards from Southern Resident killer whales and at least 400 yards out of their path or behind the whales. Vessels must also reduce their speed to seven knots within one-half nautical mile of Southern Residents.

Boaters are encouraged to watch for the Whale Warning Flag, an optional tool from the San Juan County Marine Resources Committee, that lets others know that there might be whales nearby. If boaters see the flag, they should slow down and continue to follow Be Whale Wise regulations.