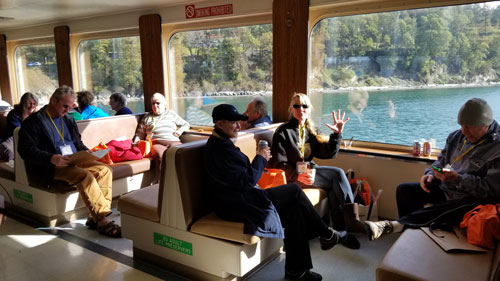 Orcas Power and Light Cooperative's (OPALCO)  annual meeting was a bit cozier than usual this year. It took place on the inter-island ferry Tillikum. Changing to the smaller ferry meant, OPALCO saved money by not needed to provide a separate boat to ferry San Juan Island folks over to Orcas to catch a ferry. It also meant a better schedule for attendees. Caterers were hired from Orcas Island, Lopez Island and Friday Harbor to provide the lunches. 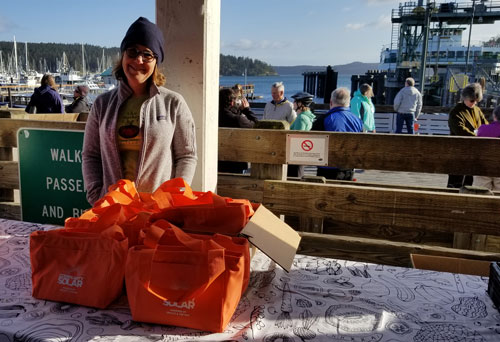 Chef Laurie Paul of Market Chef put together the lunches handed out at the Friday Harbor terminal.

The election was conducted by mail and online prior to the meeting. Richard Christmas and Jeffrey Struthers were running unopposed for the two open spots  in District 2. Randy Cornelius and Winnie Adams stepped down from the board.  District 2 includes Orcas, Armitage, Big Double, Blakely, Fawn, Little Double and Obstruction islands. (All cooperative members vote for the board members regardless of district. Sixteen percent of eligible voters submitted their ballots. Ten percent were required to make it a valid election. 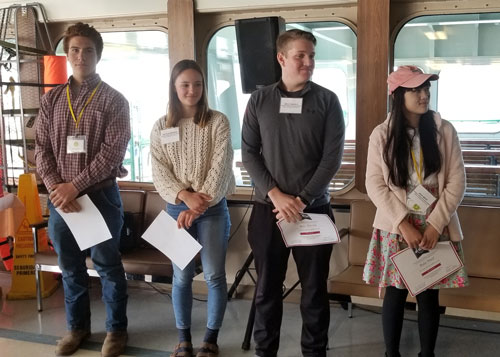 Board Chair Vince Dauciunas opened the meeting and listed four major accomplishments of the past year. The replacement of the 1977 submarine cable between Lopez and San Juan Islands was first. A video of replacement was shown at one of the informational tables. Upgrading the 1950s-era substation on Decatur Island will reroute the power to the east side of Orcas Island, providing redundancy for that area.

The third item, Dauciunas mentioned, the Community Solar project, will be built nest to the Decatur substation. Ninety percent of the project has already been subscribed. The battery that will be in place will help OPALCO drop down the peak. Since Bonneville Power Administration bills according to the peak, the project is expected to keep costs down. Read more about COMMUNITY SOLAR here.

Dauciunas praised the line crew for their work dealing with a variety of outages. 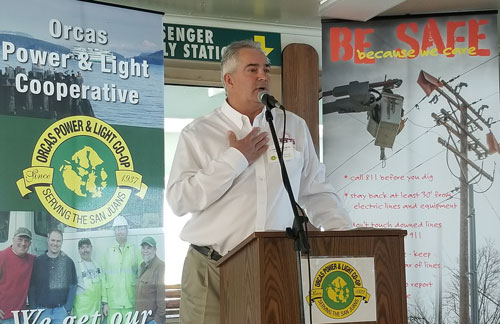 OPALCO Executive Director Foster Hildreth praised the line men and the engineers for their outstanding work this past year.  He answered questions from co-op members.

Copies of the Annual Report were available and it can also be read online. ANNUAL REPORT. Every co-op member in attendance received a $5 credit on their next bill, another $5 credit is available for members who fill out an online survey.

Attendees also received reusable mugs which could be refilled with tea or coffee at the Tillikum galley during the meeting. 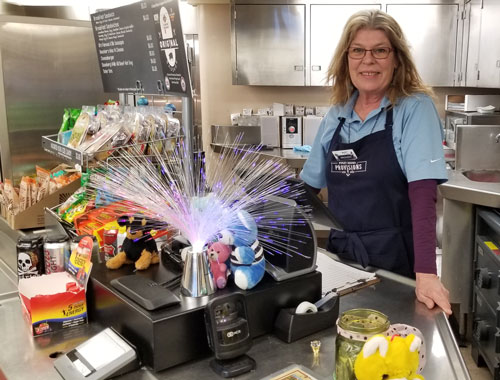 Julie said many people didn't realize there was even a galley open on the inter-island ferry. The menu includes a very popular mac 'n cheese entree.

The meeting wound up with the distribution of door prizes, many of which are donated by vendors. This year's items included Google mini-home, $150 gift card for Home Depot, iHome, and more. 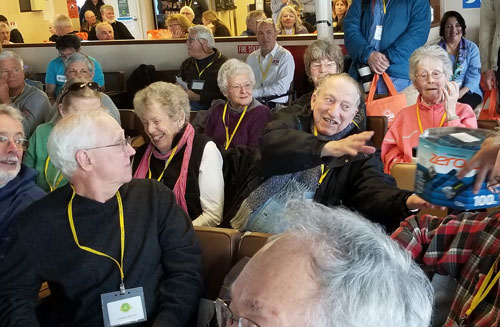 One lucky co-op member reaches for his prize. Photos by Sharon Kivisto