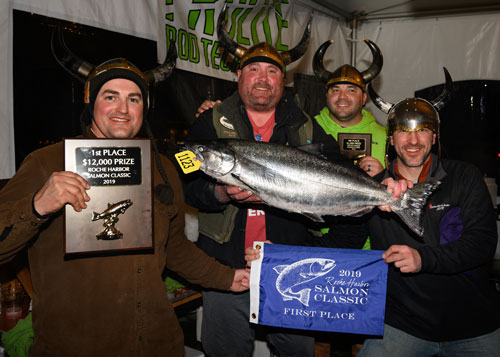 “We’ve fished all sixteen years and we finally made it,” McAbee said of the winning king. “That’s one of the biggest blackmouths I’ve ever caught.”

The top finishers, their winnings and their salmon’s weight are:

Boat #23 with Captain Greg Gorder and Chuck Payne, Hugh Allen and Robbie Morris won $2,000 for the Best Boat Total Weight with 46.11 pounds. (Note this is a correction made after the announcement).

McAbee and his fishing partners Dale Nelsen, Bellingham, and Jed Buchholz and Ace Ward, both of Brighton, Colo., decided to share some of the winnings if their boat’s big fish finished on top of the leader board. “On the way in we decided we’d sponsor a boat next year for Salmon for Soldiers,” McAbee said. “So there will be three boats instead of two.”

Roche Harbor Resort and Island Boat Rentals sponsored the Salmon for Soldiers boats once again. Two anglers on the Salmon for Soldiers boats — Troy Hakala of Gresham, Ore. and Wayne Pong of Oregon City, Ore. — not only enjoyed a weekend of fishing, they went home a bit richer: This year the Classic’s organizers awarded $500 apiece to the top two soldier-anglers. Hakala hooked a 9.1 king and Pong caught a 7.0 chinook.

One hundred forty-eight salmon were caught by 357 anglers fishing from 100 boats.