Someone testing a home-made firecracker set off a grass fire on Goose Island Friday, evening according to witnesses. Residents at Cape San Juan on the south tip of San Juan Island heard a "boom", smoke filled the air and flames shot up from the east-side of the island just before 6 p.m. June 26, 2015.

Two residents carrying fire extinguishers sped in their private boat to the island and attempted to put the fire out.

9-1-1 was called and San Juan Island Fire and Rescue fireboat Sentinel was dispatched.

Goose Island is managed by the Nature Conservancy and visiting is prohibited except for researchers from the University of Washington Friday Harbor Laboratories.

Upon arrival, the Sentinal 's firefighters pulled out a hose and started spraying water on the fire which now had flames visible on the west side of the island facing Cape San Juan.

At 8:15 p.m. the decision was made to let the fire burn itself out overnight. 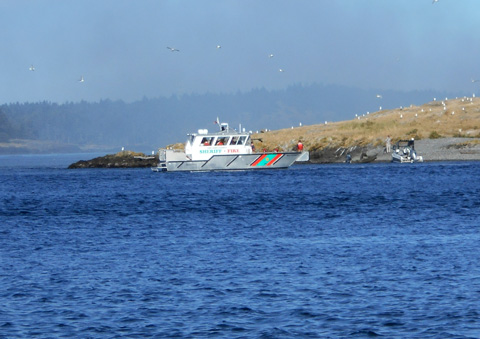