Slideshow: Once on This Island 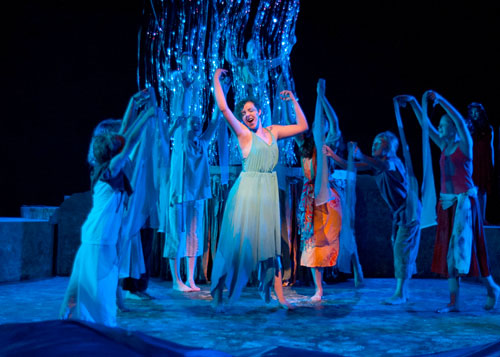 Theatre Arts for Kids present Once on This Island, Jr., written by Lynn Ahrens, music and lyrics by Lynn Ahrens and Stephen Flaherty and directed by Penelope Haskew  onstage at 7 p.m. Thursday, August 17 and Friday, August 18 at the Whittier Theatre at San Juan Community Theatre. A matinee will be held at 12 noon on Saturday, August 19, 2017.

This summer’s three-week musical theatre camp for experienced actors 7-18 years old culminates in three performances of Once on This Island Jr. – an original theatrical adaptation of the Tony-nominated Broadway musical by the legendary writing team, Ahrens and Flaherty.

Through almost non-stop song and dance, this Calypso-flavored tale features a peasant girl who rescues and falls in love with a wealthy boy from the other side of her island. When the boy is returned to his people, the fantastical gods who rule the island guide the girl on a quest that will test the strength of her love against the powerful forces of prejudice, hatred and even death.

Tickets: Adults/$8; Students/$5  Thursday is "Pay What You Can" at door. They can be purchased online or at the box office.

More in this category: « Dead Man's Cell Phone at SJCT - Photos added Slideshow - Peter and the Starcatcher at SJCT Oct. 13-28 »