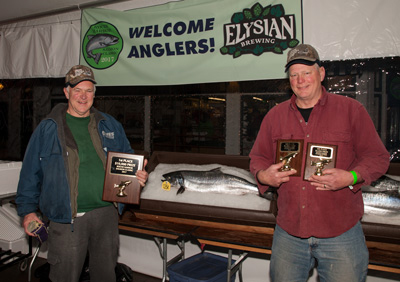 Winning Northwest derbies isn’t new to the Skagit Valley angling duo — Thomas and Quesnell won the Olympic Peninsula Derby in 2013, 2014 and 2015. Quesnell placed fifth in the Roche Harbor Classic two years ago, but the pair was especially pleased with this year’s finish on what’s basically their local fishing grounds.

“I’ve been fishing the San Juans for 52 years,” said a beaming Thomas.

“We beat Uncle Pete,” Thomas said of Shaw Island fishing legend Pete Nelsen. “That was our goal going into this.”

Thomas landed the winner at 9:30 a.m. Friday in Thatcher Pass. “We heard of a lot of smaller fish being caught, so we thought we had a pretty good chance,” he said.

The former owner of Skagit Marine and Tom and Jerry’s — knows boats and might have a lucky one in his recently purchased 21-foot Hewescraft. “I had to break my new boat in right,” Thomas said. 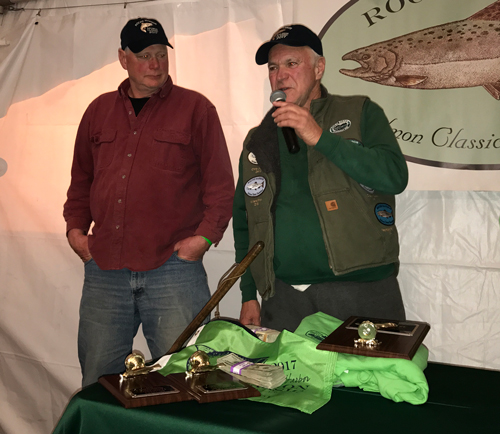 The derby sold out in October. There were 347 anglers on 100 boats. Weather was clear and cool. Friday broke the previous record of 104 set in 2013 with a total of 156 weighed in. Anglers hauled in 140 fish on Saturday on calm seas and under beautiful blue skies.

The results from the derby are: 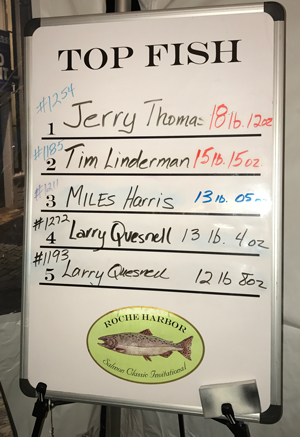 Photos and videos posted on the derby's Facebook page.