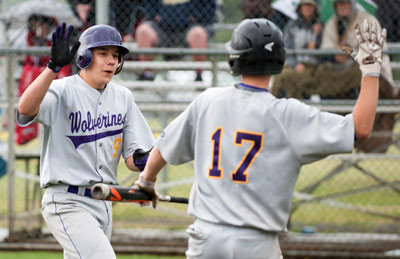 “Except for a couple of hiccups this year, they over-achieved,” said head coach Rich Warin. “It’s a pleasant surprise the way they gelled and played above expectations.”

“We’re proud of the growth, hard work and dedication we saw,” said assistant coach Steve Schramm. “They rallied over and over again.”

“We had a good year,” said Austin Grimes, the team’s only four-year player. “It was the first time I went to state, so it was a great way to end the season of my senior year. It was a lot of fun.”

Grimes and his teammates were about as cheerful as the gray, rainy morning after they made several defensive miscues against Tri-Cities and six zeros were posted on Friday Harbor’s line on Adna High School’s scoreboard. The Jaguars scored three runs on three hits and three errors in the first inning and added another run in the third. Friday Harbor's offense sputtered early in the game but left the bags full in the sixth before erupting in the seventh.

"Our guys lived up to the old saying: 'You got to believe,'" said Friday Harbor Schramm said.

“I was extremely excited,” Grimes said. “It was a big surprise. We came back and showed them what we could do.”

Herko, who went the distance for the win, struck out the first two batters in the bottom of seventh before giving up a triple. The next batter popped out and the Wolverines celebrated the victory that guaranteed them at least a top-eight finish.

Herko smacked a single and double and Black doubled in two runs for Friday Harbor. Junior Corbin Williams rapped a base hit and sophomore Jackson Pieples drove in a run.