Friday Harbor boys basketball team earned a trip to the Class 2B State Tournament’s elite-eight round by outscoring Ocosta 33-15 in the second half of a 62-52 Regional Tournament victory Saturday, Feb. 27, 2016 at Mount Vernon High School. 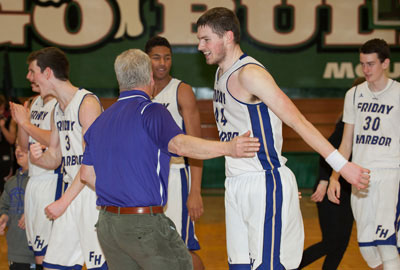 “This is the best feeling I’ve had in quite a few years,” said senior Luke Stromberg, who led all scorers with 18 points. “We could be in Mount Vernon talking about how the season was, instead we’re going to state.”

“It’s been 10 years...We’re there now,” said senior Danil Sonjaya, referring to the Wolverines’ appearance in the state tourney in 2006.

Ocosta (23-4) built a 35-29 lead in the first half with a fast-striking offense and disrupting press against the Wolverines (19-5). “They played pretty actively,” said Friday Harbor coach Rod Turnbull. “It took us awhile to adjust to their quickness.”

Friday Harbor began matching Ocosta’s aggressiveness in the third period and the Wolverines’ press slowed the speedy the Wildcats’ on offense.

“Our players responded really well,” Turnbull said. “They picked up the pace.”

In the first and second periods the Wildcats seemed to be out-hustling the Wolverines but that reversed in the final two quarters.

“The 50-50 balls were won by them in the first half but we turned it around in the second half,” Turnbull said. “They were just determined to find a way to make things happen.”

Junior Jake Lowe’s three-pointer put the Wolverines up 40-39 with three and a half minutes to go in the third quarter. Forty-five seconds later Stromberg popped his fourth trey of the game and sophomore Isaac Mayer sank a free-throw. The Wildcats scored three points to close the period but the Wolverines outscored them 15-7 for a 44-42 lead. Friday Harbor opened the final period with a 7-0 run to take control of the game and finished the quarter scoring 18 points to the Ocosta’s eight.

“It was never in anyone’s doubt that we could come back,” Jangard said. “We started working as a team...It flowed so perfectly.”

“We stuck to our plan,” Sonjaya said.

“It was impressive,” Patrick added.

The Wolverines kept their comeback on track by converting 10 of 14 free-three attempts in the fourth quarter. Friday Harbor finished the game 14-for-24 at the charity stripe while Ocosta went 2-for-7.

Stromberg drilled four three-pointers. He went 4-for-4 at the free-throw line -- sinking all of them in the fourth quarter -- and his younger brother Matt unknowingly provided an assist. “On my final two free-throws I tuned-out the crowd by imagining my brother talking crap to me,” Stromberg said.

Junior John Gustafson pumped in 13 points -- including a trey during the Wolverines’ run in the fourth quarter. He shot 5-for-5 at the free-throw line and led the Wolverines with 10 rebounds.

Jangard and junior Eli Cooper-West contributed 11 points for the Wolverines.