Rachel Porter and Echo Wood -- the only seniors on Friday Harbor High School’s girls soccer team -- likely didn’t expect the the Wolverines to return to the state playoffs this season. Nine of their teammates from last season’s fourth-place team graduated, but with Porter and Wood’s leadership, and some quick-learning younger players, the Wolverines are a win within a consecutive top-four finish. 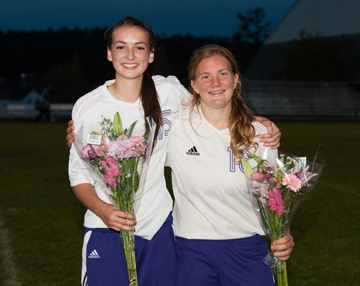 Friday Harbor seniors, Echo Wood, left, and Rachel Porter have led the Wolverine girls soccer team back to the Class 2B State Tournament.

“I’m really happy we made it again this year,” Porter said.

The seniors and the rest of the Wolverines will have to play at the top of their game to advance: Friday Harbor meets undefeated Adna in a 2015 Class 2B State Quarterfinal at 2 p.m.  Saturday, Nov. 14, 2015 at Tumwater High School.

“Adna beat us 1-0 for third place last year and they have 93 goals to their opponents’ four this season,” said Friday Harbor coach Paul Hopkins. “They are going to be a challenge. We’re going to have to have a really good game and they’re going to have to make a few mistakes.” Hopkins will be looking to Wood and Porter to continue the steady leadership they have exhibited all year for the Wolverines, who placed second in the Northwest 2B/1B League with a 9-3 record.

“Echo is our offensive and team leader. She really stepped up this season,” Hopkins said.

“Rachel is pretty amazing,” Hopkins said of the savvy defender who was worked through substantial physical setbacks over the years. “She has worked harder than anyone in the off-season. She has a good attitude and is a smart player.”

Coupled with Porter’s and Wood’s leadership is a better than usual contribution from the Friday Harbor’s first-year players newcomers this season. “It’s a very talented freshman group out of what has developed into a great club system here,” Hopkins said. Friday Harbor, 10-6 for the regular season, met one the state’s best in their first playoff game -- Crosspoint Academy, last year’s champion. The Warriors blanked the Wolverines 4-0 on Nov. 4 forcing Friday Harbor into must-win contest against Mount Rainier Lutheran Nov. 7.

Porter’s and Wood’s play proved instrumental it in the Wolverines’ 2-1 state-berth-clinching victory over the Hawks.

“In the first half they snuck one in but we dominated the field,” Hopkins said. “We had ample opportunities.”

Freshman Leah Black booted the tying goal mid-way in the second half. Porter and the other Wolverine defenders kept Mount Rainier in check and the scoreboard clock stopped at the two-minute mark.

With possibly a minute remaining, Wood split two defenders and worked the ball in front of the goal. Wood pulled back as if to shoot and the Hawks’ goalie dropped to block the shot. Wood paused and flicked the ball off the outside of her foot and into the goal’s lower right corner.

“It was probably the best goal I’ve ever scored and having it take us into state was really exciting,” Wood said.

Wood and her coaches had been working on the shot the entire season, but the forward said she would become “a little nervous” and could not quite complete the play in previous matches. When it really matter the Wolverine captain kept her composure.

“I stayed calm and thought about it and put it through,” Wood said.

“It was poetic,” Hopkins said of Wood’s shot. “We overcame a few hurdles in that game.”

“I was really happy with that last game,” Porter said. “It was the best game we played so far and a great way to get us into state.”

If the Wolverines upend Adna, they advance to final-four competition Nov. 20-21 in Sumner.