Betsy Wareham, competing on her home water, guided Purple Martin to a fifth-place finish in the 2019 Martin 242 North Americans June 28-30 on West Sound on Orcas Island. 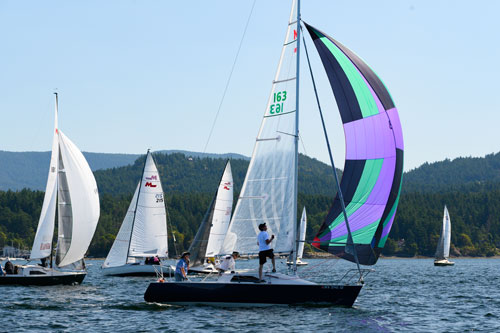 “In this fleet, with 27 boats, that’s quite an accomplishment,” said racer and organizer Ken Machtley.

Michael George, skippering All In, edged Michael Clements for first-place in the 10-race event hosted by the Orcas Island Yacht Club (OIYC). George, the second builder of the 242s, won three races and the Californian finished second in two others en route to his victory. Clements, of Vancouver, finished only eight points behind George.

“It came down to the very last race,” Machtley said.

OIYC was selected for the one-class, one-design event in recognition of their growing 242 fleet: The club grew from zero 242s in 2014 to eight in 2018. Organizers also selected Orcas Island for  the opportunity to experience a new and exciting venue. This was the first time ever that NAs have been held in Washington.

OIYC hosted the event in partnership with its title sponsor, Ullman Sails. 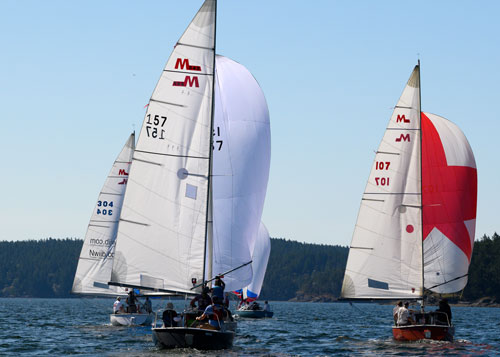 This year’s North Americans drew top sailors from Washington, California, British Columbia and even one from Toronto.

“It was an overwhelming success,” said Machtley of the championships. “We set a new bar for these.”

Machtley noted the one-design competition is especially exciting since all the competitors are racing the same style of sailboat. “It comes down to the sailor…It’s a lot of fun to sail one-design races,” he said.

The top five finishers and their points are:

The Orcas Island boats, their sail numbers and skippers competing in the NAs are:

OIYC welcomes islanders interested in sailing. The club meets every Wednesday evening in the summer at its dock in West Sound. Spectators can view the competition and possibly help crew.

“If we can make the room, we’ll get them out there,” Machtley said.

Two Martins are for sale and “are ready for the next owners to come join the fleet,” Machtley added.

ABOUT THE MARTIN 242 The Martin 242 is the most active keelboat racing class in the Pacific Northwest. Designed 30 years ago by well-known Vancouver yacht designer Don Martin, this 24’ speedster continues to attract top talent to its ranks. Strict class rules result in identical boats and racing that is truly a test of crew skills and strategy.

There are currently eight boats in the growing OIYC fleet and local Martin 242 crews have won the prestigious Whidbey Island Race Week overall trophy (2016) and the club’s coveted “Sailor of the Year” trophy for the past two years. Last year, local Orcas sailors placed 3rd, 4th, and 7th in the North American championship held in Cowichan Bay, British Columbia.