Jason Squibb isn’t in trouble for fishing instead of spending Valentine’s Day with his wife Krista. The Bow resident hooked the winning chinook in the 2020 Roche Harbor Salmon Classic and will be bringing home $12,000 in winnings. 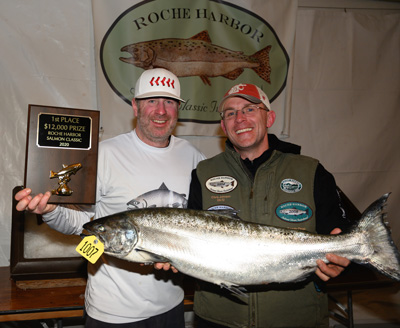 Krista agreed Jason could compete in the 17th Annual Roche Harbor Classic provided any winnings would go toward a kitchen remodel. “My wife is going to be getting a new kitchen,” Squibb said before receiving a few bundles of cash, a first-place trophy and other swag Saturday, February 15 at Roche Harbor Resort.

Squibb hooked the winning 18-pound, 14-ounce king about noon Friday near the north side of Waldron Island. His wife’s Valentine’s gift nearly was a sweet treat for a furry angler, though.

“A seal was coming after it when I was reeling it,” Squibb said. “That was a very scary moment.”

Squibb’s fishing partner Ryan Kies made noise and “reached out with a net as far as he could” to land the fish before the seal made it a meal.

While thrilled about winning twelve thousand clams, Squibb was also honored to have his name added to the winner’s vest. “Those are some of best (fishers) in the region.”

More in this category: « San Juan Island Firefighters to participate in challenging fundraiser to fight leukemia and lymphoma Online fundraiser for Jo George »