Slideshow: Friday Harbor vs Coupeville May 13, 2022 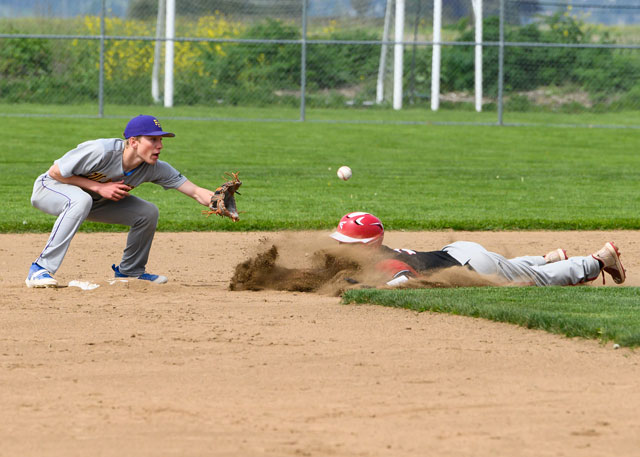 Friday Harbor, after securing a berth in the 2022 Class 2B State Baseball Tournament via a walk-off win, will open regional action against Kalama in Brewster at 1 p.m. Saturday, May 21.

Wolverine seniors — AJ Rude, Dylan Roberson, Levi Buchanan, Camden Losey and Connor Haines — will be making their first state appearance since their freshman year. Pandemic concerns cancelled postseason play in 2020 and 2021. “It was a really big goal for all the seniors,” Haines said of playing against Class 2B’s top 16 squads. Advancing to state “was a pretty big accomplishment,” the catcher added.

Harbor edged the Coupeville 3-2 at home on April 1 and fell 11-8 at Coupeville on April 27. The Wolverines clinched their 13th state baseball appearance and a Northwest 1B/2B League title by winning a rubber game against Coupeville (13-7) in La Conner on Friday the 13th. With two outs in the bottom of the seventh of the loser-out contest, freshman Graham Learing drove in the winning run by lofting the ball over the Wolves’ left fielder. 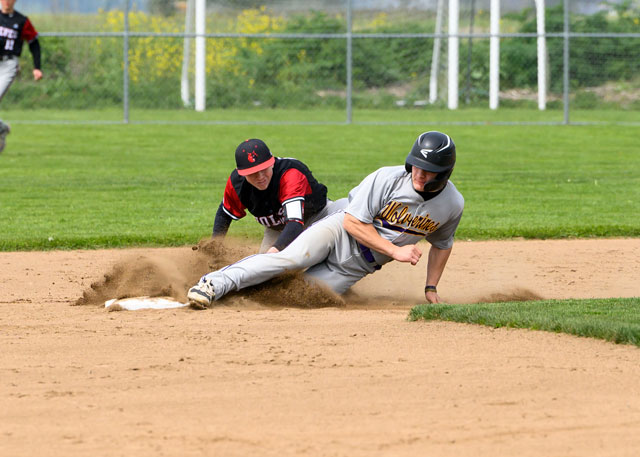 Friday Harbor threatened early in the game when Roberson doubled but he was stranded. Coupeville scored a run apiece in the fourth and fifth innings. The Wolverines knotted the game in the bottom of the fifth by “manufacturing two runs with daring base running,” said Friday Harbor coach Rich Warin. 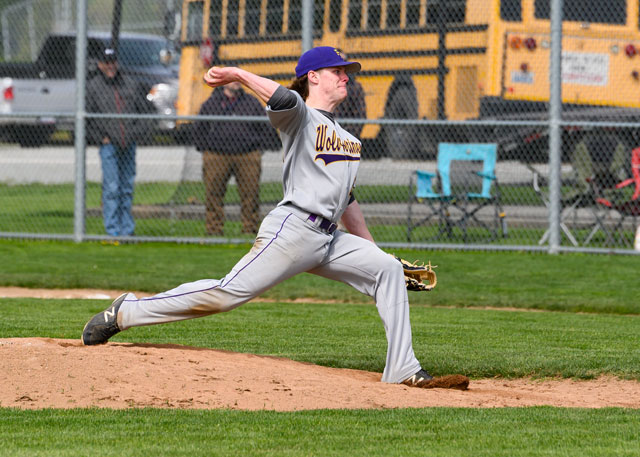 Posenjak was replaced by Pierce Kleine in the sixth and the freshman closer kept the Wolves in check for the win. “I’m really proud of Pierce,” Warin said. “Coming in in that situation, he did really well. In the last two games he struck out seven straight guys.” 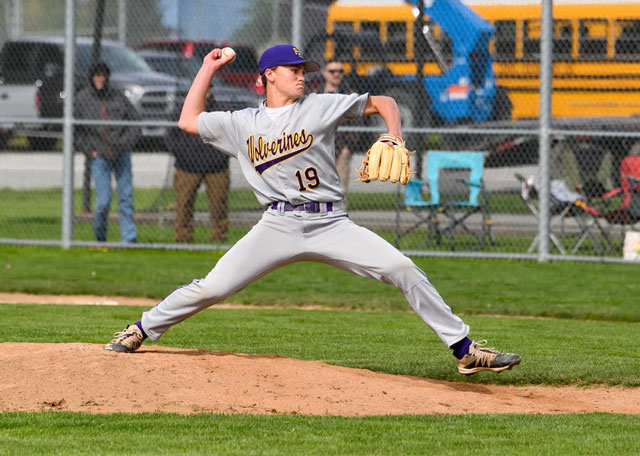 With one out in the bottom of the seventh, Haines worked a walk. Pinch runner junior Geoffrey Volk broke for second on a planned steal attempt and when Posenjak hit the ball on the ground, the Coupeville shortstop’s only play was a force out at first. Learing plated Volk with a soaring double and was promptly swarmed by his teammates. 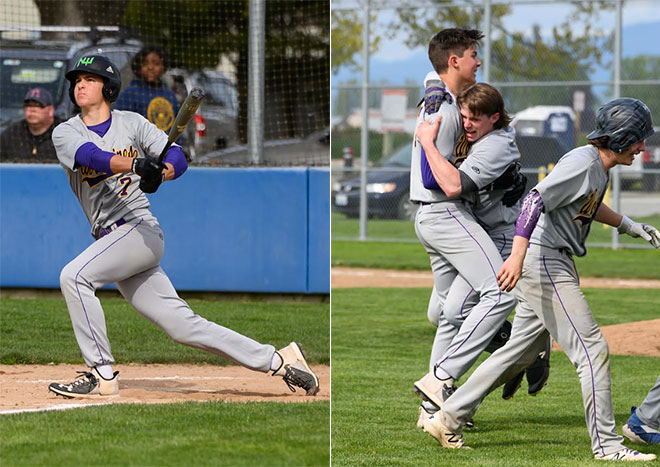 “It was definitely a one-of-a-kind experience,” Learing said. “It was my first walk-off ever, so that was pretty sweet.” 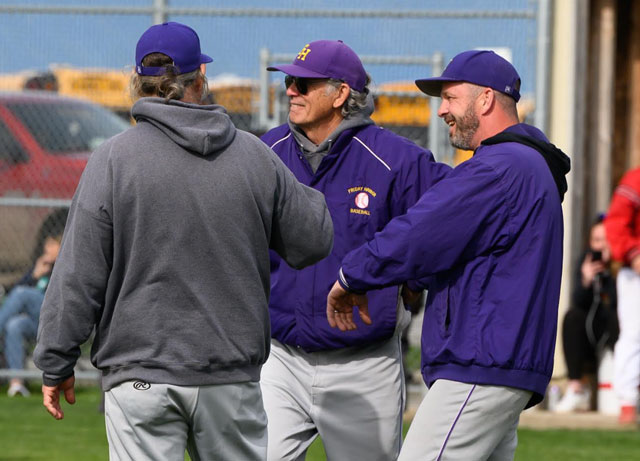 “I was impressed with the way they didn’t give up,” Schramm said.

“Wow, it was a great team effort!” Warin said. 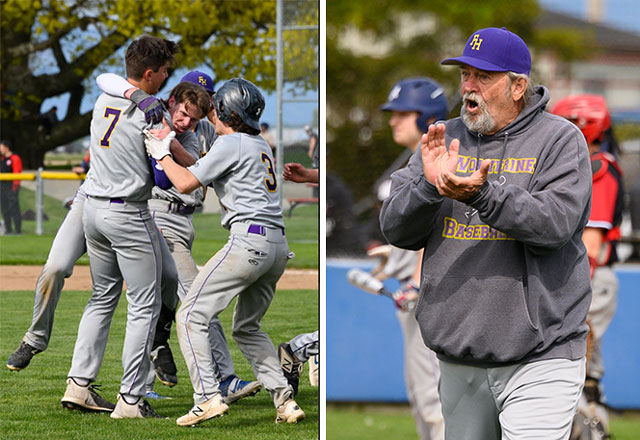 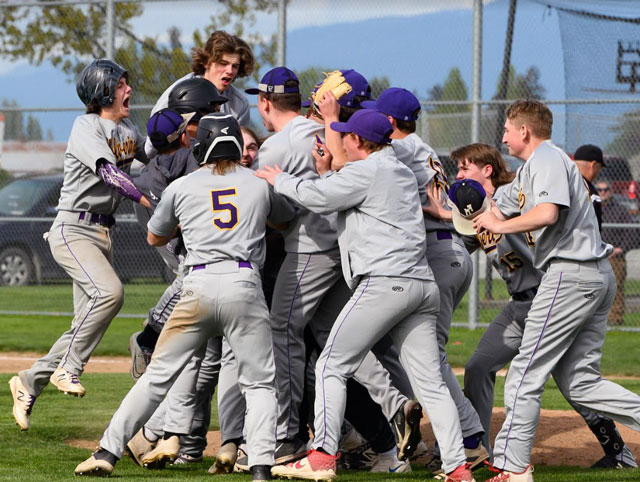 Graham is mobbed by Wolverine teammates after lofting a double to deep left field with two outs in the bottom of the seventh inning. Matt Pranger photo

More in this category: « Friday Harbor baseball team advances to the playoffs Six Wolverines advance to the Tri-District Track and Field Championships »