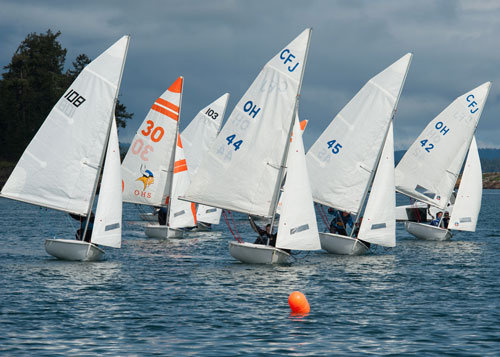 For the first time in five years Friday Harbor’s high school sailing team were able to sleep in their own beds for an Islands Cup, an annual springtime regatta that rotates around the Salish Sea. The event was held at Roche Harbor, which proved the perfect backdrop for 16 teams from Olympia to Bellingham, and without whose support the event would not have been possible.

After a day of racing in very light wind on Saturday, the teams retired to the San Juan Island Brewery for a pizza and salad feed, and some friendly games on the patio. The young sailors mixed and mingled, and their coaches compared notes and swapped stories at the Brewery’s common tables, which was a perfect ending to the first day. 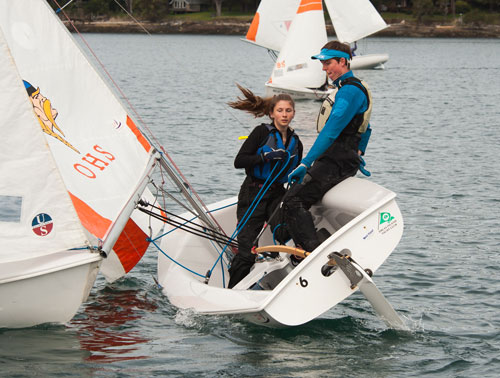 Per Black and Zoe Calverley round a mark during the 2018 Islands Cup off Roche Harbor Sunday, April 15. The pair finished first in Division A and Friday Harbor High School placed fourth in the team standings. Orcas Island High School finished seventh in the regatta. Matt Pranger photos

Friday Harbor got off to a great start as skipper Per Black and crew Zoe Calverley won the first race on Saturday morning in the light wind, netting the one point. The pair went on to have an outstanding regatta, finishing first, third, second, first, third, second and ended with two more firsts (one of which did not count in the scoring) for a total score of 13 over the two days.

The next lowest (best) boat was for Charles Wright Academy (Tacoma), with 22 points, skippered by Aliyosha Strum-Palern. Skipper Leah Black and crew Addi Kessler, Per and Zoe’s teammates, ended the regatta with 70 points, a respectable 10th in their 16-boat division.

Team Coach Bob Halliday could not have been prouder of the team and pointed out that Leah and Addi are making real progress learning this tricky sport, as evidenced at Islands Cup by their consistently good starts, and attributed some of their higher finishes to plain bad luck and the light winds.

The team’s combined total of 83 was only two points behind Olympia, which finished in third place with 81 points. Charles Wright finished in second with 65, and the regatta was won by Sehome (Bellingham) with 60.

Orcas High School also finished near the top of the 16-team fleet, finishing 6th with 110 points over the 14 races and on the heals of Bainbridge Island, with took 5th.

Race official Scott Boye of Friday Harbor did his best to get off as many races as possible in the light conditions, and was able to set a fan-friendly course with the downwind gates only 30 yards or so off Roche Harbor’s “G” dock on Sunday.

The sailors were challenged by the currents between San Juan and Pearl Islands, as they maneuvered up-wind and between the islands, and then came back into the harbor on the down-wind leg hugging the Pearl Island side to avoid the ebbing tide. Between the competitive sailing on a scenic race course, the backdrop and support of Roche Harbor, excellent race officiating, and the hard work of many other volunteers, this year’s Islands Cup was a crowning success.