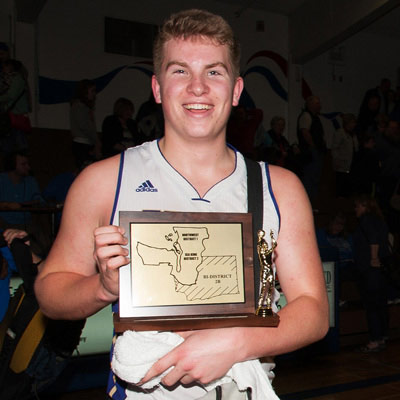 “I’m happy for these guys,” said Friday Harbor coach Rod Turnbull. “They’re really buying into what we want to do and I think they’re having fun doing it.”

“It’s pretty great that we could come together like that and play like we should,” said senior Luke Stromberg who scored 19 of his game-leading 22 points in the second half. “This win feels great but it’s just another step,” said senior Danil Sonjaya.

That next step for the Wolverines is a Class 2B Regional Tournament game Friday, Feb. 26 or Saturday, Feb. 27.

“Coming back again this year we’ll be better prepared,” Stromberg said of the Wolverines, who lost their regional contest last year.

When the 2015-2016 team takes to the court it will be an historical moment for Friday Harbor: The boys basketball program’s first back-to-back appearance in the sweet-16 playoffs. The Wolverines previously competed in the state tourney in 1932, 1985, 1991 and 2006.

Friday Harbor (18-5) struggled against La Conner (18-6) in Northwest 2B/1B League play, dropping two games to the Braves, who swept the conference. Friday Harbor dominated the post-season, though. Couple the district-title win with a 71-52 semifinal victory over the Braves on Feb. 13 and the Wolverines posted a winning margin of 17.5 points in the playoffs against their longtime nemesis.

“It was our team defense again,” Turnbull said. “They probably did better tonight than they did the first night.”

Turnbull commended his entire team for their post-season preparation. “Our team practices have really made a difference. The guys who haven’t seen the floor much during the games have really been stepping up in practice. That was difference in this game.”

Except for La Conner’s brief one-point lead early in the second quarter, Friday harbor led the entire game. The Braves canned three consecutive three-pointers at the start of the third quarter to trim the Wolverines’ lead to a point, but Turnbull called a timeout. His players refocused on defense and pumped in 35 points to the Braves' 15 in the final two quarters.

Stromberg drilled five three-pointers and went 3-for-3 from the free-throw line. The Braves also struggled to stop senior Kyle Jangard, who dumped in 18 points.