For the second time in two days Friday Harbor’s defense lowered the boom on La Conner’s offense and raised the Wolverines to a 29-25 victory at Sedro-Woolley High School Feb. 20, 2016. With the win in the loser-out game, the Wolverines secure the Class 2B District 1 Title and a berth in the state tourney’s sweet-16 round. 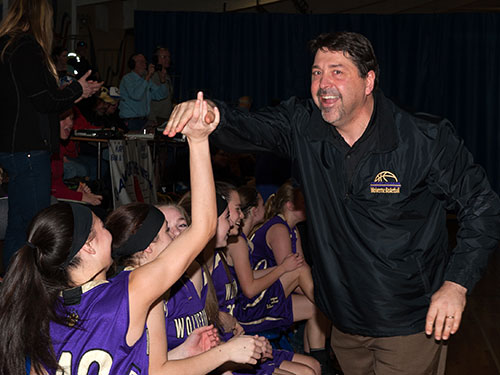 “Grit... Wasn’t that impressive,” said Friday Harbor coach Fred Woods of his Wolverines, who finished the game with a 9-2 run. “Our players just don’t quit under pressure.”

In their second consecutive appearance in the Hardwood Classic’s Regionals Friday Harbor will face Wahkiakum at 4 p.m. Saturday, Feb. 27 at Mount Vernon High School. The winner advances to the state tournament’s elite-eight round in Spokane March 3-5.

With the win over La Conner, Friday Harbor won what became a best-of-five series between the highly-competitive Northwest 2B/1B League rivals. The teams split their conference meetings, the Braves won the second-round district game and the Wolverines were victorious in the semifinal and final contests.

“We beat ‘em when it mattered,” said senior Allie Galt, who recalled losing to the Braves in the Class 2B State Volleyball Tournament. “It feels good that we never have to La Conner again.”

“They’ve held this title for four years,” said Friday Harbor junior Hayden Mayer. “It was time for us to take it back.”

“This feels good,” said senior Lili Wood. “The hard work we’ve put in over the season is paying off.”

The Braves’ 25 points in the championship fell 21 under their season average. “In both games we held them 30 points or under, which is crazy,” Galt said.

The Wolverines limited the Braves’ top scorers -- Nakesha Edwards and Nakiya Edwards -- to two points apiece. The trey-raining pair combined for 29 of La Conner’s points in a 47-34 win over Friday in the second round of the district tourney on Feb. 12.

Woods also credited La Conner’s defenders in the defensive thriller. “They did a good job defensively, too,” he said.

Woods commended his young reserves who ran versions of La Conner’s defense and offense in scrimmages. “The way these guys practice was how we got the looks that we need,” Woods said. “This was a total team effort.”

As in the semifinal match-up, Friday Harbor’s offense started sluggishly and the Wolverines trailed 10-4 with three minutes to go in the second quarter. Senior Madi Kincaid, who led all scorers with 12, provided the Wolverines’ offensive spark by drilling a three-pointer, sinking a two-point bucket and popping another trey before the half.

Friday Harbor led 16-14 at halftime but La Conner went on a 7-0 run for a 21-18 lead in the third quarter. The Wolverines’ most-recent comeback started with Mayer making a free-throw. Kincaid drove baseline-to-baseline and finished with a lay-up to tie the game 21-21.

The Braves scored two to enter the fourth-quarter up 23-21. Mayer sank a free-throw and Ashley Watkins put one in for La Conner to keep the Braves up 24-22 with about three minutes to go.

Galt drove to the hoop and for the game-tying layup and and was fouled. She hit the plus-one and the Wolverines led 25-24. Mayer snatched a defensive rebound and muscled up an offensive board to put Friday Harbor up 27-24 with 1:37 remaining.

La Conner’s Kamea Pino connected on a free throw to keep the Braves alive at 27-25 with 27 seconds left. The Braves fouled Kincaid three seconds later. The game’s leading scorer missed the front-end of a one-and-one but responded by blocking a Brave’s game-tying attempt at the other end.