Friday Harbor crushed Concrete 10-1 in the Class 2B District 1 Championship at Stanwood High School Friday, May 20, 2015. With the win the Wolverines secured a return trip to state tourney in Yakima May 27-28, 2016. 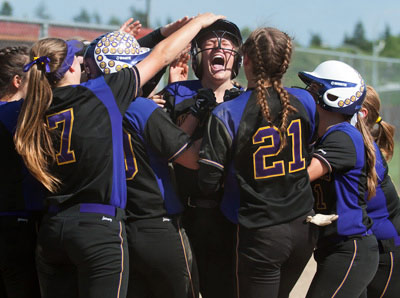 "This team deserves it," said senior Samantha Finch. "Getting first in district is awesome."

"This (winning district) is just the step where we want to be," said senior Fiona Sutherland. "I'm beyond happy. It's the highlight this year."

Friday Harbor (15-5) will open the double-elimination state tourney at Yakima’s Gateway Sports Complex on Friday, May 27. Their opponent is not determined yet because some district’s qualifying games were postponed due to stormy weather May 21.

Before the district championship head coach Brian Lambright and Holt told their players they had been “coached” enough and now they needed to apply their knowledge on the field. "We told them it was time to step up and play as a team," Holt said.

The Wolverines swept their Northwest 2B/1B League foes en route to the conference crown and held off Orcas Island 7-6 in the first round of district play. They attained another level in dominating Concrete for the district title.

"They're producing and playing with confidence and that's really fun to watch," Holt said.

Friday Harbor scored at least a run in every inning against Concrete except the last: Since they were the home team, and led 10-1, they didn’t need to bat. The Wolverine coaches were pleased stressing “hit it hard” to their players in practice all season showed results on the diamond.

"We had that picket fence going all the way to the seventh inning," Holt said.

"We’re definitely better hitters this year,” said Wood, who plated four runs on three singles and a triple for the Wolverines.

Junior Hayden Mayer blasted a two-run homer and a double. Junior Cady Wilson rapped two base hits and drove in a run. Sutherland and junior Hannah Hopkins doubled in a run and sophomore Savannah Hoffman singled one home. Junior Emma Wickman and junior Alexa Mora had a base hit apiece. Finch, out much of the season with a leg injury, connected for a sacrifice. Freshman Ava Hoffman stole a base.

Wickman, who didn’t allow a baserunner until the fourth inning, recorded the victory. The hurler struck out five batters, walked one and scattered three hits.

The Wolverines went 0-2 at last year’s state tourney but the seniors believe they are more prepared this season.

“Having been there before we know what to expect... We're more of a team than last year," Wood said.

"We just have to take that same energy and love for each other to state," Finch said. 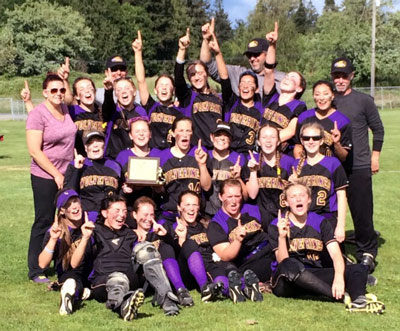 at the Class 2B District 1 Fastpitch Tournament.   Photo by Shannon Wilson